Need You Tonight, the first single from Kick, was released on 23rd September 1987.  Recorded at Rhinoceros Studios in Sydney in 1987, it was written by Andrew Farriss & Michael Hutchence, produced by Chris Thomas and mixed by Bob Clearmountain at Air Studios in London. 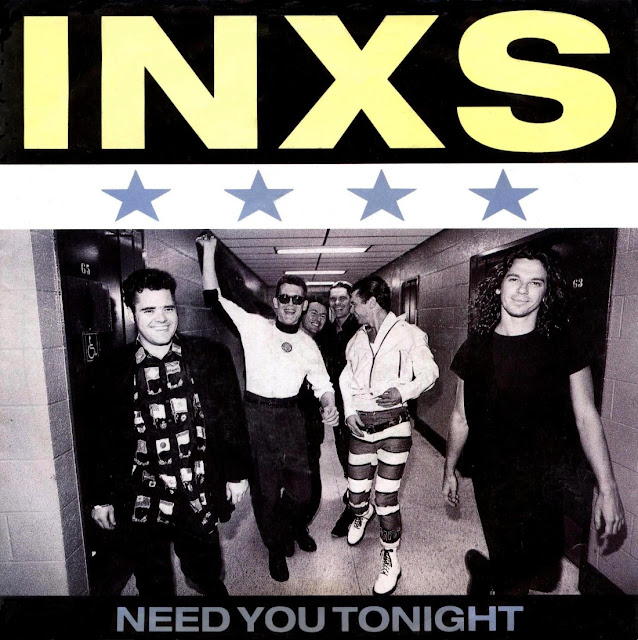 It was the only INXS single to hit number 1 on the US Billboard Hot 100 and stayed on the chart for twenty-five weeks (going on to sell six million copies).  It became the band’s highest charting single in the UK, reaching number 2 when it was re-released in 1988 (and stayed on the charts for fourteen weeks), having only achieved number 58 on its original release.  It peaked at number 3 in Australia (with twenty-four weeks on the chart), hit number 2 in Ireland and Canada, number 3 in New Zealand and was a top 10 hit in Belgium and South Africa.  Following the screening of the Never Tear Us Apart mini-series, it re-entered the Australian chart as a download for three weeks in February 2014 and peaked at number 28.

Need You Tonight was one of the last songs written for the album.  When Chris Thomas compiled the songs they had he felt, as also happened with Listen Like Thieves, that something was missing and suggested Andrew & Michael go off to write some more.  As that last occasion had yielded their first worldwide hit with What You Need, they agreed to spend a fortnight at Michael’s apartment in Hong Kong.

In late June “I was working on this thing at home,” said Andrew in interview, “and I wasn't sure what it was, it wasn’t exactly what was going on a lot on the radio, either.”  He was worried it was something he’d heard before, that it “was kind of weird, even 1970s-sounding.”  He realised he needed to capture it but his taxi, to get him to the airport in time for his flight, had arrived.  Telling the cabbie to hold on, he quickly recorded the riff and chord sequence on tape and set up a “groove on a drum machine and it was all getting very technical.”  When the cabbie knocked on the door, Andrew “thought he was going to [go] and I had this moment of paranoia, like ‘Don’t leave!’”.

Arriving in Hong Kong, he went straight to Michael's apartment at the Watson Estate and played what he had.  "He loved [it] and said, ‘Give me a pad and a pen.’ He sat down and wrote the lyrics in something like an hour.  Michael was always naturally gifted in his ability to articulate his thoughts poetically on paper.”

Mediate was written as a stand-alone song but Chris Thomas decided to link them (they share the same bpm) and whilst on some compilations the two songs appear together, Need You Tonight often appears on its own (something Mediate rarely, if ever, does). 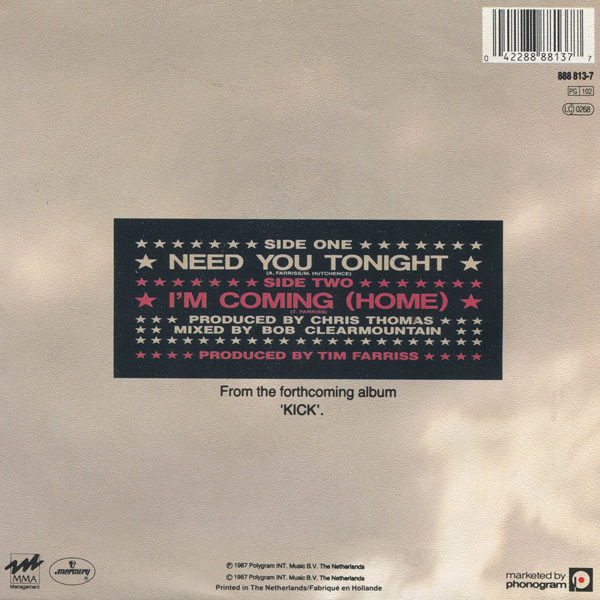 Richard Lowenstein was a longtime collababorator with the band, starting with Burn For You on The Swing album and his video for What You Need had helped propel the song to being a big hit (it was very popular on MTV).  On that, he and Lynn Maree Milburn - his animator and partner - had started using a technique involving a collage of photocopied and hand-tinted pictures over moving images.  Chris Murphy, INXS’ manager, gave him a pre-release cassette of Kick and asked which song he felt would make the best video.  Lowenstein said, in interview, there were “some good songs but if you make Need You Tonight the first single, I can make you a landmark video.”  When told it would take three months to make, Murphy wasn’t happy but he deferred to the director.  “It was more conscious than other videos I made,” he said.  “It spoke to me with all the funk and syncopation and clean sounds. I knew I could do something with all those rhythms, Michael’s sexy, I said that’s the one.”

The effects were created by cutting up 35mm film frames and photocopying them, before relayering those images over the original footage.  “This was before scanning,” said Lowenstein.  “Colour Xeroxes were just coming onto the market and you could get [them] to move like a picture. We had the very first video layering computer, it was a real novelty at the time.”  As it was, Lynn Maree Milburn ended up mounting more than 3,000 colour photocopies.

The rat, which got its own thank you in the liner notes for Kick, was called Plague and belonged to Michael’s brother Rhett.

Need You Tonight was nominated for eight awards at the 1988 MTV Video Music Awards, making INXS the nights biggest nominee and winner, taking home five of the trophies (for Viewers Choice, Video Of The Year, Best Group Video, Breakthrough Video and Best Editing In A Video).


This performance was shot at Summer XS, Wembley Stadium, 13th July 1991 - a concert I was lucky enough to attend - and later released on the "Live Baby Live" DVD, directed by David Mallet.

Happy 30th, Need You Tonight (where did all that time go, eh?)