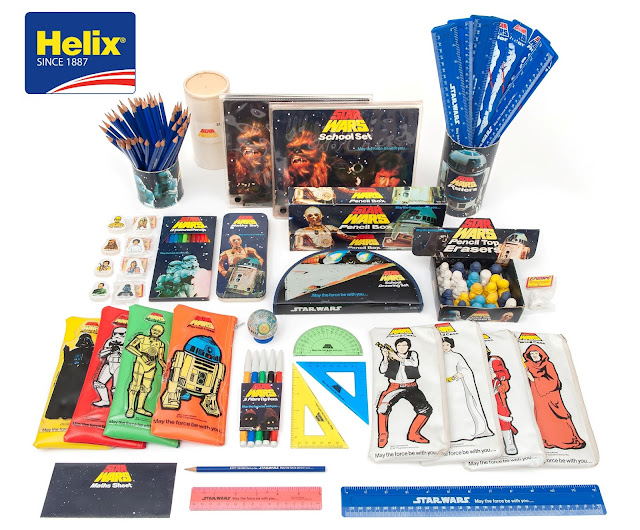 The Universal Woodworking Company Ltd was formed in 1887, making wooden rulers and metal laboratory apparatus.  It patented the drawing compass in 1894 (launching the Helix brand) and created its first mathematics set in 1912.  The brand of Helix Oxford was created in 1935 and Helix International Ltd is now part of the French-owned Maped group. 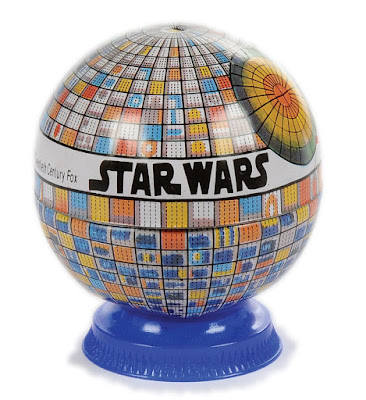 Helix was thriving in 1977, buying up smaller companies like Dunn & Taylor (who made cash boxes) and Colonel Rubber Ltd (who made rubbers - erasers, for American readers) and consolidating their brand.  Starting in March 1978 they produced a wide range of Star Wars branded stationery, including vinyl and wooden pencil cases, rulers, pencils (and toppers), geometry and maths sets, pencil sets and die-cut rubbers.  They also made the fantastic Death Star pencil sharpener, which was later made famous by its prominent inclusion in Stephen J. Sansweet’s Star Wars: From Concept to Screen to Collectible book.

Craig Spivey, a noted Star Wars collector, said, “These products were appealing to kids because they were bright and incorporated their favourite characters. There was even a chance to win a Star Wars school set by collecting tokens from tins of Heinz Beans and sausages.”

I had some pencils, the small ruler and a couple of pencil toppers but they are all long since gone.  Since school stationery was bought to be used, the items either ran out (pencils and rubbers), got thrown away or put in the loft (moving into the eighties and comprehensive school with a Han Solo pencil case perhaps wouldn’t have worked).  As a result, as Craig Spivey says, “the products have become incredibly sought after.”
The school set, a zipped half-moon that opened, comprised 4 coloured pencils, a compass, a stencil, set squares, protractor and pencil.  The tin maths set, on the other hand, contained pencils, a protractor, a compass, angle rulers, a stencil but also came with a mini Millennium Falcon poster.  I would gladly have either today. 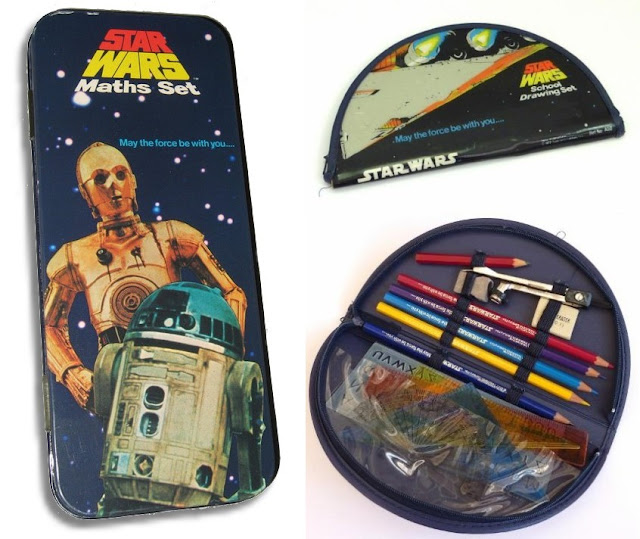 When I started collecting vintage Star Wars merchandising again a few years ago (see my post here), I often had a look at ebay to see what was about and was very surprised at the price some of the items were going for.  Even the Stormtrooper ruler (which I would love) is fetching prices of upwards of £35!

I’m in my late forties and if you ask anyone of my generation what Letraset is, most people will quite happily tell you they made transfers.  If you were making a poster, booklet, student magazine or anything else where you needed a professional look, you’d buy one of their sheets of type and painstakingly rub off the letters you wanted, on a pencil line you’d carefully drawn (and would equally carefully rub away, so you didn’t accidentally rub off any of the transfer either).  The result often looked wobbly but generally very good.

Letraset was founded in London in 1959, introducing ‘innovative media’ for commercial artists and designers.  It later moved to Ashford, Kent and is now based in Le Mans, France.  Their original product was the Letraset Type Lettering System but, in 1961, they created a revolutionary dry rub-down method they called Instant Lettering and it became their core product.  In 1964, the company applied the dry rub-down technique to a children’s line called Action Transfers.  Following the birth of home computing (when loads of fonts were suddenly at consumers fingertips), sales declined but since Letraset held the rights to their fonts they entered the digital market and also began to manufacture art marker pens.  They also, fantastically, still make transfer sheets for when designers want to avoid a samey-digital look.  The company was purchased by the ColArt group in 2012.
During the 1970s, Letraset bought licences for its Action Transfer line, including The Wombles, Super Action Heroes (DC comics), Duckhams Grand Prix, Paddington Bear, Captain Scarlet, Dr Who, Space: 1999 and some Disney lines.  They also, smartly, were one of the early Star Wars licencees.  Reacting quickly to the success of the film, the first Letraset transfers (with artwork by David Clark) appeared on the back of Shreddies boxes with four scenes (Capture Of The Rebel Cruiser, Escape From Mos Eisley, Breakout At Prison Block and Escape From The Death Star), each with their own set of transfers. 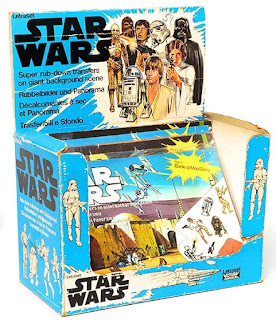 Transfers were free gifts in Look-In magazine (which I wrote about here) in the w/e 11th March issue and Star Wars Weekly No.9, dated 5th April.  In addition, Wall’s ran a promotion with its sausages and there were blocks of six sheets available in the Star Wars Space Writing Set.

Letraset released three sets (known as L46) - Battle At Mos Eisley, Escape From The Death Star and Rebel Air Attack - which all featured panoramic backdrops with excellent and detailed painted backgrounds.  As with the Topps cards, they were an ideal way to re-live the film, capturing a moment (though one as interpreted by Letraset’s artists) that would then become iconic to us and there’s a lovely sense of nostalgia seeing these images now.  These sets went into a second printing as Letraset were taken by surprise at their popularity and John Hunt, the brand manager at the time, later said “the Star Wars sets were probably the most successful transfer set ever made.”
More products were required and Letraset responded with a smaller format 10-part series (known as L46) that ran chronologically through the film.  Thankfully, the production rush didn’t result in a lack of quality, as it says on the Action-Tranfers site, “the backgrounds in particular are excellent and very well suited to the requirements of the medium.”  The series comprised Kidnap Of Princess Leia, Sale On Tatooine (the only one I have left in my collection), Action At Mos Eisley, Escape From Stormtroopers, Flight To Alderaan, Inside The Death Star, Prison Break Out, Death Star Escape, Rebel Air Base and Last Battle.  Looking at these images now, it’s interesting to note where artists and designers didn’t have access to information from Lucasfilm (there were no technical manuals or books of blueprints back then) so the Millennium Falcon (in set 5) had a large viewing window with the hold area (scene of the chess set) opening onto the cockpit.
And this is what the background looked like without my handiwork...
The final Star Wars transfer set came as part of a promotion from the Wimpy restaurant chain (which dominated UK fast food in the 70s, when very few people had heard of McDonalds), where you got a set free with every Maxi Quarterpounder or Wimpy Kingsize hamburger.  The set featured Luke, Darth, Chewbacca, C-3PO, R2-D2, a Stormtrooper, a laser blast and two Wimpy logos but there doesn’t appear to have been any artwork to apply the transfers to.

In the late 70s, Letraset Consumer Products branched out into character-licensed stationery with four main ranges - Star Wars, Super Heroes (DC again), Thelwell (whose wonderful artwork and cartoons now, sadly, seem to have faded from view) and posters (that the kid got to colour in themself).
I had a few of the Star Wars books though, since I was nine at the time, none of them are in pristine condition.  C-3PO’s Exercise Book ('24 page feint ruled exercise book’) and R2-D2’s Memory Bank (’56 page feint ruled notebook’) are both A5 format, Chewbacca’s Space Notes (‘56 page feint ruled pocket book’) is A6 format and the Storm Trooper (sic) Manual (’32 feint ruled pocket book’) is A8 format (and features a flipped version of the iconic image, where Harrison Ford enters the control room - which I wrote about here).  The back of the Chewie and Trooper books are starfields, C-3PO is backed by ‘Intergalactic Translations’ (English, French, German, Italian) and R2-D2 is backed with times-tables (2 to 12).
Of their time certainly (I haven’t seen transfer sets for a long time and most of the Star Wars related stationery now is all built around one or two images, though I have bought them and put them away) but definitely great fun, the Helix and Letraset lines were big parts of my childhood love for Star Wars and provide a warmly nostalgic nod back to the late 70s.


As a "special edition", Maped Helix have released a whole range of "40th Anniversary" stationery items - repro versions of the pencil cases, maths set, rulers and pencil sharpeners, just in case you missed them the first time around.