Back in 1977, I was very much aware of Star Wars and eager to get my hands on anything related to the film (since I wouldn't get to see it until 1978).  A couple of years before, I’d collected the Topps Planet Of The Apes TV show cards and so, whenever I saw one of their boxes in a corner shop, I took a look.  One day, when we were in Rothwell visiting relatives, I went to the corner shop and saw a box of trading cards with Star Wars art on it.  Thrilled, I bought a pack and I can still vividly remember how I felt then, excitement running through me as I walked back in bright sunshine, looking at those cards.

I only collected the first series (I didn’t even realise there were more until much, much later) and loved them.  With that in mind, for the 4th entry in my Star Wars At 40 thread, I thought I’d take a look at the Topps Stars Wars cards.
The Topps Company Inc. was founded in Brooklyn, New York, in 1938 and grew out of the American Leaf Tobacco Company, which was started in 1890 by Morris Shorin but hit difficulties during World War I and the Great Depression.  Shorin's sons decided to focus on a new product, chewing gun - still a relative novelty then - selling it through their existing distribution channels.  Their most successful product, Bazooka Bubblegum, was packaged with a small comic on the wrapper and in 1950 the company tried to increase sales by teaming the gum with trading cards featuring popular TV cowboy Hopalong Cassidy.  In 1952, Topps released their first baseball set, making their name and allowing them to branch out into other sport, TV, film and music brands. 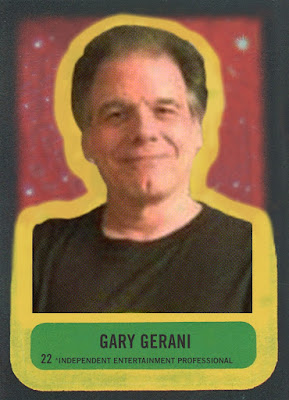 Gary Gerani joined Topps in 1972 as a copywriter and ‘ideas man’, hired by NPD (new product development) creative director Len Brown, who created the Mars Attacks series.  Impressing Brown with his love and knowledge of popular entertainment, he began working with screen properties that could be developed into a child-friendly format of cards and stickers.

“Movies were generally considered an iffy proposition for trading cards prior to Star Wars, because they came and went so quickly,” Gerani said in interview.

With renewed interest in Star Trek, he created a card set of the TV show in 1976 that didn’t sell at all, which cast a pall over future SF-orientated sets.  In 1977, when 20th Century-Fox merchandising executive Marc Pevers pitched Star Wars to Topps, it was an uphill struggle, even though Gerani and Brown could see potential in the images they were presented from Charles Lippincott of Lucasfilm.  Topps president Arthur Shorin said no initially but as he began to hear more about the film in pre-release buzz, changed his mind.  After an initial period of confusion - Fox had sold the toy rights to Kenner who had their own card company, Donruss, but they passed on the idea - Topps was awarded the licence and the creative team watched the film.

"What a memorable experience that first viewing was," Gerani wrote in Star Wars: The Original Topps Trading Card Series, volume 1 (which I reviewed here).  "It was as if Walt Disney had made the grandest futuristic fable of all time, freshly alive with colour, music, jaw-dropping special effects and heart."

As quickly as possible, they put together a 66-card set (along with eleven stickers), wrapped in wax paper with a stick of pink bubblegum and released it to coincide perfectly with the pop culture explosion Star Wars enjoyed on its release.

That first set was printed from 35mm slides but because there were so few photographs available, a lot of the images were, by then, iconic, having appeared in newspapers and sci-fi magazines like Starlog and Starburst.  Also, since the images came from the unit photographer (ie, taken during filming) there were no special effects shots, apart from a couple of airbrushed images.  In addition, to keep a sense of mystery about the sequence, no images of the cantina scenes were released.

As well as choosing the photographs and designing the cards, Gerani also wrote the captions and back cover copy.  The first set, released in 1977 and the one I collected, was blue bordered and 'flecked’ with stars and a black outlined star burst showed the card number and Star Wars logo.  The point of sale box used artwork designed around the famous Brothers Hildebrandt poster but painted by Topps staff artist Augie Napoli (his widow apparently still hangs the artwork proudly in her home), who also painted the artwork for the wrappers too.

The first series went through the roof in terms of sales, vindicating Gerani and Brown’s faith in the project and Gary went to California to meet with Lucasfilm and go through their photo archives, looking for images for series two and beyond.
“Charlie Lippincott turns up often in the ‘movie facts’ card text,” wrote Gerani, “as he was feeding me sound bites at every opportunity back then.”  With regards to the images, he said “We did everything possible with what we were given but our need for additional pictures was extraordinary. We tried flopping, cropping, airbrushing… anything we could to stretch the soup. The redundancy of image content bugs me to this day.”

All of the series featured 66 cards and 11 stickers.

Series one, with C-3PO on the wrapper, had the cardbacks split with a Story Summary (11 cards), Movie Facts (11 cards) and two puzzle pictures (the box cover art and the classic Millennium Falcon cockpit shot of Chewie, Luke, Ben and Han).
Series two, with Darth Vader on the wrapper, had a red border with no flecking.  The cardbacks were split with Actor Profiles (11 cards, replacing the story summary), Movie Facts (11 cards) and two puzzle pictures (Chewbacca and a Tusken Raider).

Series three, with R2-D2 on the wrapper, had a yellow, unflecked border.  The cardbacks were split with Official Descriptions (22 cards, replacing the Profiles and Movie facts) and two puzzles (Luke, Leia and Han in a Death Star corridor and R2 being loaded onto Luke’s X-wing).
Series four, released in 1978, featured Ben and Luke on the wrapper and the cards had a green unflecked border.  This time around, there were 22 Movie Facts cards and one big puzzle (Han and Chewie outside the Millennium Falcon).  This set also included the now-notorious card 207, which features a visibly excited C-3PO (the image was released but replaced, though ironically it’s the replacement card that is more valuable today).

Series five featured Luke’s X-wing on the wrapper and a starburst proclaiming “New!  Cantina Scenes!”.  Since most of the photographic resources had been mined, this set included a lot of behind the scenes images, both of the production in London and also the special effects work at ILM in California.  There were also plenty of cantina images which, looking back on them now, feel even more warmly nostalgic since several of the monsters were replaced in the Special Editions.  As with Series four, there were 22 Movie Facts cards and one big puzzle (the Duros aliens from the cantina, who are only glimpsed for a few seconds in the film).
In his book, Gerani wrote, "One of  the cool things about Topp’s Star Wars trading cards was that they froze a specific moment from the movie and fanciful elements could be analysed at length.  This was the pre-video age, so what flashed by on the big-screen was all you had to savour until you saw the film again - or bought some of our trading cards”  And I couldn't agree more.

“I have a special fondness for our first series,” he said in interview, “the one with little hand-drawn stars within the blue borders. It brings me right back to ‘the good old days’.”  Looking at these images does exactly the same thing for me today.  Not only are most of these iconic, but they also transport me back to that excited eight-year-old kid, looking at each image and trying to figure out how it all fitted together.

Thank you, Topps and thank you Gary Gerani!

all blue and yellow border cards scanned from my collection