This man is one of my heroes and he's appearing at Milton Keynes theatre in November.

I work in Milton Keynes.  I have already booked tickets.  I am already fanboy-ishly excited! 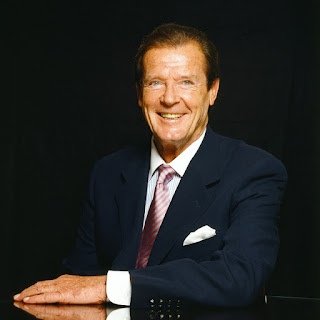 Sir Roger Moore, the legendary film star who played the iconic role of James Bond, is to play a series of exclusive dates at theatres around the UK. Following the huge success of his tour last year, Sir Roger will return with ten new dates in Autumn 2013.

Roger will be discussing his astonishing life and career, with inside stories and exclusive anecdotes ranging from his internationally-renowned TV series The Saint and The Persuaders, through to Hollywood blockbusters and, of course, the 007 films, in which he starred as James Bond between 1973 and 1985.

Gareth Owen will interview Roger. Gareth is an author of nine books and has worked with Roger Moore on his autobiography My Word Is My Bond and his latest book Bond On Bond. Gareth has interviewed Roger previously at the BFI Southbank, the Barbican Centre and at various UNICEF fundraisers throughout Europe. The show will be followed by an audience Q&A.

Presented by Jeremy Meadow & Suzanna Rosenthal, by arrangement with Pollinger Limited.
Posted by Mark West at 15:35:00