As regular readers of this blog might have noticed, I am something of a nostalgic (for further evidence, why not check here, here or here) and even though I very much live in the present (my 6-year-old son sees to that), I do like looking back. With eBay, 2nd hand bookshops and some terrific retro-shops that are springing up, it’s now easier than ever to put your hands on stuff you had through your childhood but have long-since-lost. This blog post is about one such item.

Years back (I now know it to have been 1980, when I was 11), I read a comic/magazine (a full version of a story) and really enjoyed it. I’ve been trying to remember key details for the last ten years or more, but all I had to go on was that it featured an octopus, in a skyscraper in New York and a character called Dum-Dum Dabroda. I knew that the artist was the same craftsman who drew “The Hitman” in Bullet, but that was as far as I got (I didn’t know his name).

Every now and again, I’d get inspired to investigate and search with what I remembered but nothing ever came up. Then, one day last week, I was looking up something about Bullet, a terrific comic from my early childhood and saw the phrase Red Dagger Books. Intrigued, I clicked the link and vague memories were stirred. I scanned down the titles and there, issue number nine, was my quest.

Terror In The Tall Tower was published in 1980, a compilation of the adventure which first appeared in Wizard Comics from issue 28, 28th September 1974 through to 28th January 1975. The artwork was by Denis McLoughlin and the cover art was by Ian Kennedy. 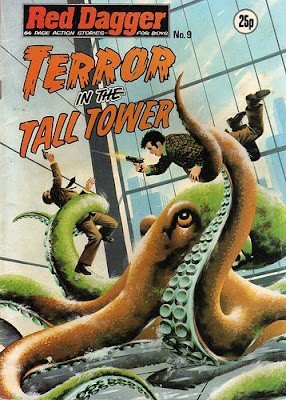 This is the Ballard Building, situated in Downtown Manhattan, New York, USA. It looked alright but what nameless terror lurks behind its walls? A terror that has kept the building empty for years! Young Don Ballard must find out what brings fear to its rooms and corridors - for Don has become the owner of The Ballard Building.

I got the octopus and the skyscraper right, I remembered some of the images as I saw them but I got the villain’s name wrong - he’s Dum- Dum Taborda, not Dum-Dum Dabroda. 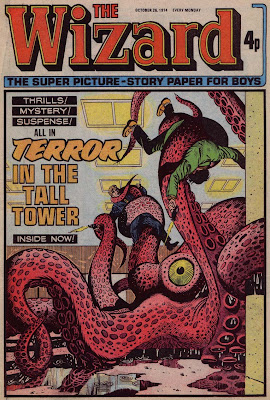 Cover art from the October 26th 1974 issue of Wizard, by Denis McLoughlin

All excited, I immediately checked eBay and there was a copy on there, so I put in my bid and spent an anxious few days waiting to see if I’d won. I had, it was delivered to me earlier this week and I’m reading it now. I’m not going to lie and say it’s great literature but blimey, it’s bloody good fun!

(with thanks to Kelly’s Comics and the British Comics Art blog, for background information)
Posted by Mark West at 15:51:00