On Friday, through a friend’s Facebook update, I found out there was a Memorabilia fair at the NEC, in Birmingham. I’ve wanted to go along to one for years and, after having had a crap few weeks at work, thought it’d be a nice treat. With the promise that there would be plenty of Mario-related toys, I convinced Dude to accompany me.

We headed off on Saturday morning and I was overwhelmed with the scale of it all - I’d expected a big area, with plenty of stands, but this was just so much more. The second stand was selling badges and we were off, with Dude picking up a load and me finding a Six Million Dollar Man one. We worked our way around the place, meeting various characters on the way - Darth Vader, R2-D2 and the Stig were quite happy to pose with Matthew and Michael Myers and Freddy Krueger approached us, but Dude saw them off with a swish of his newly-bought Lightsaber. He got to sit in the DeLorean (“you’re Doc Brown,” he said to the man running the stand), we picked up a few Mario characters for him and I got a couple of vintage Stormtroopers to add to my growing collection. 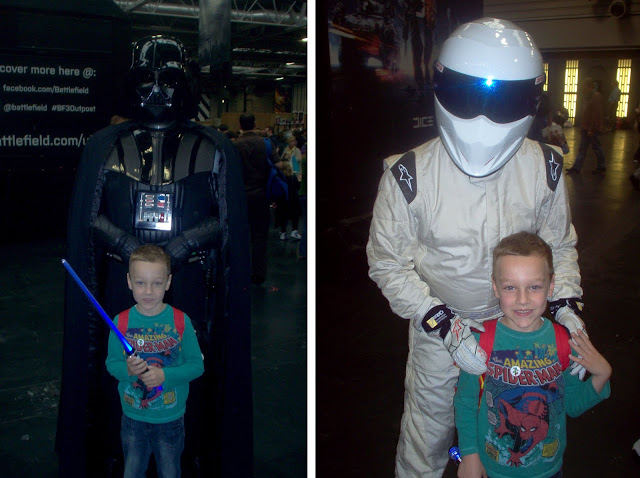 In the centre of the hall were the famous faces, little booths where you could meet and greet and get autographs from actors who’d been in various sci-fi/fantasy/horror films over the years. I’ve never been a big one for collecting autographs (though I’d queue for hours to get Roger Moore’s), though seeing Ian Ogilvy’s name (he had a white XJS across from him) made me pause - but he was at lunch. We walked around the corner and, out of idle curiosity, I checked the names of the people there. And stopped. Dude stopped too and looked at me, frowning.

I got a tap on the arm for the swear word (Alison has declared ‘crap’ in that category) but it didn’t matter. I was standing across from the booth that Caroline Munro was signing at (she must have been at lunch with Ian Ogilvy at the time).

“We have to come back,” I told my six-year-old son, as if our roles had been completely reversed and I wasn’t the forty-two-year-old Dad in this scenario, “I can’t miss this opportunity.”

“Okay then,” said Dude, “can we go and see if we can find Donkey Kong now?”

In order to understand just why this was so important to me, we have to go back to the mid-70s. I would have been 8 or so and, when my parents took us shopping (usually on a Friday night, to Sainsbury’s in Corby town centre), I’d sometimes go out to explore. Near the old fountains (long since gone now), there was an advertising hoarding and sometimes I’d look at it, sometimes I’d ignore it. One day, it was an ad for Lamb’s Navy Rum. And I fell instantly in love with the model on it, her wet-suit zipped down to her belly, her cleavage glistening with water - she had a pretty face, long dark hair and I knew I was in love. 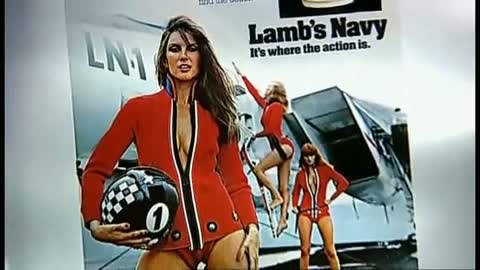 A little later, I went with some school-friends to watch a couple of Sinbad films at the cinema, a double bill of “The Eye Of The Tiger” and “The Golden Voyage”. And there, in the latter, was my lovely lady. Later still, Dad took me to see “The Spy Who Loved Me” (which remains, to this day, my favourite Bond film) and there she was, flying the helicopter during the exciting Lotus chase sequence. It was her, the Lambs Navy Rum girl, all pouty and pretty and with cleavage on show.

I stayed for the credits and found out her name was Caroline Munro and my crush was then complete. As the 70s eased into the 80s, she made films - “Maniac” and “The Last Horror Film” - that I didn’t have a chance of watching, then appeared as a hostess on “3-2-1”, a Saturday night gameshow that initially I had to endure because the folks liked it, until Ms Munro appeared. 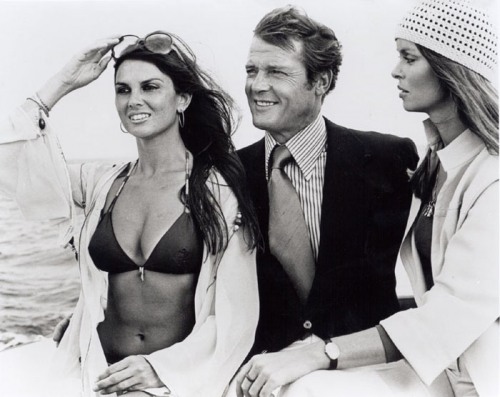 Even though I stopped watching “3-2-1” soon after (and still haven’t seen those horror films), I never forgot Caroline Munro and she’s always had a special pull for me - very pretty, very sexy but somehow curiously safe (in that English way) - and she’s the one woman I say I fancy where Alison doesn’t roll her eyes.

Anyway, back to the present, back to 2pm on Saturday 19th November 2011. After getting Donkey Kong for Dude, we made our way back to the booth that Caroline Munro was based at. There were some people in front of us, talking to her and my nerves started to get the better of me. What should I say? Is it polite to say to a lady that you’ve had a crush on her for almost 35 years - would I sound like a pervert? Would it worry her? Should I mention her films? Perhaps the fact that Dude & I have recently re-discovered “3-2-1” on Challenge TV and had seen her only the last week on there?

The people in front of us moved away. We stepped forward. The still-very-attractive Caroline Munro looked up and smiled and my heart melted - all of a sudden, I was 8 years old again, staring at that Lambs Navy Rum poster.

“Hello,” she said and, before I got a chance to say a word, Dude said, “hello” and that was it, they were off. She asked him his name, how he liked school, what his favourite lessons were. They chatted easily, taking in everything from maths to Super Mario and I stood there like a spare part, still trying to figure out what to say. Should I mention that I’d found the old ads on the Net? Should I mention that her wink, just before she tries to destroy James Bond is still one of the sexiest moments in film for me?

“I’m almost speechless,” is the classic line I eventually came out with, “you have no idea how much of an honour this is for me.”

She smiled and nodded - it’s probably a common reaction, I suppose - and then we talked for a while and she signed an autograph for me (“pick the Bond picture,” said Dude but I ignored his advice and went for the red swimsuit one). She noticed my camera and said “Would you like a photo?” and I agreed. 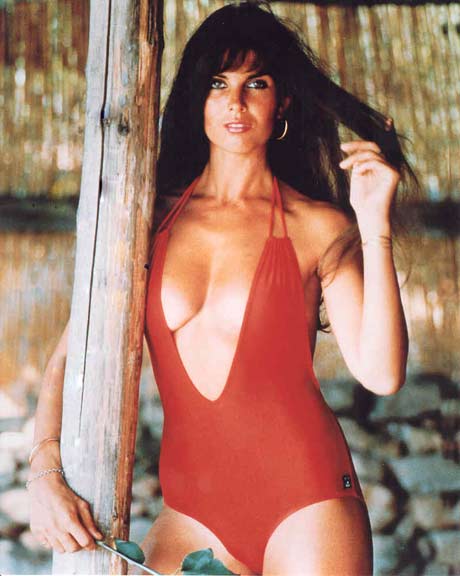 She got up from behind her table and we met at the end of it. She called Dude over and he stood between us and she put a hand on his shoulder and one around my waist. I tempted fate, put my right arm around her. The afternoon couldn’t get much better - I’d now not only met and talked with my boyhood crush, I was posing for a photo with her and my arm was around her. I was beyond happy, though in the photograph I look scared to death.

Caroline sat back down and I thanked her and shook her hand and she held out hers for Dude. He duly shook it and she told him to keep working hard at school and then we were away.

It took me several minutes for me to get my breath back and as I write this, I can still feel the terror and excitement as I stood before her. What’s nicest about the whole thing though (apart from the fact that I had no idea she’d be there) is how nice she was - she was lovely and friendly, warm and encouraging and she was genuinely interested in her conversation with Dude, which was a delight to witness.

So that was our day - both of us loved it, for mostly different reasons and when Dude suggested last night, as I put him to bed, that we go again today, I seriously considered it for a moment or two.

Yesterday, I met a hero of mine, a crush of three decades standing and she was more delightful than I could have ever imagined. And it made me think that I wish I could go back and say to the eight-year-old me, mooning over that Lambs Navy Rum poster, “One day, mate, you’ll get to meet her and please, please, please, think of something intelligent to say!” 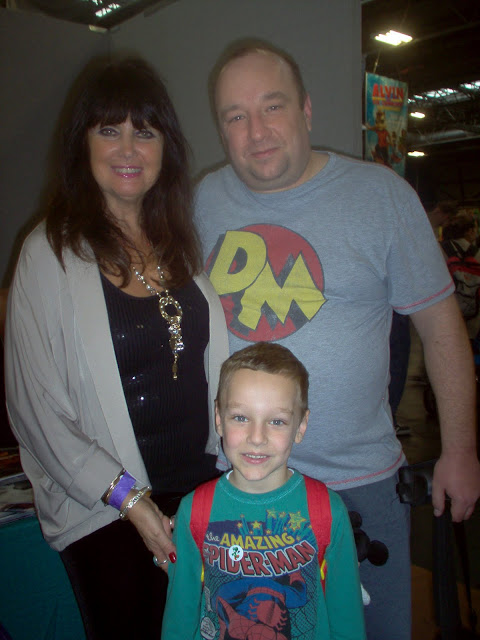