I want to read these!

Jason Morgan, over at the Peter Raft Online Resource, has posted the cover art of some more books by Mr Raft. You might recall I read “Zombie” a little while back and really enjoyed it and these latest additions seem right up my alley (more so that a couple were published by Fontana, so they should be easier to pick up).

As good as the stories sound, however, it’s the artwork that I think is fantastic and so here they are (scans courtesy of Jason Morgan): 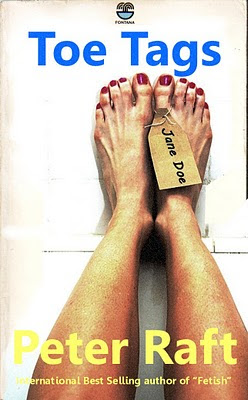 Some men like breasts, some like bums, some like full red lips. Barry Charles loves women’s feet. He likes to stroke them, to pamper them, to kiss them and to do much more. So much more. Worse, Barry doesn’t care if the woman enjoys the attention or not.

Sweeping through the London of today, finding his prey in the clubs and disco’s that glitter in the capital, Barry is looking for the perfect feet. And when he meets Stef Sukowski, an American exchange student, it appears that he’s found them. But Stef has other ideas. And she certainly doesn’t want to end up wearing…


Annie Sexton has a plan in life. Meet and marry an older man, get him to make her chief beneficiary in his will and then do her utmost to lead him to his death - athletic sex, scares, anything will do. Annie is very good, she’s just about to marry husband number three and he’s richer than the others put together. He’s also heavily into Black Magic.

On a rain-swept night, Annie tempts him to a tryst in the local cemetery and she once again becomes a young widow. But in death, her deceased husband is now more powerful than she could have ever imagined. And from that point on, with every step she takes…