Let It Snow, by Sue Moorcroft - review and Q&A

Regular readers of the blog will know Sue Moorcroft and I have been friends for a while, having met at the Kettering Writers Group in 1999 (the group leader, of a more literary bent, consigned we two genre writers to the back of the room where we had a lot of laughs).  Since then Sue's gone from strength to strength, hitting number one in the Kindle Bestseller charts (with The Christmas Promise) and also becoming a Sunday Times Best Seller in the process (with The Little Village Christmas).  With her latest (the fourth) Christmas novel, Let It Snow

now out in ebook (and appearing in paperback

on 14th November), I'm pleased to be taking part in the book's blog tour. 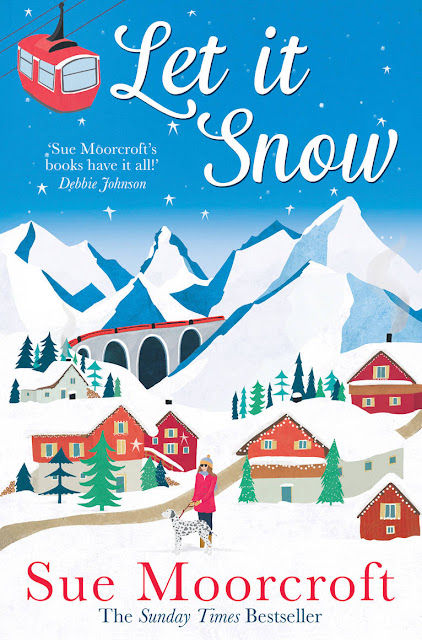 This Christmas, the villagers of Middledip are off on a very Swiss adventure…

Family means everything to Lily Cortez and her sister Zinnia, and growing up in their non-conventional family unit, they and their two mums couldn’t have been closer.

So it’s a bolt out of the blue when Lily finds her father wasn’t the anonymous one-night stand she’d always believed – and is in fact the result of her mum's reckless affair with a married man.

Confused, but determined to discover her true roots, Lily sets out to find the family she’s never known; an adventure that takes her from the frosted, thatched cottages of Middledip to the snow-capped mountains of Switzerland, via a memorable romantic encounter along the way…

Lily Cortez finds out, by accident, that her real father has just died.  Growing up with her sister Zinnia in a two-mum household, she’d assumed - and made her peace with the fact - her father was a donor but now it appears her birth-mother, Roma, had a fling which her mum Patsie, wasn’t best pleased about.  To try and establish links with her “other” family, Lily moves to (Sue's wonderful town of) Middledip to work in the pub her half-brother Tubb runs.  But when he takes a sabbatical to Switzerland, in order to recuperate from a heart attack, Lily finds herself smitten with new bar manager Isaac though, as always in a Sue Moorcroft novel, things don’t run smoothly.

I liked this a great deal - Lily is a fantastic character and her interplay with Isaac is nicely handled, as is her friendship with Carola (from The Little Village Christmas).  It’s always great fun to spend time in Middledip (and revisit a lot of characters from Sue’s previous books) and, this time, the action moves further afield as a big chunk of the novel is set in Switzerland at Christmas, when snow is all around.  The pacing is spot on, the characters and atmosphere and perfectly realised and there’s a well-maintained suspense to the will-they-won’t-they.  Highly recommended.

I decided, on one of our regular get-together's at The Trading Post, to take the opportunity to quiz Sue about the book.

MW:   Let It Snow is a great title, I love that song.  Was it enjoyable fitting the phrase into the novel?

SM:   My publishers suggested it and one other title. I chose Let it Snow because I like the song too. Until then, the favourite song of the singing group in the book, the Middletones, was White Christmas. I changed it.

MW:   Brilliant! The book features a timeline shift where some characters are in Switzerland and some in the UK.  How did you manage that?

SM:   With a giant headache, most of the time. Timelines aren’t my biggest talent so I keep an electronic timetable, which I update as I write the first draft and then again whenever changes occur in subsequent drafts or edits. As well as the characters being in two countries, I had to weave in the timetable for medical treatment of Isaac’s ex-girlfriend Hayley and also the work rota of all the staff at the pub, The Three Fishes. I also had a Google calendar with different characters showing up in different colours.

And yet … when I was on a writing retreat in Italy in the summer I received an email from Avon saying the proofreader thought she’d found an anomaly or two … OK, it was three. I was so sure I’d got it right this time I almost sent the electronic timeline and asked her to check for herself. I’m glad I didn’t because the proofreader was right twice and I was right only once.

MW:   Why did you choose to set this novel in Switzerland?

SM:   My friend and fellow author Rosemary J Kind sometimes lives in the UK and sometimes Switzerland. We were talking about her driving to Switzerland in Messenger and she said, ‘If you want to set a book there, you can come with me.’ I got straight on to my editor to see if she thought it was a good idea and, happily for me, she did! Ros and I immediately began planning the trip. I’m indebted to her because she introduced me to her Swiss friends and took me to most of the Christmassy things you find in the book as well as picking me up and driving me through England and France to Switzerland.

MW:   What was your favourite thing about Switzerland?

SM:   The beautiful parts. Lakes, mountains, architecture … everywhere you look is another gorgeous view or elegant building. Also, they really know how to do Christmas. The lights and Christmas markets were breathtaking.

MW:   Do you prefer Middledip in the summer or the winter?

SM:   Winter does make the village look like a Christmas card with frost on the cottages but I don’t mind what the season is, to be honest. I return there with a feeling of pleasure at visiting a place I know well and wondering who I’ll encounter this time. I already know my Winter 2020 book will be set between Middledip and Sweden.

SM:   Thanks very much for inviting me onto your blog, Mark, and also for joining the Let It Snow blog tour.

* * *
In other news, I was part of the team who have helped keep Rothwell Library open, following the inability of Northampton County Council to conduct themselves in a professional manner.  As we were planning out the activities, I mentioned that Sue & I had done a few library events together and one thing quickly led to another, until we came up with this... 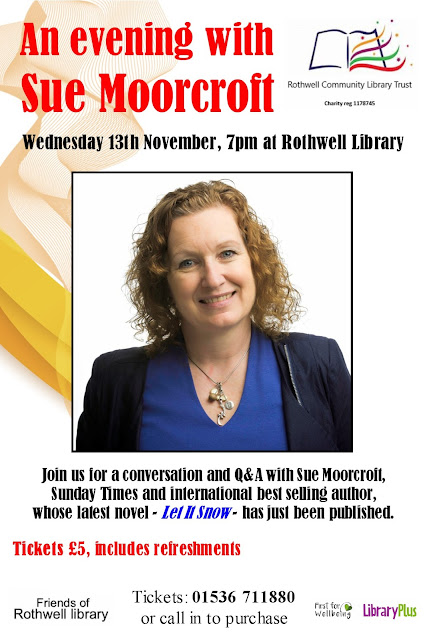 If you're local, we'd love to see you!

Sue Moorcroft is a Sunday Times and international bestselling author and has reached the coveted #1 spot on Amazon Kindle. She’s won the Readers’ Best Romantic Novel award and the Katie Fforde Bursary, and has been nominated for several other awards, including the Romantic Novel of the Year Awards.