Game Over, by Dan Whitehead (a review and reminisce)

I picked this book up on the off-chance from HMV recently, taking advantage of a price reduction because I was buying some more vinyl.  I've never been that big a gamer but, as long-time readers of the blog will know, I'm quite nostalgic for the 80s and loved the home computer revolution that began in that decade. 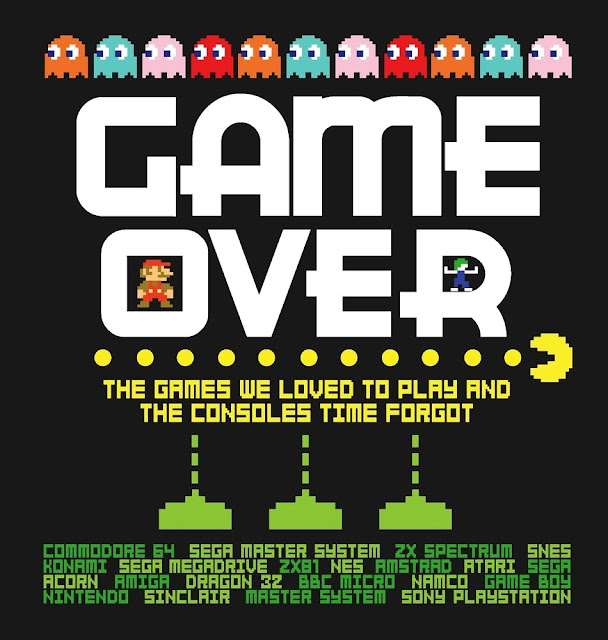 Remember the days of bad graphics, glitchy software and seemingly pointless games? What were we thinking? How did we cope?

This humorous yet fond look at gaming of old is sure to have gamers shaking their heads in wonder and chuckling at the craziness of what we had to put up with. And yet there is no denying that many of the games we played back in that golden era have helped to shape the world of gaming and brought us to where we are now.

Starting with the announcement 2018 was the 40th anniversary of “Space Invaders”, this charts computer/video gaming from its infancy in the 50s and 60s through to today, though it spends a lot of time in the boom of the 70s and 80s, which worked perfectly for me.

The format is simple, each double-page spread commenting either on a particular game, system or historic incident, with Whitehead making for a good host.  He gets across plenty of facts with a good sense of humour, so this reads almost as though you’re sitting down with a more knowledgeable mate and having a nostalgic chat about the computers of your teens.  The games are discussed broadly - though the programmers are almost always named - and the systems are put into context of what they led to, while the artwork is a mixture of screengrabs, cassette covers and production art.

Funny, occasionally enlightening (I didn’t know there were Spectrum games built around James Herbert’s The Rats or The A-Team) and always readable, for someone who came into gaming in the 80s (I had a ZX81), this was an excellent read and I would highly recommend it.

* * *
When Dude was a lot smaller, I introduced him to the joys of Donkey Kong and Frogger via simulators on the laptop and he thoroughly enjoyed them (he wasn't quite a dab hand with his Nintendo DS then), though some of that may have been down to me saying I'd played them when I was a teenager.

Back then, you see, we did think this stuff was cool because - at the time - it was cutting edge.  I remember going to Wicksteeds Park and finding they had the original Atari Star Wars game cabinet where you sat to pilot your (never seen) X-Wing down the wire-frame Death Star canyons (can you imagine that now with photo-real games?).  I loved it and, probably, contributed a significant chunk to the Wicksteeds profits for that summer.

What follows is some idea of what we had to look forward to in the early 80s.  Talking to Dude now, who has a PS4 in his bedroom and spends a lot of time watching other people play on YouTube, he can't believe life was ever this primitive.

"Oh yes," I tell him, "but back then, this was all unbelievably exciting!"


In 1983 I was part of the Rothwell Parish Church Youth club quiz team that competed in a grand Quiz Championship at the YMCA centre in Northampton with loads of other teams from the Midlands and East Anglia.  We reached the final and the last round, with everything to play for, was on films.  It was one of my specialist rounds and as the question-master cleared his throat, my team mates looked at me.  I looked at them and tried not to appear worried.  All I remember now is that the last three questions were based on E.T. and I was the only kid in the room who'd seen it.  We won the cup and I was absolutely thrilled.
I took Computer Studies as a class at school and the room had a handful of BBC Micro's for us to use and I remember them as being relatively easy to program (I passed my exam that year, having written a learning game for infants school pupils).  In 2018, David & I went to the National Video Games Museum in Nottingham with Dude (he was lured in by the Space Invaders cabinet and we didn't see him for ages) and found a machine, all hooked up and ready to program.  We spent a wonderful 15 minutes or more, typing in variations of 10 PRINT "WE WERE HERE" 20 GOTO 10.