The Making Of Raiders Of The Lost Ark, by Derek Taylor (a review)

Regular readers will know I'm always fascinated by the behind-the-scenes process of films, especially special effects work with miniatures (which I've blogged about here), matte paintings (which I've blogged about here) and making-of books.  I also love Raiders Of The Lost Ark (and wrote a retrospective piece on it, which you can read here) which, unbelievably, turns 40 this week (released on 31st July 1981 here in the UK).  So while this isn't the most up-to-date review I've ever posted, it was the perfect book for me this week. 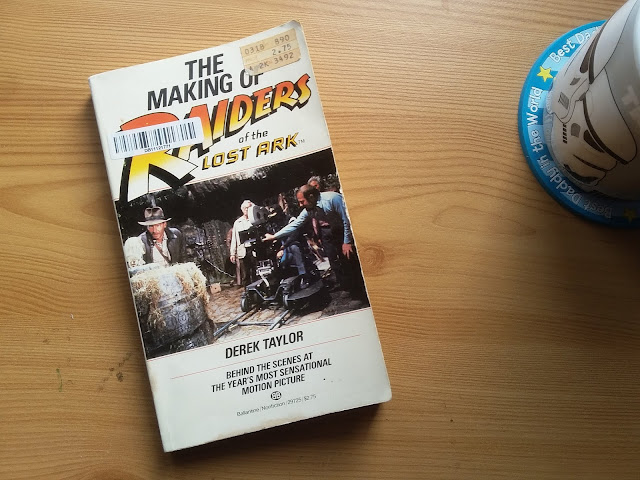 Already a fan of George Lucas and Steven Spielberg then, I went to see it that summer with my best friend Nick and loved it.  We both did, though it took him a long time to stop making fun of me because I got scared when the pretty ghost turned into a monster after the Ark had been opened.

To help celebrate the anniversary, I’ve been on a bit of a Raiders jag and one element was this making of.  First published in paperback in 1981, it includes a batch (32 pages) of “spectacular behind-the-scenes photos” (all black and white) and is a real old school making-of, the kind that’s almost as much a memoir as anything else.  It’s also the kind that doesn’t get published these days.

Derek Taylor writes well and he really is our guide, explaining the situation (in laymans terms), the script as he sees it, the troubles with the locations and the pace of the production.  As if you were sitting together as he caught you up on news, he relates chatting with various actors and crew members and they all come across as being really lovely - Harrison Ford remembers him from the Monterey pop festival, he goes for a walk with Karen Allen and Ronald Lacey befriends holidaymakers at the Tunisian hotel where the main crew and cast (but not the writer) are staying.
Taylor interviewed a lot of people and most of the twenty-three chapters (there’s also a prologue and epilogue) contain at least one with Spielberg and Lucas themselves, as unguarded in interview as I think I’ve ever read.  Chapters are devoted to interviewing (in order) Howard Kazanjian (the co-executive producer), Frank Marshall (producer), Norman Reynolds (production designer, who Spielberg is particularly enamored of due to his work on Star Wars) and Tom Smith (the make-up designer).  The stand-ins get their say and interviews continue with Robert Watts (producer), Harrison Ford, David Tomblin (assistant director, who’s a big presence in the behind-the-scenes documentaries for both this and Return Of The Jedi), Terry Leonard (stunt man), Martin Grace and Wendy Leach (the stunt doubles in England - Leach would go on to marry Vic Armstrong, who also did some of the stunts for Indy here and took over completely for the next two films), Karen Allen, Roy Charman (sound man), Kit West (special effects) and Douglas Slocombe (the director of photography).  Taylor also visited ILM (and clearly didn’t really understand any of the processes Richard Edlund talks about) and attended some of the scoring with John Williams. 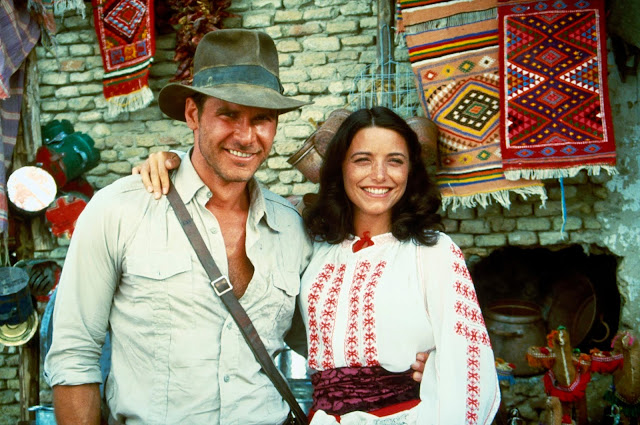 The amount of detail that comes across is impressive, some of it amusing forty years down the line.  Kit West, for example, talks about creating black smoke cheaply by buying tyres “for pennies” and setting fire to them, rather than using more expensive (but more environmentally friendly) smoke pots - different times indeed.
Hugely comprehensive and yet still chatty, this is a terrific read, faithfully following a huge crew with one aim who seemed to get on very well together and, as we know, produced a fantastic film.  If you’re used to the modern coffee-table style of making of book (which I also love, except those that feature page after page of technicians sitting in front of computer monitors), this might not be to your taste, but for a proper old-school approach, celebrating a proper, old-school action movie where pretty much everything you see actually happened, I don’t think you could do much better.  Highly recommended - the book and film (and, if you can get hold of it - as I did, to satisfy my Raiders thirst - I’d also recommend the 180g vinyl re-issue soundtrack double album).
Derek Taylor (7th May 1932 - 8th September 1997) was an English journalist, writer, publicist and record producer.  The Beatles press officer (he was sometimes called ‘the Fifth Beatle’), he also worked as a publicist for the Byrds, the Beach Boys, the Mamas and Papas, helped organise the 1967 Monterey Pop Festival and headed up publicity for Apple Corps from 1968.  After working for Warner Brothers during the 1970s he then moved to Handmade Films with his close friend George Harrison (while editing Harrison’s 1980 autobiography I, Me, Mine) and wrote several books, including the Raiders making of.  Returning to Apple Corps in the 90s, he was working on the Beatles anthology book at the time of his death.