To mark the publication of their new novel, Ragnarok Rising, I hand over the blog to a guest post from my friends Benedict Jones and Anthony Watson. 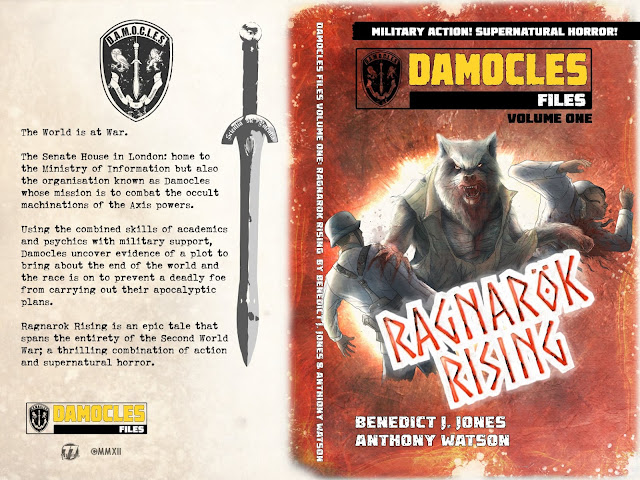 As the fires of conflict engulf the globe and empires vie for dominance, a secondary shadow war is being fought for control of the worlds occult treasures, among them the keys to the prisons of long forgotten, sleeping gods. Allied academics join forces with soldiers in a desperate race to halt the machinations of the Axis powers and shadowy cults with their own agendas.

Welcome to the world of Damocles.

BJJ: What started out as an attempt to write a joint collection of horror stories themed around the second world war quickly escalated into something bigger. Why don’t we link all the stories in some way? An overarching narrative perhaps… Well, I do have this one idea… The next thing we knew we were well on our way to 110,000 words and found ourselves building a whole world. In creating this world we knew from the off that we wanted to anchor the dark fantastic in the real history of the second world war; major events still occur when they did, units and regiments are where they were at a specific time. But, behind these real events other, darker, things are occurring.

In drawing up the characters who make up the Damocles organisation and populate the world around them we wanted to make sure that they were all too human with all the fragility which that brings. These are people plucked from the worlds of academia and the military and thrust into life or death conflicts with forces they can barely comprehend. Soldiers and scholars are dispatched to be used as cannon fodder for “the greater good”, mirroring the sacrifices made in the actual war, and we wanted to try and showcase the effects that this would have upon our protagonists. The true facts of the conflict are hidden from some of those involved, the truth being simply too terrible. Scholars, book hounds, assassins and occultists mix with bureaucrats, hobbyists, criminals and squaddies. It was important to us that their stories, with an eye to realism, were told as well as that of the epic struggle to prevent Ragnarok.

Location. Location. Location. Whether it is musty libraries in London, the streets of Istanbul, the desert wastes of north Africa, cave systems in the outer Hebrides, the barren arctic, or war-ravaged Berlin we wanted to imbue each tale with a real sense of place. This was done to try and illustrate the scope and range of the second world war. It truly was a global event that touched almost every corner of the world in one way or another.

The influences that we drew upon in developing the world of Damocles were wide ranging, drawing upon spy literature, historical sources, action and adventure pulps, Lovecraftian cosmic horror, and Norse mythology to name but a few. The Hellboy universe provided some touch points of inspiration as did various other works that involve “weird world war two”. Structure wise we aimed for a fractured narrative with characters coming into and out of the story at various points. The steampunk novel The Difference Engine helped with this in some ways, being an example of where this had been done before. Stories within stories and tales within tales. There is a heroic undercurrent to many of the stories but we tried to temper this by showing the real, often damaging, results of such heroism. One of the wonderful things about creating our world from scratch meant that we were able to draw upon a multitude of sources for influence as well as providing us with ample scope for the freedom to create and add our own inventions.

The act of writing is generally a solitary one. Writing with someone else can be a very different experience. The act of creation became a shared one in which we could both act as a sounding board for the other and in turn add our own ideas to the mix. These “idea sessions” really allowed for us to spark off each other’s creativity. It allowed us to avoid dead ends and cul-de-sacs of imagination and planning which not only allowed us to speed up the writing process but to create and develop the world around the characters very efficiently and fully. It also made it easier to overcome those writer’s block moments which can stall a work. Particularly difficult scenes for one writer could be passed to the other for completion and we utilised that at several points. The whole process has been one that was, and continues to be, thoroughly enjoyed by us both.

We produced Wings in the Darkness, an expansion on one of the shorter pieces in the novel, as an introduction and access point to the world of Damocles. The novella works well to lay out a lot of the themes and ideas which are expanded upon in the novel, Ragnarok Rising. A second novel, Volume Two, is close to completion (this time turning to the war in the Far East) and various other works set in the same world are also in development.

AW: When Ben first approached me with the idea of co-writing a collection of war/horror stories, agreeing to it was one of the easiest decisions I’d ever had to make. It’s not like we hadn’t worked together before, having already produced two volumes of our horror western novellas series Dark Frontiers so it was a real no-brainer. I set to work thinking of some ideas and had a couple lined up when Ben contacted me again and suggested that we based the stores around a secret organisation he’d thought up, there to investigate and combat occult and supernatural forces…

Cool, I thought, putting my kaiju and ghost stories back on the shelf, that’s a really good idea – and began plotting some new stories. I think we ‘d finished a story each when he came up with the “Let’s make this a novel with an overarching narrative” idea. Thus the Damocles Files were born.

I have to say, I’ve never enjoyed writing something as much as I have The Damocles Files. Once we had the main narrative in place, we could tailor the new stories to fit and retrofit the ones we’d already completed. On the whole, we would write individual stories on our own but one of the stories in the book is a collaboration, as is the novella Last Rites which makes up the novel’s conclusion. It’ll be interesting to see whether readers can tell which of us wrote which story – and whether they can tell which was the co-written one.

Part of the joy of writing these stories was spending time with the characters we’d created. I think Ben is a master at this particular art but it’s something I’m not always that confident about so it was good to be able to take his creations and use them in the stories I was working on. It’s no real spoiler to say that not all of them survive until the end credits and it was actually quite emotional writing the scenes where they meet their fates. Of course, a huge benefit of writing the novel as a fractured narrative spanning many years is that there are big gaps between the stories, gaps which are there to be filled, so characters who might not have made it to the end of Volume One can always be resurrected – which is precisely what we’re doing in Volume Two, and all the standalone stories and novellas we have planned.

Whilst the novel is grounded in reality and historical fact, a huge influence on it personally were the war films I watched as a kid (and continue to watch and enjoy, it has to be said). I’ve a huge affection for those films and the unironic way they portrayed the heroism and valour of their heroes. I’d like to think that that gung-ho spirit is reflected in The Damocles Files; there’s certainly plenty of unapologetic heroic sacrifice and bravery above and beyond the call of duty featured within its pages. It’s a love letter to those films of my youth.

I had a great time writing this book and will be forever grateful to Ben for inviting me along for the ride. I hope everyone gets as much enjoyment from reading it as I had in writing it.

Wings in the Darkness was released on Kindle on the 21st May 2021 and can be purchased here.
The Damocles Files Volume 1: Raganarok Rising is being released in paperback and ebook on
23rd July 2021 and the Kindle edition can be pre-ordered here.
Posted by Mark West at 09:00:00