Twenty years ago this month saw my first horror short story in print when Back Above The Clouds appeared in The Dream Zone 4 - I was over the moon about it. 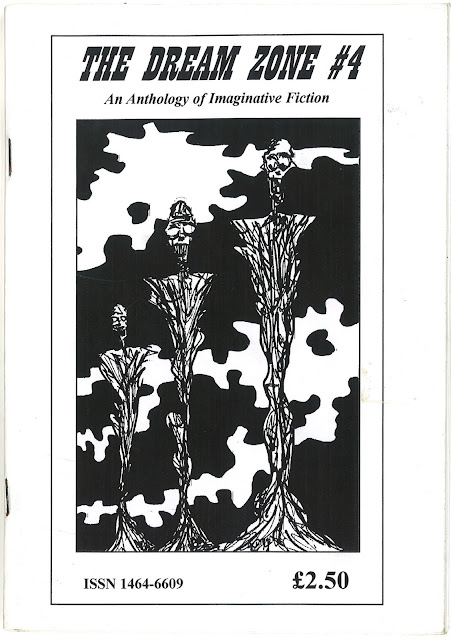 Since discovering the small press in late 1998, I’d shifted back into writing horror which I hadn’t done since my teens (and wrote specifically to submit, rather than just because I fancied doing it).  My first acceptance came in February 1999 (As Quiet As It Gets, which appeared in Sci-Fright 6 in February 2000), while my first published story was 27:32 in Enigmatic Electronic, the then newfangled online presence of the superb Enigmatic Tales (edited and operated by Mick & Len, 'the ghost story men’ - Messrs. Sims & Maynard, excellent writers and editors who opened the door for quite a few of us).  Back Above The Clouds, though, beat them all to the punch.

The story, my third acceptance, came to me as I was lying in bed.  The Dream Zone editor, Paul Bradshaw, had recently rejected my story Sleep Deeply and I was trying to come up with a new idea when I had an image of hundreds of people floating in a dome (it was actually the Cine-2000 - which has long-since disappeared - at Wicksteeds Park).  That image, the magic of being able to fly, linked with my day-dreaming during a particularly boring meeting that afternoon and the story pretty much rolled out on its own.  According to my notes, I had the idea on Tuesday night, wrote it on Wednesday, revised it on Thursday and had it accepted (by post) the following Tuesday.

And here's the appearance...
The Dream Zone, stapled, features some names in the issue who, I’m pleased to say, are still involved with writing today. 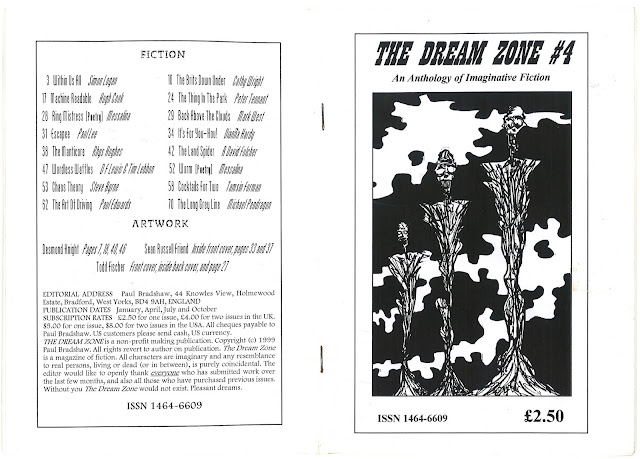 Simon Logan, Paul Edwards and Rhys Hughes are still publishing, DF Lewis and Peter Tennant concentrate more on reviewing now (the latter highly regarded for his work on Black Static), while Tim Lebbon is doing really rather nicely for himself.  My fine friend and fellow Crusty, Steve Byrne, is also still publishing and I've reviewed his novels Phoenix and Craze on the blog. 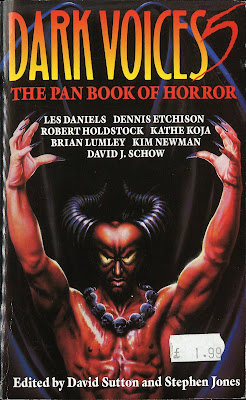 I came to the small press, initially, through David Sutton & Stephen Jones’ Dark Voices 5 which I picked up in late 1998.  Thrilled to discover people were still publishing short horror fiction, I bought the latest Best New Horror and used the 'useful addresses' at the back of that, from which I discovered The Third Alternative (the original version of Black Static) and its sister publication Zene.  Zene was a listings magazine, a treasure trove of small presses, magazines and anthologies filled with markets, guidelines and addresses for me to explore and I did so with relish.

As it turns out, I was lucky enough to just get in to what turned out to be the final golden days of the small press during the print zine phase, a glorious time of desktop publishing where hardy editors and publishers put together some terrific physical magazines.  Often featuring vivid artwork, the editions were sometimes perfect bound, sometimes stapled, but always great fun to read and I subscribed to as many as I could find (and submitted to most too).  The end was already in sight though as e-zines were starting to appear and if you weren’t around then, imagine black backgrounds, white or red writing, loads of animated gifs (dripping blood and spinning skulls and the like) and you’re pretty much there.

That first year of my being published I appeared in five publications.  As well as those titles mentioned above, Infantophobia appeared in the superb Sackcloth & Ashes (edited by Andrew & Lisa Busby, very nice people who also set up the first Con I ever went to, in Wigan, where I first met Paul Finch), All The Rage was in Unhinged, edited by Paul Lockey and the black comedy Thank You For The Music appeared in Planet Prozak, edited by Stephen Bennion. As Quiet As It Gets, that first acceptance, was in Sci-Fright, edited by Sian Ross-Martin.

27:32, Back Above The Clouds, Thank You For The Music and As Quiet As It Gets have never been re-published