In September 1983 - thirty years ago - INXS went into the Power Station recording studio in New York and recorded ‘Original Sin’ with Nile Rodgers producing and Daryl Hall singing backing vocals.  It was written by Andrew Farriss & Michael Hutchence and appeared on the 1984 album “The Swing” 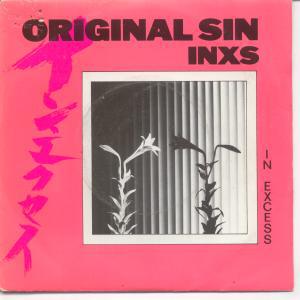 Released in December 1983 in America and early 1984 for the rest of the world, ‘Original Sin’ became their first No. 1 single in Australia - it was also No. 1 in Argentina and France, No. 6 in New Zealand, No. 11 in Canada and No. 58 in the U.S.  The song was largely ignored here in the UK, a state that wouldn’t alter much until ‘Listen Like Thieves’ came along the next year.

As it was, the song marked a change in the bands development.  Already well established as a live act and building constantly on that reputation, their albums were starting to capture that sound.  “The Swing” - ‘Original Sin’ aside - was produced by Nick Launay (who is, incidentally, the son of Andrew Laurance, who wrote pulpy horror thrillers in the 70s and 80s) and also featured stand-out tracks (and concert staples for years to come) such as ‘I Send A Message’, ‘Love Is (What I Say)’, ‘Burn For You’ and ‘All The Voices’.  The latter was from the soundtrack of “Strikebound”, a film by Richard Lowenstein who started his association with the band by making the video for ‘Burn For You’ and would later make the award-winning feature film "Dogs In Space" with Hutchence.  The team of INXS and Lowenstein would go on to produce several ground-breaking videos for the next two albums, perfectly synching them to the nascent MTV and earning them a place in 80s musical history.

“The Swing” was followed by “Listen Like Thieves” (1985, produced by Chris Thomas), which really made their name and then the mighty “KICK” (1987, also produced by Thomas) which confirmed them - for the late 80s at least - as one of the biggest bands in the world.

The original video, shot in Japan at the same time as ‘I Send A Message’, was directed by Yasuhiko Yamamoto.

This performance was shot at Summer XS, Wembley Stadium, 13th July 1991 - a concert I was lucky enough to attend - and later released on the "Live Baby Live" DVD, directed by David Mallet.