To mark the forthcoming publication of her latest novel, Summer on a Sunny Island, here's a guest post from my fine friend Sue Moorcroft. 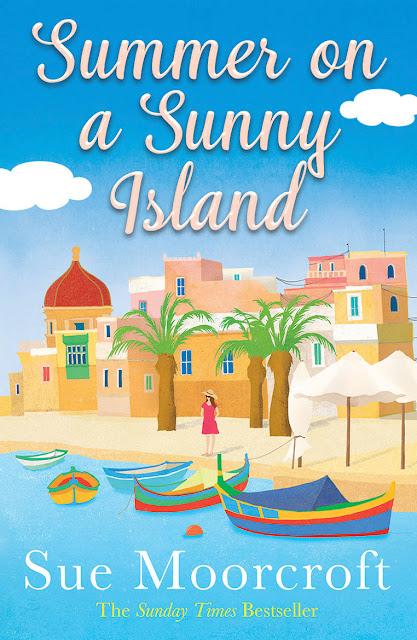 In Summer on a Sunny Island, to be published on 30 April 2020, several of the characters stand at crossroads in their lives. From a writing point of view it provides conflict and personal goals, both of which drive the narrative. One afternoon, Rosa and Zach sit up on the roof terrace and try to coach each other into deciding what it is they want next in their lives. It’s not a spectacularly successful coaching session because although they agree they should be looking forward they look back. They wonder whether they should change and, if so, how?

A few years ago I felt at a crossroads too. I wasn’t on a Maltese roof terrace gazing out at the blue Mediterranean and drinking beer with a friend so I coached myself. It had a profound effect on my career as an author.

I’d published about nine novels and a raft of short stories, serials, courses and columns; I was a creative writing tutor and judged writing competitions. It was what’s politely referred to as ‘a portfolio career’. Translation: I would take on most paid tasks if they were connected with writing and some that were unpaid if they might prove useful to my career. This situation had come about after my husband’s career hit a bump in the road and I either had to become more fee aware or get a day job. (I often refer to this as ‘a proper job’. I shouldn’t. Writing is a proper job.)

I wasn’t in a happy place personally and felt over-stressed and underpaid. You could term it a crisis of the spirit or a pity party. Whatever, I assessed everything writing-connected under three headings, each subdivided into good or bad.

I can’t remember all the items I analysed but two things went into all three right-hand columns: being a committee member and vice chair of a writing organisation and writing a column for a Formula 1 online magazine. I was shocked to see the former in all the wrong columns but it was true that an organisation that has brought me a lot of joy and helped me professionally was also sucking up hundreds of hours each year. There was also discord, which brought anxiety. I emailed the chair, who’s one of my best friends, and said, ‘I don’t think I can be vice chair any more.’ To her huge credit, she supported my decision and had me replaced without one word of reproach, though she could easily have felt immensely let down. After that, it was comparatively easy to email the e-zine and gracefully retire from their writing staff.

I felt tonnes lighter when these two items were out of the way. I could read what I chose instead of reading writing that needed appraising for awards! I could watch Formula 1 races without making notes or worrying about the angle my column would take! I think my son encapsulated the situation perfectly when he said, ‘You took two of your greatest pleasures and made them into jobs.’

Spurred by this success I began to cut things that appeared in two of the right-hand columns. They earned me some money but not that much: appraising manuscripts and the least remunerative of my work with creative writing students. The students never made me personally unhappy but the constant flow of work that piled up if I were ill or on holiday did definitely cheese me off. Worse, it kept me from writing my own stuff and the workflow was not within my control. I also began to refuse invitations to judge writing competitions, especially when a writing group ‘forgot’ to pay me a fee that was only ever nominal, even after three polite reminders. These measures gave me significant time for my own writing without losing me much money.

Feeling a lot better, I looked at the other side of the coin. I now knew what I didn’t want - so what was it that I did want?

It was a question I found easier to answer than either Rosa or Zach did. It hadn’t really changed since the early nineties when I began to try and get published.

I wanted to earn a living from writing novels.

How could I achieve it? I needed a publisher who would get right behind me and also get my books into supermarkets.

I thought the best route there was to get a great agent, one who would love my books and be ambitious for me. And, guess what? It worked!

I emailed the late Carole Blake of Blake Friedmann. I knew her slightly from writing conferences and social media. The email began, ‘I know you’re not taking anybody on but I’m going to ask you anyway.’ The short version of what happened next was that I was right - she wasn’t taking anybody on. But, happily for me, she showed my work to the wonderful Juliet Pickering at the same agency and she wanted to talk to me. We met, got on, shared visions … she was enthusiastic about my books. We began working together.

The rest, as annoying people say, is history. My self-coaching didn’t end as Rosa’s and Zach’s did, in a hot clinch interrupted by her ex-boyfriend FaceTiming her, but the results were - and still are - pretty exciting.

You can read the second part, "What Happened Next", here