If You Go Down To The Woods, by Seth C. Adams (a review)

In a new edition of the occasional series, I want to tell you about a book I've read and loved, which I think adds to the genre (both thriller and coming-of-age, in this case) and that I think you'll enjoy if you're a fan. 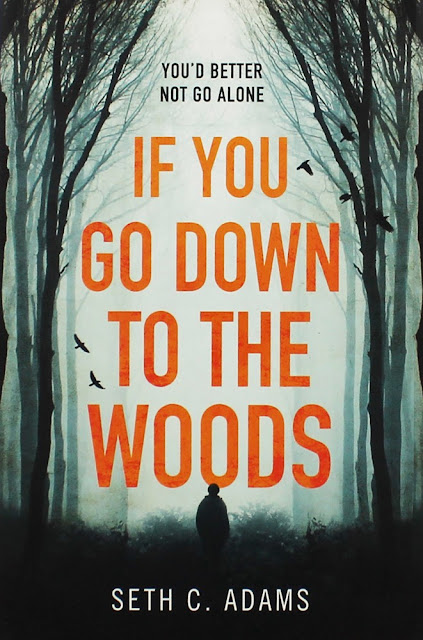 We were so young when it all happened. Just 13-years-old, making the most of the long, hot, lazy days of summer, thinking we had the world at our feet. That was us me, Fat Bobby, Jim and Tara the four members of the Outsiders’ Club.

The day we found a burnt-out car in the woods was the day everything changed. Cold, hard cash in the front seat and a body in the trunk it started out as a mystery we were desperate to solve.

Then, the Collector arrived. He knew we had found his secret. And suddenly, our summer of innocence turned into the stuff of nightmares.

Nothing would ever be the same again

Joey is 13 and, with his sister Sarah, parents and dog Bandit, has just moved from California to Payne, a small Arizona town.  Out exploring the nearby woods, he helps a kid his age - Fat Bobby - escape from some bullies and then meets Tara, who quickly becomes the girl of his dreams, at the Barnes & Noble bookshop his dad manages.  He's soon friends with both, as well as the local scrapyard owners son Jim and the four form The Outsiders Club as the school summer holidays stretch out before them.  While exploring the woods further, they discover an abandoned car and, fired with curiosity, open the doors and boot discovering not only a great deal of money but also a dead body.  This grim discovery brings them into contact with The Collector (“I collect things that are owed and at times I collect things for myself”), crooked police officers and gangsters as the kids try to do the right thing before their families are harmed.

I actually read this late last year - I picked it up, by chance, on a Christmas shopping trip to Leicester with Dude in early December.  Unusually for me, I decided to start it straight away and it slotted comfortably into my Top 10 Reads of the year (which you can find here).

As a big fan of coming-of-age stories, I thoroughly enjoyed this, which reads like a Stephen King novel without a hint of the supernatural (and has lovely echoes with Boys Life, my all-time favourite novel).  Taking place in the past (I’d assumed the 80s but from certain references - Die Hard on VHS and using the internet - it has to be the 90s, though thankfully no-one has a smartphone) and perfectly capturing the manner of 13-year-olds (I’m the father of one, it was pitch perfect), it deals well with friendship, love (friends, parents, aggravating older sisters) and death.  Payne is nicely realised, a perfect little town that is less so once you peek below the surface and all the characters leap off the page, especially the ones which exhibit a nasty streak.  The woods, which play a key part in several set pieces, are alive and you can almost feel yourself in them.  Adams sets a good pace from the off, which he maintains throughout and as things take several turns for the worse and the tension ratchets up, I found myself tearing through the pages, deeply concerned for Joey and his gang.  With a perfectly bittersweet coda, this is a cracking novel and I would very highly recommend it.