The Bones Of You, by Gary McMahon

In a new edition of the occasional series, I want to tell you about a book that I've read and loved, which I think adds to the horror genre and that I think you'll enjoy if you're a fan.  Gary McMahon and I go back a good way, it was he who pulled me out of my writers block (and dragged "The Mill" out of me too) and I will forever be grateful for that.

In addition to being a good bloke though, he's a bloody good writer too and at least one of his novels (yes, he's prolific) appears in my Top 10 Reads of the year, year in and year out.  That's not favoritism, that's the respect due from a horror fan to a horror writer who constantly delivers and always pushes himself.

"The Bones Of You" is a short novel that is being released at Halloween by Earthling Publications.  It's good, very good and is already in my Top 5 Reads of the year. 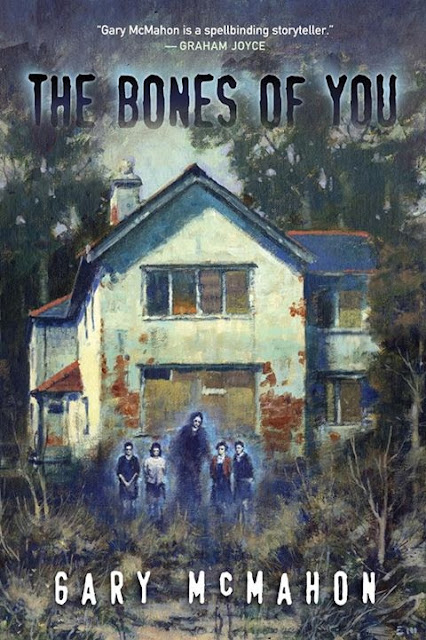 I love you…I love the bones of you.

Adam Morris moves into a cheap rental property in the suburbs. He’s divorced and now only sees his daughter, Jessica, every other weekend. He’s a broken man trying to start a new life. When strange events start to occur in the run-up to Halloween, Adam suspects there’s a link to the old, abandoned house next door. Soon he learns about a dead killer named Katherine Moffat and the terrible things she did to her victims in the cellar.

As Adam uncovers more details regarding past events in the house next door, he realizes that he and Jessica might be in real danger. Before long, he is caught up in a mortal struggle to prevent the lingering influence of “Little Miss Moffat”’ from destroying everything he has tried so hard to protect.

This is a story about ghosts, a dead serial killer, and a man struggling to be a good father to his young daughter. There’s pain and pathos, love and hate, abuse, addiction and desire.

It’s also the story of Little Miss Moffat and the Radiant Children….


More details are here, at the Earthling Publications site and this is sure to sell out so get in quick.

Honestly, you won't regret it...