The memorial was a key part of the book and when I was given the go-ahead to create interior illustrations, I knew I wanted to show it too.  The problem was, I’d made it up and - as far as I knew - nothing that looked like it existed in real life.

I whittled about it for a while and then had a Eureka! moment.  My Dad is an accomplished model-maker and when I asked him if he could help me out, he jumped at the chance. In fact, he said “let the art department worry about it” and that was it. He asked for a rough drawing (which I gave him, at the same time realising that I didn’t properly know how it should look) and he made it over the course of the week.

I was so impressed with it - still am, in fact, it takes pride of place on my bookcase - that the memorial in the text changed, to accommodate what Dad built for me.

This is the final composite image – much larger than it would normally be seen, as an element on a postcard. 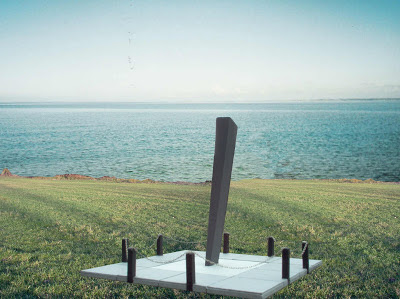 This is not the original memorial photograph (which, due to not saving it as a different file name, I destroyed with the editing process), but it’s a test photo taken at the same time.  I shot it in our then back garden, to utilise natural light (a trick I learned from reading behind the scenes books on Industrial Light & Magic!).  You can get a sense of the scale from my hand and the chain-link around the small pillars is an old necklace of my Mum’s. 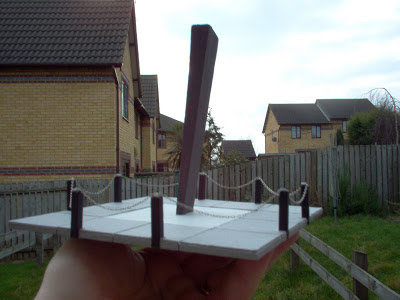 The grass comes from this photograph I took at Wicksteeds park, looking towards the lake from behind the rollercoaster compound. I had to dupe the picture, to make enough ground for the model to “fit”, which is why you see those same sets of shadows. I took the bush line, at the lake, as the natural line to cut the picture. 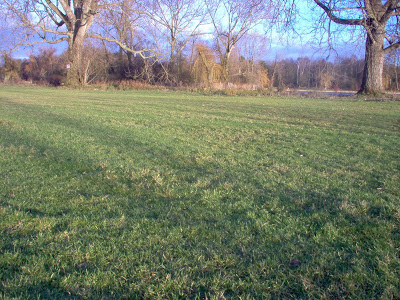 The sea comes from this picture of me, exploring some rocks near to Caernarvon in Wales. I erased myself (which is why there is a some blurring on the final shot) down to my waist and put the bush line from the grass picture over that part.

Conjure was re-published in both print and digital editions by Greyhart Press and more details can be found at the dedicated page here.
Posted by Mark West at 09:30:00