Another of my top-tip reads (though, since this is by Stephen King, most of the readers of this blog will probably have either decided they're going to read it or will already be in the process of doing so).

However, on the off-chance that you haven't, here's my review of a book that is currently my top read of the year. 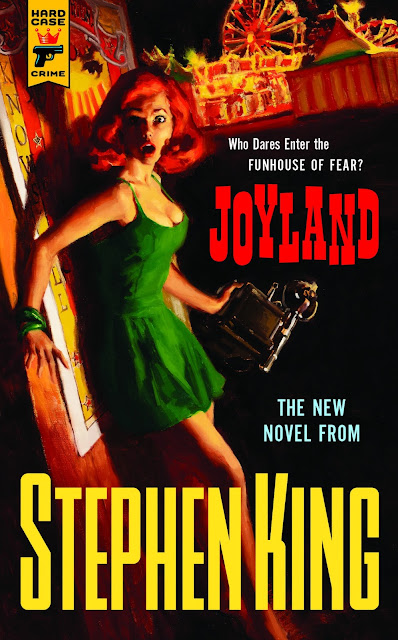 
All I can say is what you already know: some days are treasure.

It’s 1973 and Devin Jones is a 21-year-old college student, recently dumped by his long-term girlfriend (though still a virgin) and looking forward to working his summer vacation at the Joyland amusement park in North Carolina.  Over the summer and into the Autumn, he’ll meet new friends, a boy with a psychic gift and encounter the ghost of a murdered girl.

Told as a reminiscence by Devin in 2013 (“I’m in my sixties now, I’m a prostate cancer survivor, but I still want to know why I wasn’t good enough for Wendy Keegan”), this is what I would consider as prime King (and it’s the first book of his I’ve read in almost ten years).  It does take its time to get going (and the structure isn’t immediately clear) but as you read you quickly realise the pace works perfectly - we get to know his friends, the park and its people and history, the owner of the guesthouse, the area and the times (music plays a key part in that, but there’re plenty of pop culture references and there’s a lovely in-joke in the name of a travelling circus).  The characterisation is spot on and so deftly done you feel you know these people almost immediately.  From Devin, who we desperately want to see succeed (and shake off the thoughts of Wendy), to Erin Cook (Hollywood Girl) and Tom Kennedy, fellow summer workers who become a couple and life-long friends of Jones (though we later find out sad news about Tom), there’s never a false moment for any of them.  The secondary characters are just as well-drawn, springing to life with verve, like Emmalina Shoplaw who runs the guesthouse, Mr Easterbrook, the owner of Joyland, who dresses like a mortician and insists that the workers of Joyland are “here to sell fun” and Devin’s Dad, a quiet, widowed, purposeful man.  The park team - from Fred Dean, whose transformation from manager to worker is as much a surprise to us as it is for Devin to Lane Hardy, all tight-jeans and jaunty hat and rhyming couplets; from Eddie Parks a mean man who Devin saves and who maybe returns the favour, to Madame Fortuna, a Brooklyn native who channels Bela Lugosi to deliver her psychic readings.  It is she who tells Devin that he will meet a boy with a dog.

That leads us to Annie Ross and her son Michael, who has the gift of second-sight but is stricken with muscular dystrophy.  They live in a big house off the beach and whilst she doesn’t acknowledge Devin as he walks by on the way to work, the boy does.  When Devin helps him to fly his kite one day, they become friends and the gradual thawing of Annie to him is what gives this novel its heart - we come to understand why she is the way she is, we understand and empathise with the pain she feels watching her son die and we want to hold and comfort her as much as Devin does.  Their relationship, from that first meeting to the final page, is beautifully observed and as heart-warming as it is amusing.

The selling point (but not the real point) of the story - “Who dares enter the funhouse of fear?” - revolves around the fact that a young woman called Linda Gray was murdered in the Horror House ride (which Eddie Parks runs).  Madame Fortuna won’t enter it and Tom sees something in there that scares him, but Devin is intrigued and with help from Erin, he solves the crime and finally flushes out the “Carny Killer”.  I liked that angle, I enjoyed the detective part of it (though you’d be hard pressed to call it a crime novel), but that’s not what the book was about.  To me, “Joyland” is about the power of love and friendship (as a lot of King fiction is), it’s about the amusement park and a way of life that no longer really exists (and carny-speak, The Talk, is used a lot, shorthand such as ‘ride-jockeys’ for the operators, ‘rubes’ for punters and ‘points’ for pretty girls).  It’s about joy (Devin dresses up as Howie the Happy Hound, a role that other ‘greenies’ hate but he loves because of how the kids react to him) and the fun and simplicity of childhood but it’s also about loss (Wendy, Devin’s mum) and the way life often doesn’t go the way we want it to.  Stephen King, for me, is often at his best when dealing with nostalgia (“The Body” being absolutely key to that theory), telling a story that on the surface might be horror or mystery or crime when in fact it’s actually about coming of age and charting a rites of passage that speaks to most of us.

“Joyland” is a beautiful book, a well paced and gripping read, full of humanity and light and darkness and topped with an ending that made me cry.  If you only know Stephen King as a horror writer then you would be doing yourself a favour to discover this loving nod to life, to growing up and falling in love and, yes, to getting older.  I cannot recommend this book highly enough. 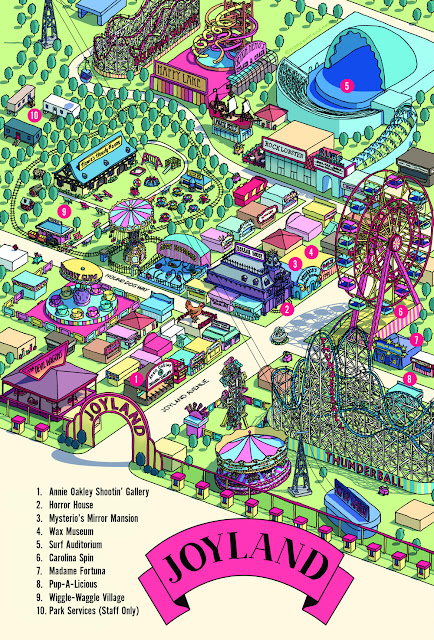 a map of Joyland, created for the hardback edition by Susan Hunt Yule 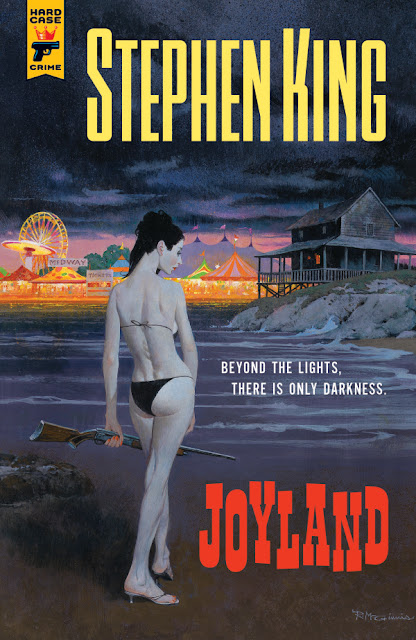 The hardback cover.  I'm a big fan of Robert McGinnis and whilst this perfectly serves the pulpy tradition of crime novels, it does include a bit of a spoiler.
Posted by Mark West at 13:31:00