Regular readers of the blog will know I'm a big fan of The Three Investigators series (I wrote a Nostalgic post about them, on the 50th anniversary in 2014, which you can read here) and am an avid collector of the various editions.

Since they were published over a long period of time, the books appeared in different formats.  Format a, which was printed between 1970 and 1979, coincided with me becoming a fan but format b (printed between 1980 and 1985) were the editions in print when I started collecting and so, for various reasons, remain my favourite.  In all cases, the wonderful artwork was by Peter Archer and I thought it would be a perfect subject for my occasional Ten Favourite Covers thread.

I hope, if you were a fellow fan, you see a favourite of your own here too…

In December 2014, to help celebrate the 50th anniversary, I blogged my All Time Top 10 (which you can read here).

Peter Archer was born in 1933 and in 1962 became part of the Collins pool of freelance and staff illustrators handling covers and internal artwork for their hardback and paperback books.  He worked on the Hardy Boys, Nancy Drew, Three Investigators and Lone Pine Adventures, amongst many others and also contributed to Armada’s ‘Ghost Book’ series.

Primarily known later as one of the UK’s finest military painters, over the course of 40 years he was commissioned by many regiments and his work covered most major conflicts from Clive, East India Company 1757, right up to Afghanistan 2014, according to his official website.

Peter Archer passed away on 24th January 2018.  He’d been suffering with lung cancer.

My friend, Ian Regan (an enthusiastic and knowledgeable Three Investigator fan who, in addition to many other things, maintains the wonderful Cover Art Archive) was lucky enough to meet Mr Archer in 2017 and reported he was a very nice man who “found it extremely gratifying to discover that his work on children's books was still loved and adored all over the globe, almost forty years since that particular phase of his career ended. In his own words: "This is such fun!"”  Even better, Ian managed to get me Mr Archer’s autograph, in a copy of my favourite Three Investigators book. 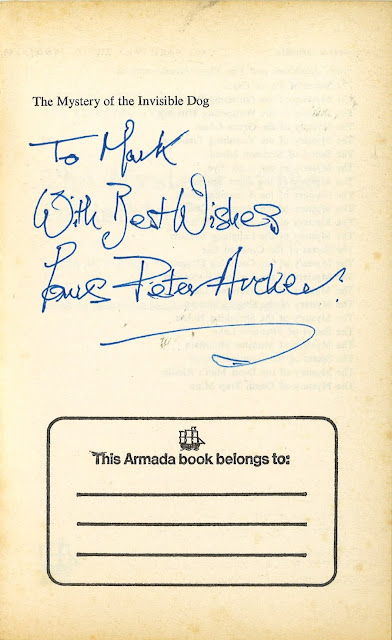