I'm pleased to announce that The Woods, the latest PentAnth anthology from Hersham Horror Books, edited by Phil Sloman, is being launched at Edge-Lit this coming weekend.  Among a cracking selection of writers, it contains my short story Compass Wood, a dark tale of a man who takes a shortcut, has someone flag him down on a lonely country road and then gets chased into the titular wood. 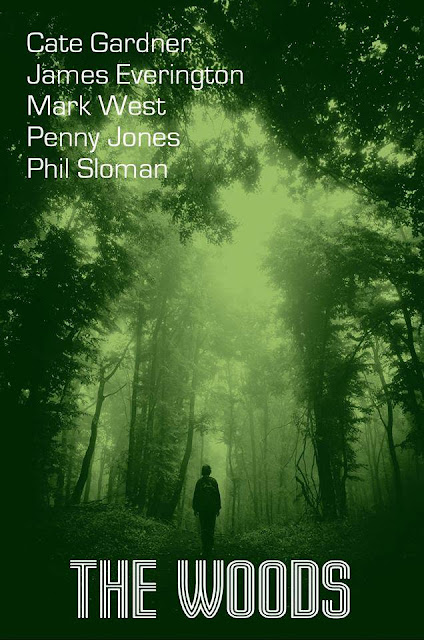 A Short Walk Round The Woods - James Everington


Just as I came to the end of a draft for the thriller novel I'm working on, Phil asked me to be involved in the latest PentAnth anthology and I immediately said yes.  I like Phil, I've worked a lot with Peter Mark May and HHB in the past and I relished the chance to create something new and, more importantly, short.

I decided to use the concept of the anthology as a key location, since I’ve written a few stories set in and around woods - a big set piece in the thriller takes place there too - and know they can be creepy and unnerving places after dark.  I instantly had two real-life locations to base my fake wood on - an old quarry area in Rothwell called The Folly and a small wood between Kettering and Corby - and once I had them fixed, most of the story came together quickly.  I talked through some ideas with my friend David, went for a walk in the real places to soak up atmosphere (which is where the bramble did, indeed, snag on my laces) and started writing.  The ending was always fixed in place but some of the bits that happen along the way were, quite literally, happy (for me, if not the characters) accidents.

As with the other HHB PentAnth editions (such as the one I edited, Anatomy Of Death), I designed the cover.

The man came out of nowhere.
One moment, the narrow road curving its way through Compass Wood appeared empty, the next the man was lurching towards the car.
Reacting quickly, Jason braked and steered onto the grassy verge. Stones and debris battered the underside of the car as the man, tall and wide-eyed, hair askew, turned to follow its progress. Jason drove back onto the tarmac and the brakes caught, the car coming to a juddering halt.
Jason blew out a breath, heart jack-hammering against his sternum. Nerves tingled up his arms and a horrible cold sweat pasted across his forehead.
“Fucking idiot,” he said and looked in the rear view mirror.
The man came towards the car, arms waving above his head like some lunatic capering under the full moon. Although he wore a long overcoat and what appeared to be a shirt and tie, there was something in his expresson - no, in his eyes - Jason didn’t like.
He put the car in gear and drove off. The man capered on, until the road curved and took him out of sight.