A Summer To Remember, by Sue Moorcroft

Regular readers of the blog will know Sue Moorcroft and I have been friends for a while, having met at the Kettering Writers Group in 1999 (the group leader was of a more literary bent, so we genre writers were consigned to the back of the room, where we had great fun).  Since then she's gone from strength to strength, hitting number one in the Kindle Bestseller charts (with The Christmas Promise) while also becoming a Sunday Times Best Seller in the process and I've featured her a lot on blog (to see more, click this link).  I'm also pleased to be one of her beta-readers and her latest novel, A Summer To Remember, has jumped straight into my all-time top 5 favourites of her work. 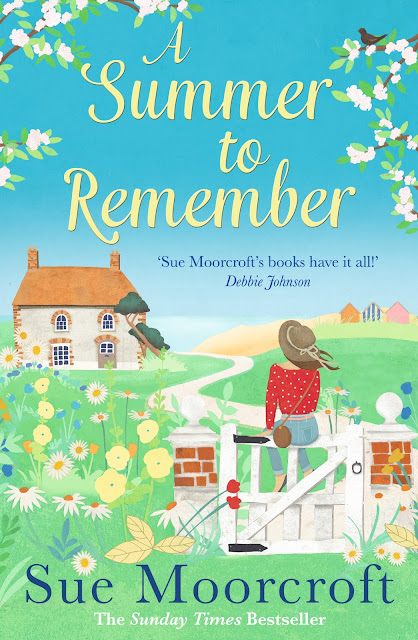 As part of the blog tour, I have an extract from the novel to share with you and I'll also include my review.  In addition, I picked Sue's brains, at one our Trading Post meet-ups, for a Q&A session about the book.


COME AND SPEND SUMMER BY THE SEA!
WANTED! A caretaker for Roundhouse Row holiday cottages.

WHERE? Nelson’s Bar is the perfect little village. Nestled away on the Norfolk coast we can offer you no signal, no Wi-Fi and – most importantly – no problems!

WHO? The ideal candidate will be looking for an escape from their cheating scumbag ex-fiancé, a diversion from their entitled cousin, and a break from their traitorous friends.

WHAT YOU’LL GET! Accommodation in a chocolate-box cottage, plus a summer filled with blue skies and beachside walks. Oh, and a reunion with the man of your dreams.

PLEASE NOTE: We take no responsibility for any of the above scumbags, passengers and/or traitors walking back into your life…

GET IN TOUCH NOW TO MAKE THIS A SUMMER TO REMEMBER!


For the past six years, since Alice had jilted Lee and Aaron had bought Lee out of the property, she’d looked after Alice’s half of Roundhouse Row with a tiny fragment of her capabilities. A part-time caretaking job would be a breeze; a summer in Norfolk would help her heal. She’d wilfully ignored Aaron’s astounded reply: TOMORROW??? What about references??? Or me being able to chat with this person? And, later, Clancy! Please reply! She’d put her phone on ‘do not disturb’ in case he broke the tacit agreement of only communicating via email, and rang.

And that’s how she’d ended up sitting amongst boxes last night, packing recklessly for a low-effort life change and a place to lick her wounds. She’d been able to look into Will’s mortified face and say with manufactured indifference, ‘I have somewhere to go. You needn’t worry.’ She’d handed him the white leather file emblazoned with September Wedding in silver. ‘You’ll find everything in here that you need to cancel our wedding. It’s only fair that you take responsibility as you’re the one to find someone new.’ Then she’d completed her packing with the images of wedding dresses and morning suits swimming in the tears in her eyes, remembering, now she was about to return to Nelson’s Bar, Alice’s wedding day.

Clancy was getting an agonising taste of what Lee must have felt. Surely Alice couldn’t truly have imagined Lee’s pain at being left at the altar like that? Or she would have arranged some gentler way of withdrawing from the marriage.

Now, with Lee’s brother Aaron looking on, she swal¬lowed convulsively against empty-stomach nausea. The fluttering in her ears grew louder and cold sweat gathered on her face. Ever the pragmatist, she murmured, ‘I think I should sit down.’

And she did. The room rushed past her and the floor flew up to hit her, hard.

She heard Aaron exclaim, then a warm hand guided her head down towards her knees and his voice seemed to come from far away. ‘Are you ill?’

Politely, she replied, ‘I’m OK. I just missed breakfast.’ Cautiously, she eased away from him and lifted her head. The room only spun slightly. And that might have been because she’d been suddenly engulfed in the memory of the last time Aaron had touched her. It hadn’t occurred to her that he’d still affect her.

There’s so much to like about this novel and I did, it was a superb read.  Clancy, her heroine, is a terrific character who’s sexy and smart, damaged but strong and she grabs you by the hand and runs you through the story.  Everything she does is realistic and feels right so we fully identify with her situation and all the bad stuff that befalls her.  Aaron, her romantic foil, is well drawn, hunky, down-to-earth and a real countryboy to Clancy’s metropolitan lady, adding a nice will-they/won’t-they (end up together because of their differences) to the course of their romance.  Sue’s graceful writing throws up some particularly unpalatable characters, two of which I actively despised, as well as the usual cast of quirky locals.  This time around the story is set in Nelson’s Bar, a little bit of headland near Hunstanton and it’s so well described you could almost see the houses and feel the salt in the air.  With a nice sub-plot sympathetically dealing with a gay relationship in a small community, a one-eyed dog and a loving older couple who can no longer live together (their choice), this is a cracking read, full of tension, romance and humour, told with great pace and I absolutely loved it.  Very highly recommended.

MW:   Where did the idea come from? Clancy is another in your line of strong, if slightly wounded heroines.  What prompted you to make the choices for her character you did?

SM:   The spark for the story, which also formed a chunk of Clancy’s issues, was a Tweet. It depicted a couple caught in an intimate moment on the guy’s video conferencing software which, somehow, he’d managed to leave running. Because he was fully dressed it wasn’t pornographic but the activity in which they were engaged couldn’t be mistaken. I began to wonder whether the man and woman were single or, if not, who they were cheating on. How did the video, or a still from it, make it onto social media? Where were these people employed? Did they lose their jobs? Did it cause embarrassment to the employer as well as to the couple? Or, as the still didn’t show faces, did they get away with it? Who else had been involved in the video call?

MW:   Why head to the seaside this time?

SM:   I like the seaside! Some time ago I read an article about a tiny village that was up for sale - the whole village. I think it was forty-seven cottages and a manor house. At first my idea was that Clancy would somehow get the money to buy the whole thing but I soon went off that, partly because my agent wasn’t keen. Only a couple of things stuck: a very small village; the kind of problems some rural communities experience with mobile signal and broadband.

The connectivity issues were quite a driving factor for the story and for as many plot points as it gave me, it took others away. A place I remembered visiting that suffering signal issues was north Norfolk so I put my village, Nelson’s Bar, there. It doesn’t hurt that I love the area and thoroughly enjoyed a visit of a few days to research. The mobile signal is much improved there now but there were enough ‘not-spots’ to work with my story. To make certain, I put Nelson’s Bar up on a headland that protrudes out to sea so for it to lie in a no-signal area was credible.
MW:   What prompted your decision that Aaron and Clancy should have a history, however brief and unsatisfactory?

SM:   It added to Clancy’s issues and gave Aaron something to deal with. When they’d met in the run-up to the wedding of Clancy’s cousin Alice and Aaron’s brother Lee sparks had ignited between them. For that to combust in the form of a furious row when Alice left Lee at the altar set them for an awkward intervening span of years when Clancy was left looking after Alice’s half of Roundhouse Row and Aaron had bought Lee out of his half.

Fiction isn’t interesting without conflict. Also, when protagonists have history it makes the opening of the book pretty interesting.

MW:   You acknowledge struggling with this novel.  After so many years of writing them, why do you think this happened?

SM:   I’ve asked myself this question A LOT! I think I had so many things I wanted to include in this book that I wanted to get it down while it was all in my head. This led me to neglect my own golden rules of knowing, even before I start writing, the major conflicts of each central character and his or her major goals. This meant I had to work them out as I went along. It made me worry about focus and also I went up a big blind alley that took a bit of reversing out of. I can’t remember exactly what it was but I remember going to bed one night and suddenly breaking out in a sweat as I realised that my story threads had no chance of coming together. In that situation, it’s not just words that are wasted; time is wasted too. With two books a year to write I’m always time-poor so I got a bit stressy.

In the end, I decided to send the second draft in to my editor with everything crossed and see what she thought. It was such an incredible relief to receive the lightest edit notes ever! Either I was stressing about nothing or I’d wrangled the problems into submission.

And, as you know, my trusted beta reader (a chap called Mark West) liked it too!

MW:   Thanks, Sue and good luck with the book!

SM:   Thank you, for inviting me onto your blog and for taking part in my blog tour. I owe you a large diet Pepsi.

Sue Moorcroft is a Sunday Times and international bestselling author and has reached the coveted #1 spot on Amazon Kindle. She’s won the Readers’ Best Romantic Novel award and the Katie Fforde Bursary, and has been nominated for several other awards, including the Romantic Novel of the Year Awards.