Hell Ship, by Benedict J. Jones (a review and Q&A) 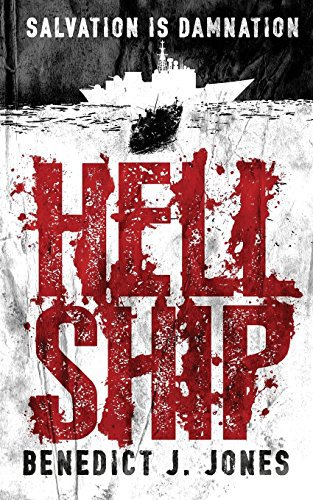 1944, The Malacca Straights; Blood slicks the deck of a Japanese ship as a terrible ritual is enacting to aid the failing Imperial Forces against the Allies. The ritual rends the very fabric of our world giving access to another realm beyond the ken of man.

Nine survivors from the torpedoed Empire Carew are left adrift in a lifeboat but after weeks in the water they find haven on an abandoned ship they find floating in a strange fog – The Shinjuku Maru.

The Shinjuku Maru has been there before…

The Empire Carew is torpedoed in The Malacca Straights in 1944.  Nine survivors make it to a lifeboat (a motley crew comprising three seasoned sailors, a rookie officer, a radio operator, a singer and her manager, a cook and an Australian nurse) but then spend weeks existing on it with no supplies until they come across The Shinjuku Maru, a ship floating in a strange fog.  They board it, to find blood on the decks and no crew on board and then things start to go from bad to worse.

I like variety in my horror and have no problem mixing the quieter, supernatural stuff with the lurid, over-the-top style so beloved of paperback writers in the 70s and 80s and in that regard, Jones is my ideal writer.  Having read his Slaughter Beach, a cracking piece of pulp, a few years ago and thoroughly enjoyed it, I was looking forward to this and wasn’t disappointed, even though it’s a completely different beast.  Opening with a harsh and harrowing prologue, it sets about introducing the crew of the lifeboat and the characters leap off the page, instantly living and breathing.  We share their predicament - resorting to shooting seagulls to drink the blood before they eat them - and it’s a relief when they finally spot the ship.  Here, though, the novella really moves into horror territory and Jones makes the best of his restricted location, ramping up the sense of tension, isolation and claustrophobia, while hinting at darker forces gathering in the shadows in the corners of rooms.  When hell finally does break loose - and it properly does - the pace whips you through the pages, as our crew is split up and picked off, featuring bone crunching violence that is brutal, realistic and never gratuitous.

Scary, thrilling, often amusing (especially in the interplay between some of the characters) but above all relentless, this has a great pace and a superb sense of location, which is well realised and maintained.  If you’re looking for a grim and gruesome horror novella, this is ideal and I highly recommend it.

I enjoyed the story so much, I decided to ask Ben some questions about it and he was gracious enough to answer.

MW:   You’ve included a powerful author’s note, stating this is a fiction but based on atrocities that occurred during World War Two, but what led you to write the novella? 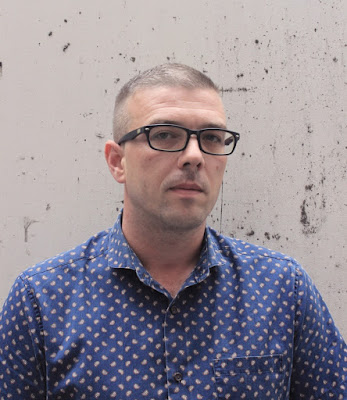 BJ:   I actually came across the atrocities while researching the basic idea for Hell Ship – which was initially to be set on a German surface raider in the Second World War. I quickly realised that setting it in the far east would work better. The more I read of the massacres and also of the “hell ships” used to transport allied POWs the more I was struck by the question of why. In some ways the rituals are a way of me trying to give a “why” to it all even though none really exists and it is simply an illustration of how inhumane man can be to his fellow man in certain times.

MW:   How much research was involved?

BJ:   A fair bit. Some things I knew already from reading and previous research but I was drawn to find out more about the merchant seamen during World War two. My family is originally from the north east of England and we have strong ties to the Merchant Navy, as well as the ship building industry and the Royal Navy. Once I started researching shipwreck survivors I came across some really interesting accounts and all that fed into Hell Ship – including that of Poon Lim who spent 133 days adrift.

MW:   The prologue, in particular, is gruelling.  How uncomfortable was that to research and write?

BJ:   It was imagining those nightmarish conditions that really spurred me on to write the story. It just seemed so raw and visceral, and once I tried to put myself in the heads that set me off writing. There was very little re-writing done to the prologue once I had it down. I was lucky that it was just one of those pieces that “wanted” to come out onto the page and I’m delighted by the way it has been affecting readers.

MW:   Your characters leap off the page - which of them was your favourite to write?

BJ:   Probably Busby. Originally Connolly was intended to be more of a “hero” type but as the story came together he faded into the background somewhat as other characters pushed to the fore. I really like the relationship between Busby and Snell – one of the early scenes between them on the life boat came to me fully formed and I always knew where that pair were headed. Lily and Conrad were another pair of characters that I enjoyed exploring but their relationship was somewhat different, revealing itself to me as I wrote it rather than something I had thought out beforehand.

MW:   I liked the Busby/Snell rapport too and thought that worked very well.  Now The Shinjuku Maru is an excellent location.  Did you base it on a real ship, or did it all come from your imagination (and if so, did you create a map of it)?

BJ:   It was a composite of several of the merchant ships that were really used by the Japanese to transport prisoners. I think the main design came from a refrigerator ship. I did starts making a map for it but soon realised that as things turned “weird” the Shinjuku Maru was a bit more fluid that most ships anyway…

BJ:   There’s a new Charlie Bars novel slated for release early in 2019 and I am beavering away on various other projects as well.

Benedict J. Jones is a writer of crime, horror and westerns from south-east London.  Perhaps best known for the Charlie Bars series of neo-noir novels and the splatter punk novella Slaughter Beach, he can be found online at benedictjones.com and is great company at Cons.