Thirty years ago, on Saturday 8th October 1988, I stood across from the Royal Victoria Docks, in the London Docklands, on a patch of derelict land with 99,999 other people and watched the sky light up.  I was there with my best friend Nick, my friend Craig (Tankard) and his best mate Craig (Woodford) and we were part of the audience for the first show of Jean Michel Jarre’s Destination Docklands concert. 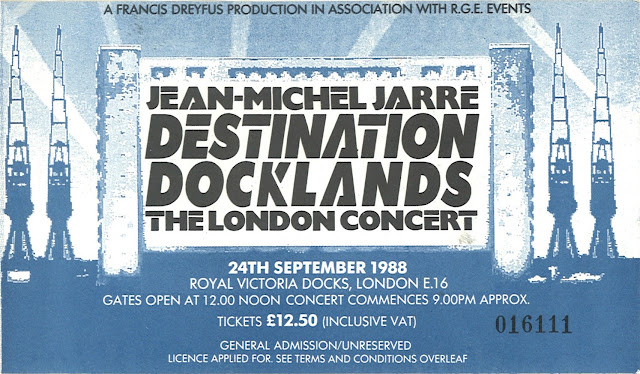 Destination Docklands was originally planned as a one-off event on September 24th to coincide with the release of Jarre’s new album Revolutions.  However, negotiations between the organisers, Newham Borough Council and the London Fire Brigade over logistical and safety concerns meant it was delayed.  While Jarre and his team were searching for alternative venues, a compromise was reached to split the event into two concerts, splitting the expected 200,000 audience and staging it over the weekend of October 8th and 9th.

Jarre said he chose the area not only because it was a desolate environment but also because the architecture was “ideally suited for” his music.  The show utilised World War II searchlights, lasers, images projected onto the Spillers Millennium Mills building (which was painted white specially) and a huge amount of fireworks.  Unfortunately, the timing didn’t help with the weather and although we on the Saturday escaped the elements, those poor sods on Sunday weren’t so lucky and most of the second concert took place in heavy rain.

The stage, which Jarre called his “battleship”, was built over several barges and according to his website weighed 1,000 tonnes.  It housed him, the musicians (including Hank Marvin who played on London Kid and Fourth Rendez-vous), a choir and orchestra with the original intention being for it the "battleship" to traverse the docks but the poor weather and health and safety concerns put paid to that.
The show was broken into four parts, with relevant graphics for each era (Sir Alfred Hitchcock and Michael Caine appeared in the Swinging 60’s bit) and Jarre was joined by Mireille Pombo and a choir from Mali for September, a piece dedicated to Dulcie September, the South African anti-apartheid political activist assassinated in Paris in March of 1988.
Part 1:Industrial Revolution
1. Industrial Revolution, Overture
2. Industrial Revolution (part 1 3)
3. Equinoxe 5
4. Ethnicolor 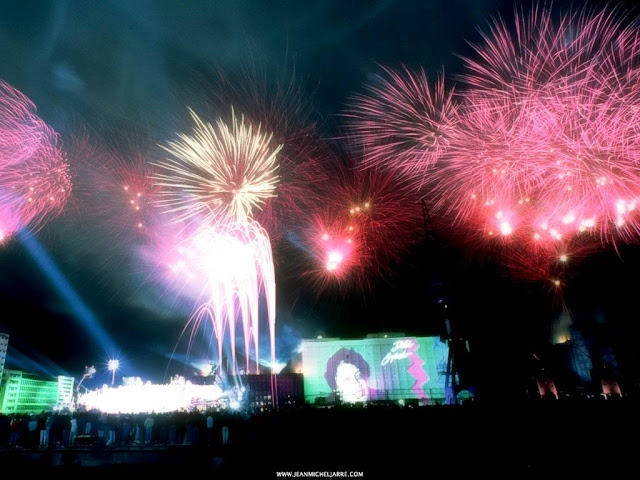 The day for us started early.  I picked Nick up at 7.20am, we got Craig T and dropped my car at Craig W’s house.  His dad drove us to Leicester where we had breakfast and caught the bus.  We got into London for 1.45 (must have been a lot of pick-ups on the way), queued for 2 hours and went into the site.  I remember a lot of wasteground and derelict buildings, one of which seemed to be full of props - when I later saw the film Hardware I seemed to recognise a lot of things.

We had standing tickets and wandered around, bought food from some of the stalls (we couldn’t get out of the site, so existed on crappy pies and chips) and tried to figure out where best to stand.  Then it was show-time (the following is from my diary): “Jarre came on at 8pm and it was incredible, I’d never have believed it.  Some of the pictures weren’t so good but the lights, lasers, fireworks and the laser harp were astonishing”.  The concert over, the site buzzing, our ears ringing, we headed back to the coach.  Nick and I sat together for the journey home and he fell asleep almost as soon as the bus started to move but I don’t recall sleeping at all, I just remember watching the world go by still on a high from the gig.

The Saturday performance was broadcast live on BBC Radio One while the Sunday show was recorded for a live album (Jarre Live!, released in 1989 and re-issued in 1996 as Destination Docklands (The London Concert)).  The Sunday show was also filmed and shown on Christmas Day 1988 on Channel 4 before being released on VHS in 1989.
The area has been transformed radically since the concerts with the ExCeL Exhibition Centre now occupying the space where me and the rest of the crowd stood and cable cars carry tourists over the Thames to the Royal Albert Docks.

A documentary was broadcast on ITV in 1989 covering the behind-the-scenes of the event, directed by Mike Mansfield who also directed the film of main concert.