The Little Village Christmas, an interview with Sue Moorcroft

As regular readers of the blog will know, I’ve been friends with Sue Moorcroft since 1999 when I first joined Kettering Writers Group and, as a genre writer (the group leader had more of a literary persuasion), I was sat at the back with her and we had great fun (we were the only ones publishing regularly).  Since then, she's gone from strength to strength and I've been fortunate to interview her several times on the blog (which you can read  here, here, here and here).  Tomorrow sees the paperback launch of her latest novel The Little Village Christmas (the first in her new three-book deal with Avon Books) and I loved it, partly because it's a great story well told but also because it revisits her fictional village of Middledip.  With that in mind, Sue & I took some time to sit down for a Publication Day Eve interview… 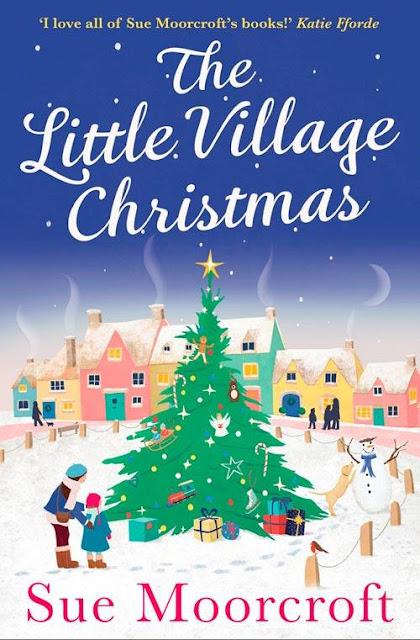 MW:  Thanks for sitting down with me, Sue, on the eve of the paperback publication.  The ebook was launched on 9th October, how does it feel having two launches?

SM: Getting the ebook out a month or so before the paperback and audio is something I’ve encountered before. It allows reviews to be posted, which helps the sales team sell the paperback into retailers (if the reviews are good). This time there’s only four weeks between ebook and paperback releases but it was about eight for The Christmas Promise, last year, when it did seem as if the paperback release took a long time to come around.

Generally, I feel having two launches is fine as it provides two opportunities for publication-day promotion. It does eat up twice as much time though.

My last book, Just for the Holidays, was released in ebook, paperback and audio on the same day. It seems as if summer books and Christmas books have different selling patterns.

MW:  Does the staggered launch affect your promotional activities for the book?

SM: Yes. We keep things like radio interviews back for the paperback. Presenters are sent a copy ahead of time and, if I’m lucky, read some of the book and have it in front of them on the day. I quite often work with different people at my publisher’s too – the digital media manager for the ebook and the publicist for the paperback. We aim a lot of digital stuff, like Twitter chats, at the ebook. For The Little Village Christmas the blog tour has been put together to cover both ebook and paperback/audio, which is great.

MW:  Since this is your third Avon novel, are you finding the promotional process any easier?

SM: I’m not sure whether ‘easier’ is the correct term. I enjoy promo, so long as I have time to do it. I’m spending a couple of days on writing interviews such as this one, messing around with YouTube videos, going on the radio and making a few graphics for social media. Then there’s a competition for those who read my newsletter, one for Twitter and one for my street team, Team Sue Moorcroft.

MW:  How does your street team fit into this?

SM: I feel privileged to have a street team. Simply put, a street team is made up of people who like someone’s work so much that they’re willing to tell others about it. A reader suggested it to me. At the time, I felt that only big American authors had street teams, but I cautiously dipped a toe in the water and people were kind enough to join. It’s run through a closed Facebook group where I can post news and gossip and ask people to share my social media posts. I’m doubly fortunate that some members of my street team are book bloggers and so they have a good reach with the reading public.

There’s more information about Team Sue Moorcroft on my website.

MW:  This is your second Christmas novel (following last year’s Number One Bestseller The Christmas Promise, which I wrote about here), do you feel any better about the festive period now?

SM: Yes! It’s amazing how having a bestselling Christmas book has changed my view of the season. Also, it warms my heart to see books being given as gifts, and Christmas books for Christmas gifts are popular, so I had a fair number of reviews coming through in January and February as The Christmas Promise made it to the top of people’s ‘to be read’ piles.

MW:  Do you find it difficult writing a winter novel during spring and summer?

SM: Not terribly so. Having written for magazines with six-month lead-ins for some years I did get used to writing my Christmas stories in June and summer stories in December. Writers have to have good imaginations – I don’t expect you ever did research with real demons or ghosts when writing about them! Writers adapt.

Having said all that, this summer I was able to write part of One Summer in Italy while in Italy and I did find it extremely helpful in putting over atmosphere. My agent and editor have both commented on how easily they were able to ‘put themselves there’.

MW:  I liked The Little Village Christmas a great deal, as I mentioned before, not only because it’s a cracking story but also because it revisits Middledip.  How was that for you?

SM: Oh, now, that was lovely. I visited ‘my’ village for a chapter or two in The Christmas Promise and it made me hungry to get back there for a whole book, hence The Little Village Christmas. (My books are all stand-alone but several of them are set in Middledip.) I found that quite a few things had changed in my absence. Gwen’s no longer at the shop (although Tubb is still at the pub) and a couple of continuing minor characters had seen changes in their lives.

MW:  Was it good fun involving characters from previous novels?  They aren’t used as in-jokes (they are integral to the story) but for longtime readers like myself, there was a nice resonance to seeing them in the pub.

SM: Yes, definitely. In particular, The Little Village Christmas has provided me with the opportunity of learning more about Carola, who’s head of the village hall committee and is always trying to involve people in community projects. She entered the book when things weren’t going well for her and it took her a long time to admit the truth to Alexia. Alexia’s a bit of a reluctant heroine, as she’s about to leave the village when the book starts, and it’s ties to villagers like Carola that make it hard to actually make the break. The project Alexia’s working on, transforming The Angel pub into The Angel Community Café, goes very wrong when someone runs away with all the money so she feels she has to mount a rescue mission too.

Gabe and his pony, Snobby, also play strong supporting roles. I always enjoyed Gabe. He’s a bank manager who’s never cut his hair since he left the bank and lives peaceably on his little plot of land with his cats and chickens. Gabe’s the uncle of my hero, Ben Hardaker. Ben’s a woodsman who’s come to live only on the very fringes of the little village of Middledip and he fits into Gabe’s family a treat. He describes himself as ‘an oddball having a bad day’. He’s really trying to move on when he meets Alexia and for a while it looks as if she’s just what he needs … but life’s never that easy. He finds himself drawn into Alexia’s problems no matter how hard he resists.
MW:  I’ve timed the interview now because I’ve yet to make the transition to Kindle and I know you’re a keen e-reader.  Do you ever read paperbacks these days?

SM: Definitely, and hardbacks too. I’m reading the new book by F1 World Champion Jenson Button at the moment, and that’s in hardback. (I wonder whether he’s reading The Little Village Christmas?) I still have several hundred paperbacks and hardbacks and rarely find rereading a hardship. I have to be honest and say that I find an e-reader easier to handle, though, as I have a nerve problem in my left arm and an e-reader can be held in one hand.

SM: I have structural edits to tweak on One Summer in Italy, but at the same time I’m planning my next Christmas book. I don’t have a title for it yet but I do know it’s going to be set in London as well as in Middledip and that it will be about Joe, who’s gone from rags to riches, and Georgie, who’s gone from riches to rags. At the moment I’m just bringing together background information but I’m really looking forward to getting into it because this is the book that’s been hammering at the back of my mind while I was writing One Summer in Italy. At least this means that I’m planning a Christmas book in the run up to Christmas, and I have the promo for The Little Village Christmas, of course!

Thanks for inviting me over, Mark. As always, I’ve enjoyed our chat.