It's Halloween, when all the ghosts and ghouls come calling (usually for chocolate), when the evenings are dark and the air smells of woodsmoke and the thoughts of us all turn to the idea of watching something scary and creepy. 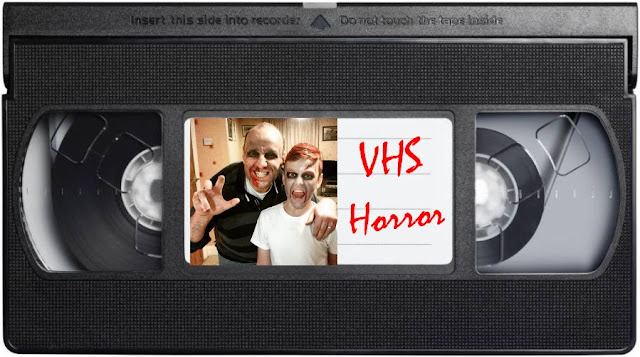 After last years Halloween post (which you can read here) featuring behind-the-scenes shots from scary films, I've decided this time to go in a different direction.  As regular readers of the blog will know, I love artwork that is cheesy, sleazy and often ever-so-slightly over the top and if that's what you're looking for, you can't go wrong with 80s video covers.  Back then, as video was starting to make inroads into people's houses, corner shops and town centre shops alike suddenly brought in racks and shelves, filling them with gaudily decorated boxes of horror films that me and my friends were very keen to watch.  The 1984 Video Recordings Act curtailed some of those adventures but there was still plenty for us to catch up on and we most certainly did.  The players were expensive and only two of our gang had them - Steve's VHS came complete with a remote control that had to be plugged in and David had a top-loader Beta, soon replaced by a top-loader VHS.  Later, after making several (very) low budget films with David's brother Matt, he & I set up an informal little group we called The Tacky Video Society to watch just these kind of treasures.  In fact, sometimes a visit to the local 5 Star Video in Rothwell would consist of scanning the horror shelves until artwork caught our eye and renting that film, regardless of whether or not we knew anything about it.

And here are a few examples.

Happy Halloween!
I saw this sometime in the mid-80s and, for the most part, found it plodding and dreary.  But then something very, very weird happens between the kid (who was actually a 25-year-old actor) and his mother which propels this to another level altogether.

Another of my suggestions to the group, this went down very well.  So well, in fact, that years later I was able to convince my best friend Nick to go and see Hellraiser with me by telling him it wouldn't be as bad as this...

One of my favourite horror films (I wrote an in-depth essay about it for This Is Horror, which you can read here), this is the cover of the pre-certificate VHS sleeve before the film ran into trouble.  Although it was passed uncut for a British theatrical release, it fell foul of the Video Recordings Act and was prosecuted and banned as a 'video nasty' (which it quite clearly isn't).  It was re-released in the late 80s with 5 seconds of cuts on the Video Collection label, then finally released uncut in 1999 by Polygram.  I saw it on 30th July 1985 (I keep a diary) with the gang and it was a banner day for us, when we rented three films from Dines' Video Library (which is now long-gone) - Twilight Zone: The Movie, Evil-Speak (another video nasty casualty) and this.  Good times...

I watched this in 1983 (I'm sure we rented the film but that can't have been possible) on a bright Saturday morning, in a sun-filled room, with David and Matt and all three of us were absolutely terrified.

By the time this was released in 1983 by Palace Pictures, we'd been talking about it at school for at least a year and most people 'knew someone' who'd seen it and was quite happy to talk up the gory bits.  This doubled when it became a 'video nasty' and was banned, even though the BBFC had passed it for theatrical release in 1982 with minor cuts.  The VHS accounted for 40 prosecutions (the vast majority of which were overturned) and the BBFC was forced to about-face on it.  Palace then sent out replacement sleeves with a grey banner across the front: "Not guilty! - The Evil Dead is back, B.F.F.C. certificate applied for".  It was finally passed uncut by the BBFC in June 2002.

I convinced my friend Steve this would be a great film to watch (I put forth that Debbie Harry was in it, we'd both loved Scanners and I convinced him Rick Baker's effects were always great) - I really enjoyed it, he really didn't.  My love for it has grown over the years (I wrote about it here) and I recommend it whole-heartedly!
(there was a later VHS release, which I bought, that was labelled as 'uncut'.  And if you click on the image above, you'll see, below the credit block: "This film received an '18' certificate for cinema release.  The version of the film comprised in the videocassette has been further edited at the discrection of CIC Video".  This was because, in a case of very bad timing, the film fell foul of the Video Recordings Act with police forces in Leicestershire and Nottinghamshire apparently warning dealers against stocking the film even before it had been released.  CIC pre-empted this and went at the film with scissors, as it was due for release when 'Video Nasty' hysteria was at its peak.  It's now available uncut and, to be best of my knowledge, the film never influenced anyone unduly - or, at least, if anybody has ever had a Betamax tape slotted into a vagina which has magically appeared in their stomach, I've never read about it...)

I can't remember now if I first saw this on VHS or Alex Cox's wonderful Moviedrome but I do remember I liked it a lot.

There's so much to like in this film - O'Bannon's script, the acting, Linnea Quigley, Tar Man - where do you start?

I actually saw this at the cinema first, with my friend Craig Tankard and the artwork is perfect for the film (for which my affection remains strong decades later!)

Another cinema first (again with Craig), this has the creative crew of Re-Animator back with Jeffrey Combs, Barbara Crampton and their second loose Lovecraft adaption.  Less gory, certainly, but sexier!

Years later, after my friend David Roberts & I had been to see the first Lord Of The Rings film at the cinema, I told him about this but - crucially - forgot to mention the two films were remarkably different.  He gave me the DVD back the next time we met up and said "I didn't watch all of it..."

I first read about this in either Fangoria or Gorezone in the mid-80s and was very keen to see it, though it proved elusive and I didn't get to watch it until much, much later.  I did, however, enjoy it as much as I hoped I would.

I didn't see this until long after I watched Phantasm 2, another cinema first with Craig, at the Forum cinema in Corby (also now long-gone).  At some point in the run the film had broken and been patched up so when we watched it, there's a big jump at the climax and it wasn't until years later, watching it again, that I realised the ending wasn't as surreal as I'd originally thought...

I was introduced to this by Matt, who adored it and I could see his point - a solid, fun exploitation film, with a smart cast, a great baddie and some glorious special effects.

My second glimpse into the world of Frank Henenlotter (following the gloriously low-budget Basket Case) and, to this day, it remains my second favourite of his films after the wonderful Frankenhooker ("wanna date?").  Even better (and much later), through the wonders of first LiveJournal and then Facebook, I became friends with Greg Lamberson who worked on this.


with thanks to mutantskeleton and Living On Video (Covers) for some of the scans
Video Nasty information from The Video Nasties Furore: The Prosecution of the DPP's 74, by Neil Christopher
Posted by Mark West at 09:00:00