Behind Her Eyes, by Sarah Pinborough (a review)

In a new edition of the occasional series, I want to tell you about a book that I've read and loved, which I think adds to the genre (thriller, in this case) and that I think you'll enjoy if you're a fan. 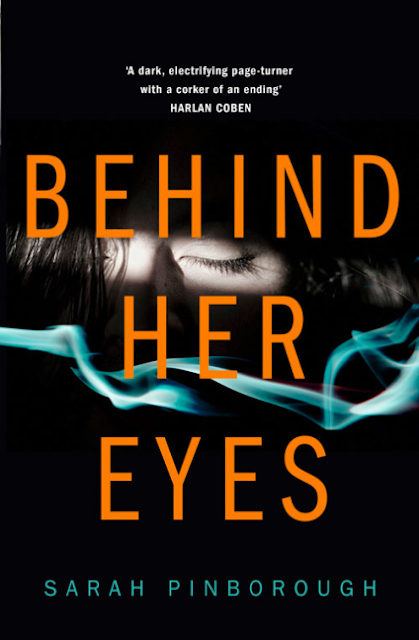 I'm read a lot more psychological  thrillers over the past couple of years (helped, no doubt, by my decision to write a thriller next) but I find them much harder to review properly because it would be all too easy to give the game away.  This novel is no exception (hence the shorter review) but it's by a writer I like a great deal (you can read my reviews of her novels The Death House and The Language Of Dying on these links) and her novel from last year, 13 Minutes, was my second favourite read of 2016.

Which leads me to Behind Her Eyes, the Sunday Times number one bestseller (how about that), marketed with the hashtag campaign #wtfthatending.  Being that upfront was, I convinced myself, a sure fire way of having the reader twig before the end but that honestly doesn't happen.  The ending is astonishing, it really is.

And whatever you do, DON’T give away that ending…

Louise
Since her husband walked out, Louise has made her son her world, supporting them both with her part-time job. But all that changes when she meets…

David
Young, successful and charming – Louise cannot believe a man like him would look at her twice let alone be attracted to her. But that all comes to a grinding halt when she meets his wife…

Adele
Beautiful, elegant and sweet – Louise's new friend seems perfect in every way. As she becomes obsessed by this flawless couple, entangled in the intricate web of their marriage, they each, in turn, reach out to her.

But only when she gets to know them both does she begin to see the cracks… Is David really is the man she thought she knew and is Adele as vulnerable as she appears?
Just what terrible secrets are they both hiding and how far will they go to keep them?


Since her husband Ian walked out to start a new life with his girlfriend, Louise has made her son her world, supporting them both with her part-time job.  One night, she meets a man in a bar and, attracted to one another, they kiss.  She later discovers he’s her new boss, David but they manage to put things aside enough to keep things professional and then Louise meets his wife, Adele.  The two women quickly become fast-friends and as Louise gets to know them both, she begins to see the cracks.  Is David really is the man she thought she knew and is Adele as vulnerable as she appears?  Just what terrible secrets are they both hiding and how far will they go to keep them?

I find it difficult to write reviews for thrillers where there's a key twist and this is no different though it's much more than that, much cleverer than that and there’s so much to enjoy beyond the thriller trappings.  The three main characters (there are others, but this small principal cast dominate the book) are superbly drawn and the book is told from three viewpoints - Louise and Adele in the present and Adele in the past - that build nicely and show off two sides to most of the situations.  Except, as time goes on, we’re not entirely sure which, if either of them, is telling us the whole story.  David, who doesn’t get his own viewpoint, went from being a villain to a goodie and back again several times in my head and that’s one of the ways this book works so well - everything makes sense, everything stacks up perfectly as it goes on and the whole thing hums with the precise movement of a quartz clock.  The story is built on detail and some of them are beautifully observed - especially those between Louise and her son Adam - but none of this slows the plot, which races along.

With solid characters, a good sense of location and a central mystery that unpeels slowly but surely, this is a terrific novel (and I didn’t get the final twist at all) that I would thoroughly recommend.