The Grieving Stones, by Gary McMahon (a review) 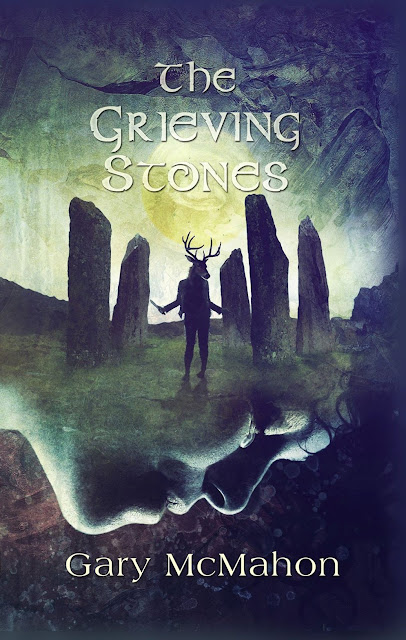 A small therapy group arrives at Grief House hoping that a combination of isolation and hard work will help them begin the healing process each of them so desperately needs.

But their presence has awakened something in the old dwelling. Something linked to the ancient stone megaliths at the rear of the property and a terrible crime, committed centuries before.

Before the weekend is over, the group will learn the secrets of the Grieving Stones, and come to understand the true meaning of transformation.

“When she looked at the windows, a premature night had fallen. The house smelled of herbs and butchered meat.”

Alice, whose husband Tony killed himself, is a member of a counselling group run by the enigmatic Clive Munroe.  When he suggests that a select group spend the weekend at a dilapidated building in the Lake District called Grief House, she decides to go though she has her reservations - namely that she doesn’t really like any of her fellow members and thinks Clive might like her in the wrong way.  On the journey to Ullswater, Clive hits an animal and kills it, which shocks them all even though none of them can properly identify the beast.  Then, when they reach the house, it’s in a lot worse state than they’d thought.

I like Gary McMahon and I like his writing, which always contains a brutal honesty mixed with a dark sense of the elegance to create fear and tension in even the most mundane of situations.   This is no different.  Location plays a huge part and the combined beauty and isolation of the Lake District is wonderfully used, especially over the hill from the house where the Grieving Stones stand.  McMahon also taps into the history of the area, weaving in the perfectly pitched tale of the Staple Sisters from the 1600s, half-believed to be witches but since they helped local folk and farmers they were left alone.  Once Alice latches onto their story - though a clever plot device - things begin to unravel and build themselves up at pace.  All of the characters are thoroughly believeable, with each member of the group - from Moira, who’s lost her son, to Jake, whose sister was murdered; from Steve who lost his wife, to Clive who might not be the person he presents to them all - being well-rounded and human.  Alice is a much more complex creation, whose layers begin to shed early on at the accident and keep falling away as the story progresses - that we feel so strongly for her makes each incident hit like a blow.  The story moves at a measured pace, giving the characters (and the house) time to breathe and this works well, as we uncover each revelation along with the characters, building to an awful sense of understanding about Mag and Meg Staple (“They were not good, they were not evil.  They were just two sisters trying to eke out a living in a world that did not look kindly upon women who lived without a man.”).  The supernatural elements are well used and nicely frightening, utilising the half-glimpsed to paint a bigger terrifying picture - the punch dummy in the attic, the curious reflection in the kitchen window and the apparently backwards girl.

This is an excellent piece of work, genuinely unsettling and frightening, whilst also being spot-on about the human condition in dealing with loss, grief and guilt.  Packed with great lines (“The brakes screeched like frightened birds”), scary set pieces and a sense of foreboding, this is well worth a read and I highly recommend it.

The book will be published on 16th July and launched at next weekend's Edge-Lit.