Not that I need much of an excuse to talk about Star Wars on the blog (see here if you don't believe me), but to tie in with the DVD release of The Force Awakens, I thought I'd post a couple of reviews relating to the film.
The three of us - Alison, Dude & me - went to see it on the 18th of December (I booked the tickets as soon as I was able, having been looking forward to the film since it was announced).

Alison is a Star Wars fan almost by osmosis (when the special editions were re-released in 1997, she came to see Star Wars and Jedi with me) and Dude likes the original trilogy (since he's seen it so often) and the prequels (it's his age, not me forcing him to, I'm not that awful a parent).

Dude & I loved the film (there were parts where I wanted to cheer) so he & I went back to see it again on the 9th of January. 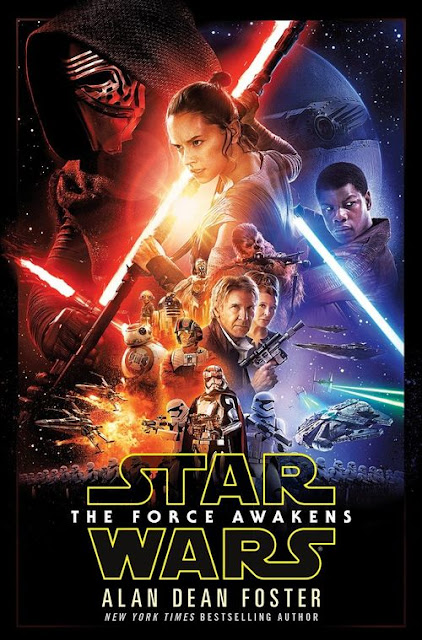 Set years after Return of the Jedi, this stunning new action-packed adventure rockets us back into the world of Princess Leia, Han Solo, Chewbacca, C-3PO, R2-D2, and Luke Skywalker, while introducing a host of exciting new characters. Darth Vader may have been redeemed and the Emperor vanquished, but peace can be fleeting, and evil does not easily relent. Yet the simple belief in good can still empower ordinary individuals to rise and meet the greatest challenges.

So return to that galaxy far, far away, and prepare yourself for what happens when the Force awakens. . . .

Set 30 years after the events of “Return Of The Jedi”, Luke Skywalker has vanished after a pupil of his turned to the Dark Side.  In his absence, the First Order has risen from the ashes of the Empire and is intent on finding him.  General Leia Organa, leader of the Resistance, has learned from an old ally that there might be a clue to Luke’s whereabouts and she sends her best pilot, Poe Dameron, to retrieve it.

To set my stall from the off, I am a huge “Star Wars” fan and my first introduction to the work of Alan Dean Foster was his novelisation for the original film in 1977 though I haven’t read that for a while (but I’m tempted to go back now).  Sticking fairly close to the script (with some nice additions), Foster does a good job of dealing with all of the various locales, easing older characters back into the action (and it’s nice to see Han & Leia interact again) but also doing well with the new characters and his work with Rey on Jakku is particularly good, capturing her sense of loneliness well.  Kylo Ren also comes across more clearly here, his inner struggle well realised - and the professional jealousy he & Hux share - and Leader Snoke casts a more chilling presence too.

The novel makes good use of location, especially Starkiller Base and Foster’s a sure hand at dealing with technology, giving the reader just enough to picture the item and then treating it as though it’s been around forever.  He also does a good job with the dialogue - one of my highlights from the film was the verbal interplay between the characters and it’s captured well here, reading as funny as it did on screen.  It also has that wonderful sense, of time having passed and adventures moving into history - “Luke Skywalker?” asks Rey, “I thought he was just a myth.”  On the Falcon, Finn knows Solo as a Rebellion General but Rey knows him as a smuggler and when she mistakes the time the ship made the Kessel Run (she says fourteen), he sharply corrects her to twelve.

Foster also includes a few sequences that, although they were probably deleted from the film for timing reasons, work well.  Beyond the opening sequence with Leia, the first new part is Poe’s escape from Jakku, an adventure with Naka Iit which is good fun.  There’s a sequence with Korr Sella (an aide of Leia) who’s sent on a mission to the Hosnian system just before it’s wiped out by Starkiller (she’s in the film but we don’t find out her name) and, wonderfully, Chewie finally gets to rip someone’s arm off at Maz Katana’s place.  The last key sequence is on Starkiller, which features a speeder chase between Rey & Finn and a load of troopers which is exciting and explains why they’re so far above Han and Chewie for the final showdown with Kylo Ren.

Well written (though I got the curious sense that Foster was under-writing and certainly not creating something as lush and deep as the original novelisation), well realised and full of pace, this does the film proud and I would highly recommend it.


The Art of Star Wars: The Force Awakens
by Phil Szostak 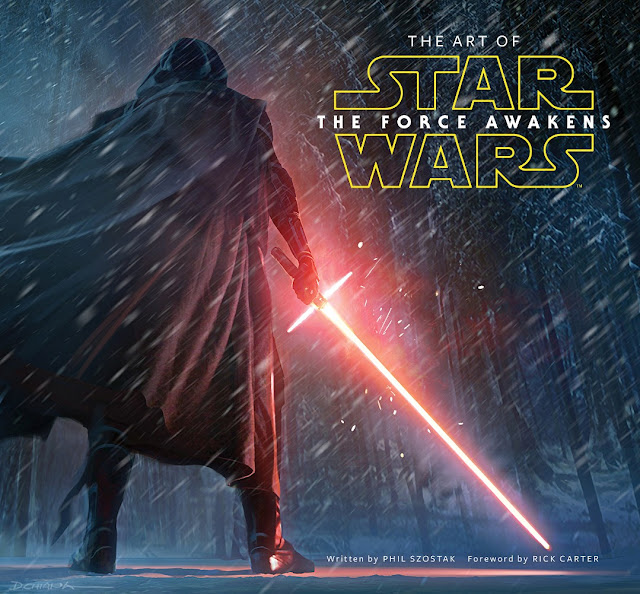 Lucasfilm have long known how to produce good art books and, thankfully, this is absolutely no different.  Taking the story from the very start of the process in 2012, Szostak follows the team of Visualists working under Rick Carter - and, later, Darren Gilford, though it’s not made clear why it was necessary to bring him in - as they come up with concepts for sequences, even before the scriptwriter and director are on board.  Seeing the story - and images - evolve organically is fascinating and the artwork is exemplary.  Helping the book, for me, is a production diary that starts around the time of pre-production, a few paragraphs for every month, following the process up to post and giving out little details that help build a bigger picture.

But the art is the real star here and the beautifully reproduced images - from a varied team including Doug Chiang, Ryan Church and Eric Tiemens (who all worked on the prequels), Christian Alzmann, Chris Bonura, Andree Wallin and more - are gorgeous.  Of the hundreds of pieces on display, my favourites include “The Sunset”, Chiang’s wonderful riff on “Apocalypse Now”, Andree Wallin’s “AT-AT Idea”, Kevin Jenkins’ “Rally Site Troops View”, “Spotlight” by Kevin Jenkins (which presents the reasoning why concept art is so important as this immediately shows you the moment when Han and Ren confront one another which might not work so well with words) and “Rey Emerges” by Yanick Dusseault, which shows the scale superbly.

I read a little while back that George Lucas was disappointed at how retro some of the film looked and whilst I enjoyed seeing little things in the film - the heads-up display in the Falcon, the Brutalist aspects of the Empire - I do understand what he means and the book confirms it.  Ralph McQuarrie’s work, both used and unused, was re-examined by the Visualists and pieces were cherry-picked for the new film.  Admittedly, when I read this, all I could think was “the lucky devils!” for gaining access to the fabled Lucasfilm archives.

My one gripe would be the way that Szostak and (especially) Carter see themselves - the writer mentions Kathleen Kennedy (the producer) “reaching out” to him, rather than calling him and asking for a meeting.  Carter goes further in the pretension stakes (I’d like to believe he’s being ironic about his own abilities but I really don’t think he is) and contrasts badly with the way Ralph McQuarrie and Joe Johnston have talked about themselves over the years plus you wouldn’t need to argue very hard that their contribution to the Star Wars universe - and, by extension, pop culture - is far greater than Carter will ever manage.

That niggle aside (easily done, just skip the Foreword), this is an excellent companion to a superb film and one I would highly recommend.

Some examples of the superb concept art

And just because this clip, first shown at the San Diego Comic-Con in 2015, gets better after you see the film, here it is...