In a new edition of the occasional series, I want to tell you about a book that I've read and loved, which I think adds to the horror genre and that I think you'll enjoy if you're a fan.  Of course, in this case the book is twenty eight years old so chances are you might have already heard of it.  If it's any consolation, I've had this on my bookshelf since 1987 or so (the Paperjacks edition published in 1986) where it’s survived house moves, book culls and everything else, but having now read it (some 27 years after buying it), I wish I’d done so ages ago.

Starting with a terrific opening line - ‘The Marshes rotted in their house two full days before they were discovered by a delivery man from Sparkletts’ - this short-novel (only 166 pages) doesn’t disappoint or let up at all.  It’s told in first person by Charles Ripley, who’s a wonderfully realised character and very easy to side with, especially when the book later takes several odd turns and he struggles to figure out what’s going on and how he fits into things.

The characterisation is good across the board - from Shelly Ripley, trying to recover from a miscarriage and Sybil Marsh, a vamp in every sense of the word to the minor characters, neighbours in the development who are given enough heft that you care and empathise with them - and none more so than Ruskin Marsh himself.  He’s a superb character, a high-flying lawyer by day and voracious sexual adventurer all the time (his wife, others wives, random women he picks up, ladies he takes off other characters hands), an aesthete, purveyor of high quality drugs and a lover of guns.  Ruskin belongs to an exclusive club he calls the ‘Society of Friends’ who appear to take their life philiosophy from De Sade’s Juliette or the Fortunes of Vice and when he hands a copy to Ripley (notably a translated version, which apparently doesn’t exist), Charles’ life begins to turn, with his attitude towards a woman at work who fancies him becomes much darker until she too is in mortal peril.

With some terrific set-pieces - the two women from the bar who drive off the road, meeting Angela in a funky restaurant, the skinny-dipping, the illegal alien being tortured to death in the valley that we only hear, rather than see - and a great sense of location - both the Mesa Vista estate and San Diego in general - this is assured and accomplished and a real page turner.

Told with good pace from the beginning, once the whole story starts to emerge - it’s alluded to in the blurb, but is much bigger - the book takes several shifts in tone until Ripley is forced into a position where he has nothing to lose and it ends as intense and bleak as it began.

A great little novel, told with style and wit and an eye for gruesome detail, this is well worth a read and I’d highly recommend it.

Note - It’s also nice to read a book from the late 80s, a period of time I remember vividly, where characters are excited about home computers, large screen TVs and Atari systems.


* * * * *
The book was originally published in hardback by St. Martins Press but I can't find any information on Eric C. Higgs anywhere online.  He did publish one other novel, "Doppelganger" (as Eric Higgs) via St Martin's Press in paperback in 1987 but that appears to be it.  I know it's a long-shot but if you're reading this and you some details of him, let me know would you? 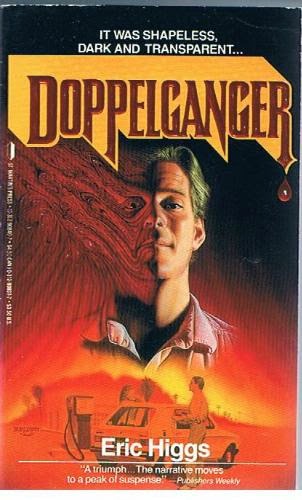 I picked up a 2nd hand copy of "Doppelganger" in 2011 (from a Cats Protection League charity table for the princely sum of 50p) and read it that same year.  This was my review at that time:
Marvin Moy is one of life’s losers, a big kind-hearted bloke for whom absolutely nothing goes right.  He also has a secret, an ability to see things in daydreams that are actually happening in real-life.  A girl he fancies is being hit on by her professor and Marvin dreams of beating the man up, only to then have the girl identify him as the attacker - even though he was miles away when the assault took place.  This draws him to the attention of the police and from there, things go from bad to worse - car accidents, a garage blowing up - whilst, at the same time, he starts a tentative relationship with Kathryn, the manager of his apartment buildings.

Published in 1987, this is the second novel - and last too, it would appear - from Eric Higgs and keeps up a brisk pace all the way through.  Higgs has plenty of ideas and good grasp of imagery and the relationship he paints, between Marvin and Kathryn is both delicately charming and sensuous.  Marvin is easy to like, being the butt of everyone else’s anger and annoyance, but as things get worse you begin to wish he’d stand up for himself and that, in effect, is what his doppelganger is doing.  Having said that, we get no sense at any point of the reasoning behind the doppelganger, where it came from, why it’s here, why it doesn’t help Marvin more and I felt like I wanted more of an answer.  In place of that, we have a great kick-in-the-face denouement, which is quite startling.  Not bad at all, worth a read.