What Gets Left Behind is shortlisted... 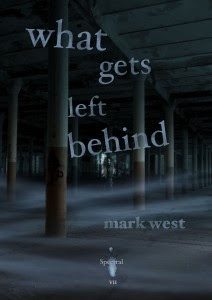 "What Gets Left Behind", my chapbook from Spectral Press (and many thanks must go to Simon Marshall Jones for his faith in it and me), was released in October but had already sold out four months prior to that.

It's not for me to say if it's a good story - I like it a lot, obviously and it touches on themes I'm interested in pursuing, such as old friendships, nostalgia and father/son interaction - but I can say it's picked up some of the best reviews I've ever received.

All of that has been raised another level today, as it's been shortlisted in the Short Fiction Of The Year category of the This Is Horror Awards.

I'm genuinely thrilled and chuffed about this and touched that people have thought enough of Mike and Geoff and the Rainy Day Abductor to nominate me.

Full details here on the This Is Horror site
Posted by Mark West at 12:03:00