The Millennium Falcon And Me

On February 11th 2011, I wrote a blog post (linked here) where I talked about the nostalgic fix that you can get from old, childhood toys.

Whilst I am nostalgic, I do very much appreciate the times that I live in because through the wonders of eBay and little retro toyshops (such as the one I use, The Leicester Vintage & Old Toy Shop), I’ve been able to piece together bits of my childhood that had disappeared in the sands of time or through passing down to various cousins.  I now have almost the entire collection of Three Investigator books, for example, in the early 80s Armada editions (I just need TheSecret Of Skeleton Island now) and I now have a (vintage) Stormtrooper army (something I didn’t have as a child but always wanted). 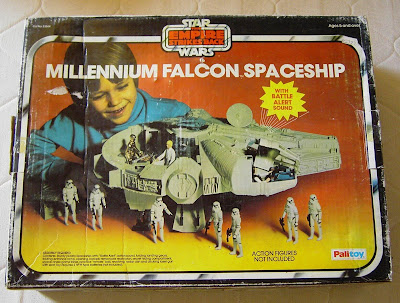 Dude & I were in on Saturday and we called into the shop, as we always do when we’re in town.  We wandered around, checking the shelves and then I spotted a Palitoy Millennium Falcon.  The Millennium Falcon!  I really wanted one of those when I was 9 but never got one and although I’d seen them around in the past, at toy fairs and the Memorabilia at the NEC, I’d always been struck by two things - a) they’re expensive and b) where the hell would I put it?  Standing next to the Falcon was an AT-ST Walker that Dude said he would like, to go along with the one I already have.  I pondered his request, whilst he & I checked out this Falcon (which wasn’t cheap, but was nowhere near as dear as most you see) and it suddenly occurred to me - if I didn’t buy it, I’d probably regret it.  So I did and Dude & I walked back to the car, a pair of excitable kids and I wondered just what Alison would make of it (her response - “very nice, where are you going to put it?”). 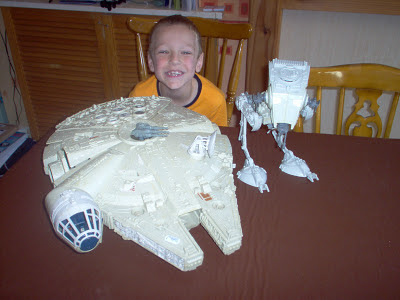 The purchase gave us the excuse to get the old Star Wars toys out (I gave Dude all of the ones I bought in the late 90s, when the films were re-issued), we watched some of the films and had a great time.  Yesterday afternoon, we set up camp on the patio table with a toothbrush each and a bowl of hot water (with Ariel washing liquid) and scrubbed the Falcon until it shone.  We’ve done the outside and the removable parts, the inside and underside are on for next weekend and it looks good. 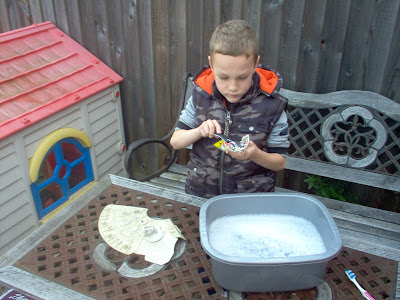 Last night, as I put Dude to bed, he asked if the Falcon was mine, or ours.  I told him it was for both of us, that if he ever wanted to play with it, he could do.  You see, as much as I love it and as much as it means something to me as a relic from my childhood, it’s not designed to sit on a shelf somewhere gathering dust.  It’s a toy, a hark back to an age where you saw the film at the cinema and then recreated the action with the toys rather than video games - it’s supposed to be played with.