Two things - and if you don't have kids, you can probably safely skip this entry.

"The Bureau Of Lost Children", the short story I finished last week (which will hopefully appear in "ill at ease2" later this year) concerns a missing child. It wasn't particularly difficult to write but, on reading it back, I found I'd transferred a lot of my own worries and fears - about Matthew and taking care of him and making sure that he's safe - into the text and realised that it was a lot darker than I'd originally intended.

At the moment, The Dude is heavily into Pokemon and he knows plenty on the subject (I joked to my parents, after he'd patiently explained to them what evolution of what character this other one was, that he knew more about Pokemon than I know about anything, in the world, ever). He likes to talk about it too and, whilst I can't keep up with the names (though I do like the phoning-it-in styling of the character "Far Fetch'd"), I do show an interest. I thought that was just about being a good Dad, but then I saw this posted on Facebook (written by Catherine M Wallace) and realised I might be doing something right after all.

So here are the wise words. 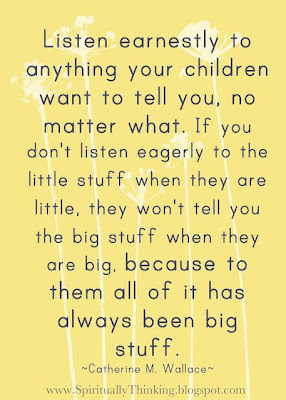