An afternoon in Paris - and lovelocks

I had to go to Paris today with my work colleague, Rosie - we had a business meeting there and managed to get everything tied up by lunchtime. After taking our Parisian contact out for a very nice meal, we caught the train (a double-decker carriage - British train companies, please take note) and got off at Saint Michel. After a quick refreshment stop at a café across from the Notre Dame cathedral, we walked down along the Seine (where we saw some wonderful stalls, with people selling paperbacks and art and some of it looked great - I wish I could read French) and decided to head over to the Louvre. 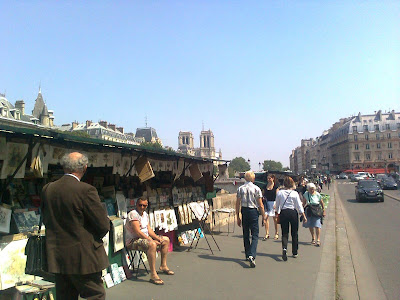 There’s a bridge that links the Quai de Conti to the Quai des Tuileries (where the Louvre is), called the Ponts des Arts. There was something on the bridge fencing, which neither Rosie or I could figure out, so we went to have a look. They were padlocks, with names (and often dates) written on them. 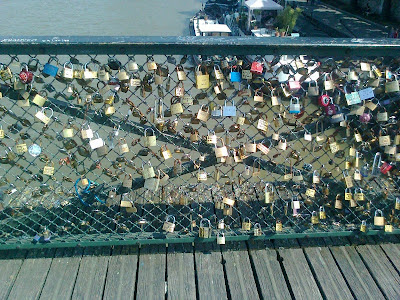 I checked it tonight, on Wikipedia and the story behind them is lovely.

Love padlocks have existed for quite some time, though there are no certain sources for their origin. They are a custom by which padlocks are affixed to a fence, gate, bridge or similar public fixture by sweethearts to symbolize their everlasting love.

In Paris Town Hall in May 2010 [there was] expressed concern over the growing number of love-locks on the Pont des Arts bridge, stating: "they raise problems for the preservation of our architectural heritage". Lovelocks disappeared suddenly in 2010, but the Administration denied responsibility and they soon re-appeared.

Quoted from - http://en.wikipedia.org/wiki/Love_padlocks
Posted by Mark West at 23:51:00