Something I like to utilise a lot in my fiction is a sense of place - I believe that if you can make the location as realistic as possible, you can do pretty much whatever else you want and still keep the reader onside. To that end, most places in my stories are based extensively on real life.

Take “The Mill”, as an example (because I have photographs to illustrate this point - my mother didn’t raise a complete idiot). It’s all set in Gaffney, but the locations used are spread over Rothwell and Kettering, from the bereavement group meeting house (the Melton Road Community Centre, where my first writers group met), the café (on Newland Street) and Saskia’s house (my friend Pauline’s house) - all in Kettering, with Rothwell represented by The Mill itself (and if you take a walk down Shotwell Mill Lane, to the north of the town, there you will find the remains as described in the story). I don’t know what the mill was used for originally, or when it closed down, but it was long gone when I was kid, back in the late 70s/early 80s and we used to play war down there.

We went out for a walk on Sunday afternoon and followed some footpaths and ended up there. The last time I’d been down, a couple of years before I wrote the story, it was all overgrown and virtually impossible to get into. It’s still overgrown in parts now, but much more accessible so I took some pictures of the cellars as they are today. The memory I wrote from had no trees growing through the cellar floors, or grass to the brick edgings, which is why they don’t appear in “The Mill”.

So here they are, with Dude in place to give a sense of scale. 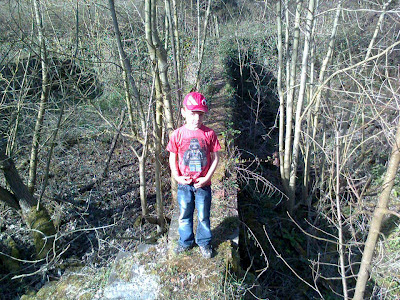 Matthew, standing on the "walkway" between the middle and right cellar. 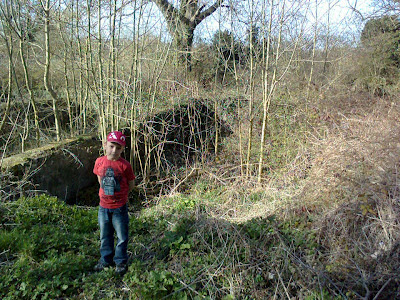 Matthew, standing in front of the right cellar. The cellar on the far left was virtually impossible to reach.
Posted by Mark West at 15:36:00

Email ThisBlogThis!Share to TwitterShare to FacebookShare to Pinterest
Labels: locations, pictures, the mill