Yes, it’s done! The 2nd draft is now complete, at 47,219 words (yes, it went a little long on my proposed target of 35,000 - I hope Steve Bacon isn’t too annoyed with me!) and I’ve already sent out a couple of pre-reader copies. I’ll leave it to sit for a while (I was 47 days on the 1st draft and 10 on the second, so I can’t see the wood for the trees now) and then read it to Alison and collate all the notes before cracking on with draft 3.

Here’s a rough synopsis of the tale, that I included in the pre-readers letter:

Gabriel Bird is a private investigator from Gaffney who is hired to find an exploitation film-maker from the seventies called Roger Sinclair. There’s also a problem with the last film he made, his magnum opus, which seems to have a peculiar effect on those who watch it. The trail leads Bird to Oxford and Bedford, back to Gaffney and then to Heyton, an east coast seaside resort. Along the way, people tell lies and die and as Gabriel gets closer to the truth, it seems like everything he’s ever known and believed in is about to crumble around him.

I’m obviously thrilled to be at this point - the idea has been around for a little while, but it was talking with Steve Bacon that gave me the impetus to crack on with it and I’ve really enjoyed the process. There was quite a bit of research involved - both in terms of exploitation films and also the voice, which explains why I’ve read more crime thrillers this year than anything else - but it was all great fun and I loved weaving true facts into the fictional ones I was littering the manuscript with.

Next up, I’m going to read through the first Spectral Press chapbook (“What They Hear In The Dark”, by Gary McMahon) with a view to writing my entry to the series. That will take me, I imagine, over Christmas and perhaps into the New Year and then who knows? There’s still the Lost Film to complete, the proper collab with Steve Bacon, the top secret sleaze project and my “Shine” novel, which I’m determined to get going on.

It’s all go here and I love it! 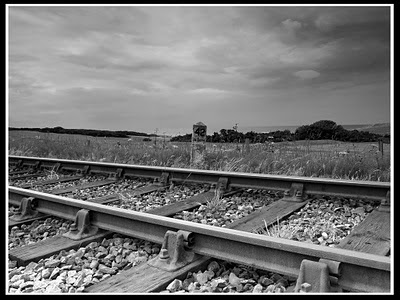 “Parallel Lines”, by Gerry Balding
(from his photo-stream on Flickr here)

I’ve used this photograph because there’s a place in the fens, where the river Heyt runs close to the railway, that means an awful lot to the characters in this book - and nothing pleasant happens to any of them there!
Posted by Mark West at 16:13:00