After attending many Con’s in the past, only for the Saturday, I decided to push the boat out a bit and stay for the weekend. And I’m really glad I did. I caught the train up and found my hotel, the Plaza, immediately (and thank you so much to Mick Curtis & Gary Cole-Wilkin for suggesting it - lovely room, plenty of space, very close to the Con itself).

So much happened, it’s going to be impossible to try and create a decent blog post so I’ll go with the bullet point method:

Friday
* Got signed in, chatted with Martin Roberts (cool haircut) and Helen Hopley. Bumped into Stu Young and Peter Mark May (the first of many new friends, who I’d already conversed with through Facebook). Had my afternoon planned out, which readings I was going to go to, which panels, all sorted.
* Convened in the bar, met Mick & Debbie Curtis and Gary Cole-Wilkin & Soozy Marjoram (all good people) from the RCMB. Also met Simon Marshall-Jones (SMJ from hereon) - we’d been saying it felt like ages since we last met up, but it was Terror Scribes in July. How times flies. Also met the lovely Raven Dane and Pixie Pants - wonderful ladies.
* Went out for dinner - Zizzi’s, very nice, very expensive - with Stu Young, Pam Creais and Lilly (don’t know her surname, unfortunately). Due to the extraordinary length of time they took to serve us, managed to miss Simon Bestwick and Peter Mark May’s readings. Whoops! On the plus side, Stu gave me two books he’d picked up in local charity shops, a Jesse Stone hardcover (Stu & I love Robert B Parker and often end up talking about him, when we meet and on email too) and a Robert Crais.
* Back to the hotel, met more people, went to the Quiz (our team was bolstered by the wonderful Jay Eales - recovering from graphic dental work that he kept trying to tell me about - and Selina Lock) and two chaps I never really caught the name of. The quiz was tough (seriously, who knows that much about the bloody Transformers) and we came last, though there were only about 6 points between us and the winners.
* “Get Real” panel, which I attended with Stu.
* Back at the bar, meeting and chatting. Called it a night at just after midnight, then was kept up until 3am by the shrieking of Nottingham night-life-folk on the main road outside my hotel.

Saturday
* Up good and early, checked out the hotel breakfast. Decided £16 was too steep, walked around to Greggs and got a croissant. On the way, I bumped in Gary Greenwood, we had a chat and agreed to meet up later. Determined to have a more pro-active approach to the readings and, for the most part, managed it. In fact, the lift (or ready lack thereof) scuppered me more than anything else. So what did I do today?
* Met Gary and Emily McMahon on the way into the hotel. Had a nice chat, talking about awards and work and families. Stu Young came by, gave Gary a copy of “The Godwulf Manuscript”, which he & I have been raving over and which Gary wanted to read.
* Andrew Hook’s reading was great fun, included the penguin head and I got to ask him some questions at the end.
* Gary McMahon’s reading was equally good. I’m very lucky, I’ve pre-read “Pretty Little Dead Things” (an ARC of which appeared over the weekend) but it was great to hear it in Gary’s own voice.
* To the bar, where I met up with Paul and Cath Finch, David Price, Simon Unsworth, the McMahon’s and Shaun Hamilton, who I originally met in Fiction Factory. We took some photo’s. I also finally got to meet, face-to-face, Stephen Bacon. Steve & I have been corresponding for a while now and we’re working on a collaborative project together, but it was great to shake his hand. His wife, the lovely Andrea, had come along for the day with him and it was great to meet her too. I only hope she didn’t get too bored! 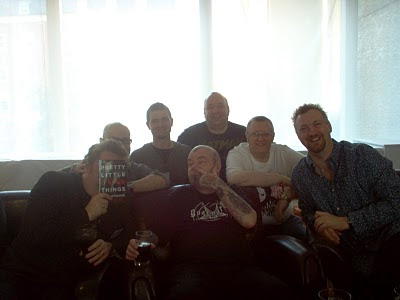 * Caught Paul Meloy’s reading and I’m glad I did. The story was incredibly moving, written (and read) with power and very affecting. I’ve never been disappointed by Meloy and this was no exception.
* Went to lunch at the Java café with Dave Price and SMJ. By the counter, at a small table, were Stephen Volk, Tim Lebbon and Mark Morris, who all said hi. Stood behind Jonathan Oliver in the queue and the lady behind the counter asked what we were all doing. We explained about the Con and that we were writers. She asked if any of us were famous. As one, we all turned and pointed at Steve Volk.
* Steve & Andrea Bacon joined us for lunch and he & I talked over our collaboration project. I’ve got a good feeling about it.
* “End Of The Line” launch - picked up my copy, got a signature from everyone who was there. When I got to Conrad, shook his hand and thanked him for the confidence burst that FicFac had given me. He’s a gracious man, that Williams.
* Paul Finch’s reading was good, though I only caught the tail end because of the launch and the bloody lifts.
* “The Grass Is Greener” panel. I went in on my own, interested to hear about moving genres (I’m not leaving horror, but my Lost Film novella is functionally a crime story, told in that voice and I’ve been reading a lot of crime lately to absorb it). Paul Meloy came in and joined me. Good panel, very interesting.
* Paul & I have a chat in the reception area, about brands. Decide that it’s all about the writing. He goes to the dealers room, I head up to Ian Whates’ reading. Once again, foiled by the lift but I catch at least 20 minutes. Ian runs the Writers Group I’ve recently joined and it was great to hear him read aloud, even better that he finished early and so I got to ask some questions.
* Back to the bar, where I meet up with John B Ford, who has dropped in for a while and Alison Davies. I haven’t seen either of them for years but, quite literally, it’s as if no time had gone by. John looked good and, despite his dreadful last few years, was upbeat. Let’s hope this isn’t the last Con we see him at.
* “How Not To Get Published” panel, which I’d been really looking forward to but, to my mind, didn’t work at all - it got quite snide, I thought, so I left. Managed to meet up with Jonathan Oliver for a chat a little later, as I wanted to ask him how he liked his novel pitches.
* Back to the bar, for more chat, then SMJ collared me and we sat down with Adrian Chamberlin. The three of us - and Mark Deniz - are working on a 4-writer-collection and we batted some ideas back and forth. One of them, in two parts, was really quite exciting!
* The RCMB Curry trip, wonderfully organised - as ever - by Gary Cole-Wilkin and Soozy Marjoram (and a terrific job they do, I organised a “thank you” round of applause when we finished). We were rounded up, led down, seated and eating really quickly - conversation was loud and passionate and funny and the meal was terrific. Attending were: Paul & Cath Finch, John Travis, Charles Rudkin, Ally Bird, Simon Unsworth, Terry Grimwood, Daniele Sierra, SMJ, Joel Lane, Simon Bestwick, GCW, Soozy, Shaun Hamilton, Mick & Deb Curtis, me, Gary & Emily McMahon, Chris Teague and Gary Fry. Great fun.
* Back to the Brittania and into the awards. Neil Bond and Donna Scott, from my Writers Group, had saved me a place at their table for the event and I didn’t realise, until too late, that I was sharing it with David Riley and Sharon Ring. Wish I’d known at the time, I’d have introduced myself! The awards were good (I wish Selina Lock had won for ‘Girly comic’ but Neil Gaiman - who he? - is, I suppose, a big draw) and Conrad William’s acceptance speech for “One” was about the most moving I’d heard since Tim Lebbon’s last year. Fantastic stuff and I made a point to go and congratulate him and Sarah Pinborough before the evening dispersed everyone.
* Back to the bar. More chat.
* Into the small bar, for the Pan book launch. It was held back by another event running late, so Peter Mark May & I stood chatting with John Forth and his partner Esther Sherman. We chatted about many things, but “Piranha 3D” got a good airing - it’s important, I think, to find folk who share your belief that a 3D film full of boobs can only be a good thing! Great fun, great couple and I really hope that Esther’s promise of a horror-Burlesque performance comes off.
* The Pan Launch was fabulous, helped in no small part by Johnny Mains’ enthusiasm and John L Probert’s incredible oratory skills.
* Back to the bar, more catching up with people (including Matthew F Riley), then back to the Plaza to listen to the Nottingham harpies. 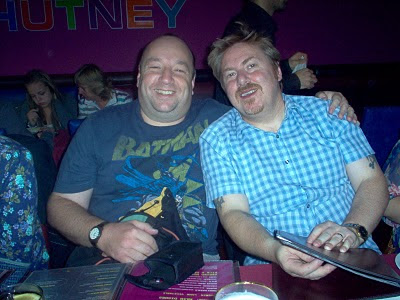 Gary McMahon & I at Chutney's, for the curry

Sunday
I admit, I chickened out. I got a text from Mick Curtis, wishing me a safe journey and decided to head straight for the train station and my pre-bought ticket and reserved seat. If I’d stepped back into the hotel, I’d still be there, I think.

This was a fabulous con, brilliantly organised and run and I had a whale of time! Roll on the next one!

Email ThisBlogThis!Share to TwitterShare to FacebookShare to Pinterest
Labels: fantasycon