The fifth in an occasional thread celebrating old-school paperback novelisations from the 70s and 80s, which are now mostly forgotten.  We're not talking great art but these books have their place - they were a fantastic resource from a time when you couldn't watch your favourite film or TV show whenever you felt like it - and I think they deserve to be remembered.

This time, I'm looking at Dead & Buried, by Chelsea Quinn Yarbro, adapted from one of my favourite horror films of the 80s, which was released 40 years ago. 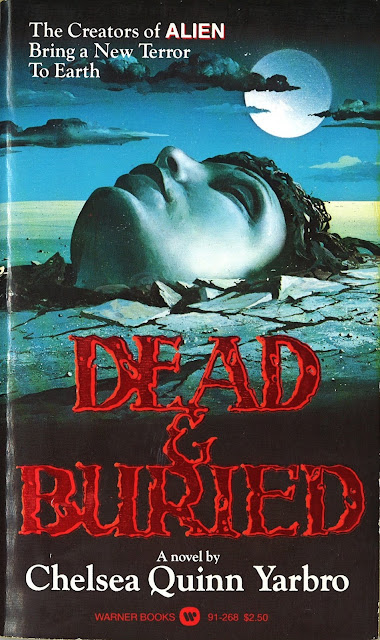 The coastal town of Potter’s Bluff is small, insular and friendly, where everyone knows everyone else’s business and outsiders are easy to spot.  So when dead bodies start to turn up - burned beyond recognition - Sheriff Dan Gillis doesn’t have a great deal to go on, except that his wife seems to be tied up in it.  As the threads of his investigation start to come together, he realises his neighbours might not be everything he’d thought they were…

Based on the screenplay to the excellent film - though not, it appears, the shooting script - this is a decent attempt to create a suspenseful novel from a story that, I think, works best visually.  In the film, we see the characters and get a sense of the almost surreal nature of what’s happening, while Yarbro is forced to explain bits and pieces that don’t really work once they’re laid out.  Having said that, she writes well and the pace clatters along, with Dan taking the lion’s share of the POV - Janet, his wife, gets short-changed the most unfortunately, while others characters seem there purely to serve the plot.  The suspense set-pieces - such as the out-of-town family pursued through a deserted house - are very well done and there’s a nice creepy sense over the piece, that lingers well into the last quarter where everything appears to turn on its head (no spoilers here).  With a great eye for location - a small town with lots of sea mist - and atmosphere to spare, this is a worthy companion to the film (different enough to make it an interesting and intriguing read in its own right) and if you liked the movie, I’d very much recommend this. 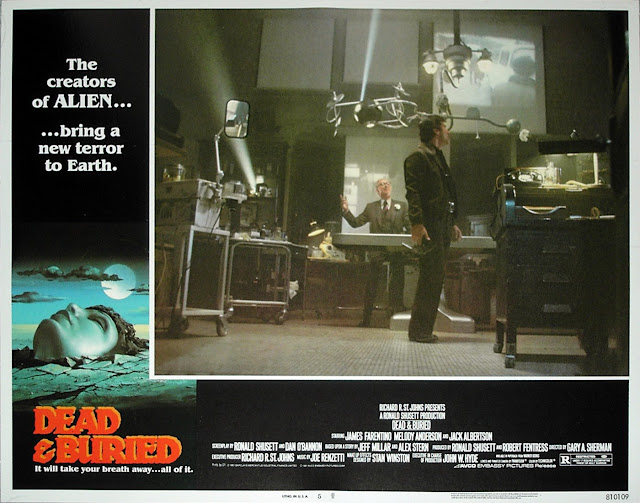 Dead & Buried was released in 1981 (shown uncut, it received an X-certificate at the cinema but somehow ended up caught in the initial sweep of Video Nasties in 1983, the EMI video only being dropped from the list in January 1985), though I didn’t catch it until 1985, when I watched it with friends on Betamax.

At the time, I was intrigued by the cover art (the same as the poster and book), the taglines - “The writers of Alien bring a new terror to earth” and “A new dimension in horror” - and the link with Alien as well as the actors (I knew Melody Anderson from Flash Gordon and James Farentino from Blue Thunder).

Directed by Gary Sherman (it would be some years before I got to see his Deathline, which I also loved - “Mind the doors!”), the screenplay was written by Ron Shusett and Dan O’Bannon, based on one by Jeff Millar & Alex Stern but changed enough the original writers only got a ‘story by’ credit.

The film works very well, though it was beset by behind-the-scenes problems with the production company from the start and Sherman’s directors cut - he was  aiming for a more black comedy type feel - was apparently destroyed.  Interestingly, the problems with the production company led to a wait for the films distribution which meant the novelisation was released first.  A 'surprising success'*, its popularity meant 'many people presumably thought the film was actually based on the novel, rather than vice versa'.

Aside from the excellent set direction and strong acting, the excellent make-up effects from Stan Winston were a major draw for me, especially in the hitchhiker sequence where Winston performed the hands close-ups in place of the actor.  He utilised a lot of puppet work to up the gruesome factor and one scene in particular, featuring a nurse and patient, had us teens howling as we watched it (ocular trauma with a needle) and years later, even after the effect had been explained to me, I couldn’t watch it without wincing.  In fact, Winston’s excellent work only serves to highlight the problems, where the production company brought in a less competent team to create an acid effect that’s so bad you want the camera to cut away out of embarrassment, rather than fright.

It does have its downsides, of course but it remains creepy and effective, a genuinely good horror film that really does make you wish they still made them like this today. If you get a chance to see it, I would urge you to do so. 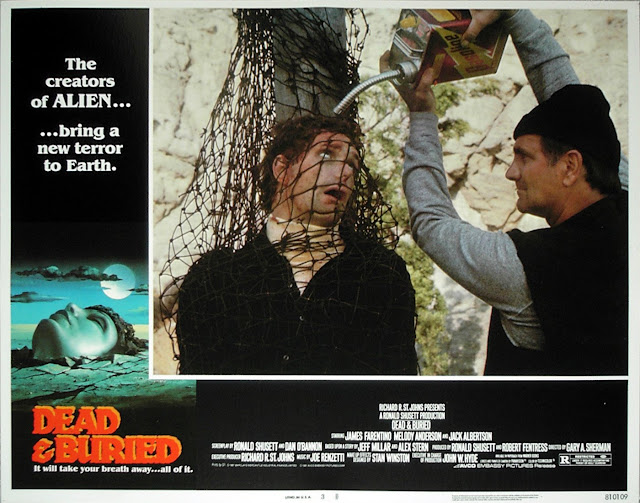 * quotes taken from the liner notes of the Anchor Bay DVD

* * *
Chelsea Quinn Yarbro was born on 15th September 1942) in Berkeley, California and attended San Francisco State College (now University).  She began writing professionally in 1961 as a playwright for a children's theatre company and switched to writing stories in the mid-60s.  Perhaps best known for the Count Saint-Germain novels, she has worked in a wide range of genres, from science fiction to westerns, young adult adventure to historical horror.

A ‘skeptical occultist’ for more than forty years, she’s been honoured by the Transylvanian Society of Dracula (the 1997 literary knighthood), the World Horror Association (2003 Grand Master), as a ‘Living Legend’ by the International Horror Guild and won Life Achievement Awards from the Horror Writers Association (in 2009) and the World Fantasy Convention (in 2014).

More details can be found at her website here 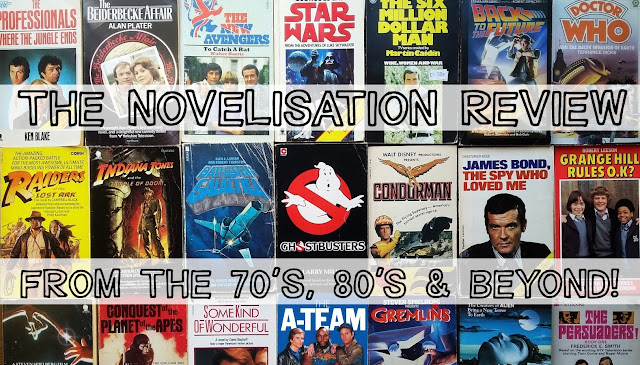