Since Alison & I generally have what we want (in terms of books, music and clothes), buying for Christmas and birthdays is sometimes an issue.  This year, we made the decision to get our own presents then hand the gift over to the other - to that end, I ’bought’ her a Fitbit, she ‘bought’ me a Funko Hannibal Smith figure.  However, she also got me a surprise present - she saw it, decided I’d love it and bought it.  And she was absolutely right, I did love it. 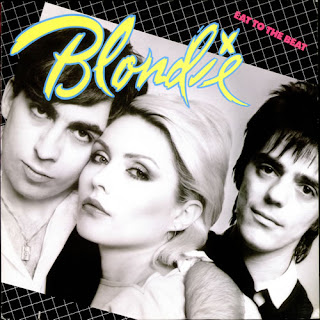 I’ve been a fan of music for a long time but, aside from my parents choices, my first real memories come from 1977/78 (when I’d have been 8 or 9) and falling in love with songs that still sound as vibrant and exciting today.  The first cassette album I bought (I only had a tape recorder) was The Best Of Blondie (you won’t be surprised to learn I still have it, just no means of playing it) while my first vinyl LP came in 1980 when my lovely parents not only bought me my first record player (I can’t find a picture of it anywhere but I’m convinced it would have been a Bush unit) and my first album - Eat To The Beat by Blondie.

After this, I became an avid listener and through the early 80s I bought plenty of singles and the occasional album too.  Back then, certainly locally, the market wasn’t cornered by the chain stores so I had plenty of choice for shops - Revolver Records in Kettering (as well as Our Price, a fair while before it was swallowed up by Virgin), Spinadisc in Northampton and Discovery Records in Corby and Market Harborough.  In the mid-80s, my friend Craig introduced me to Boogaloo Records in Leicester, a fantastic second-hand place from where I picked up no end of great late 70s/early 80s albums I couldn’t find anywhere else (most of my Donna Summer collection came from there).

By then, I’d upgraded my stereo to that must-have 80s item, the midi hi-fi system where I could tape albums to play on my Walkman, listen to the radio and fiddle about with the graphic equaliser, without properly understanding what it did.  CDs were already making inroads then but I resisted them for as long as possible - I had a big record collection and wasn’t keen on replacing it - but finally caved in the early 90s when the units were so ridiculously cheap (X, by INXS, was the first album I owned on both vinyl and disc).  I remained a huge fan of the LP but as the years went by and vinyl was phased out, I didn’t have a great deal of choice.  When we upgraded in the 00's, Alison & I bought a system that didn't have a turntable and, in a move I now despair of my mid-thirtysomething self doing, I gave away a lot of that vinyl.

What an idiot, is the first thing that springs to mind, as I look at my new record player.

As luck would have it, since Dude was born (and even though I had no way to play them), I’ve been picking up the odd album or single over the years (my original collection is buried in the understairs cupboard somewhere, untouched for over a decade and we’ll need to mount an expedition to find it)  so I had stuff to play on Christmas Day.  Most of it came from charity shops, albums I’d wanted back in the day but couldn’t find, stuff that caught my eye in the moment or, even, things I picked up because I’m a compulsive completist - “Yay, an INXS album!”.  I also discovered (on a post-Christmas trip to Leicester to spend our gift vouchers) that HMV now has a huge vinyl selection - I also discovered brand new vinyl has a huge price tag too but that's okay, I’m a collector and I don’t have a problem with second-hand.

The vinyl revival?  Oh yes, I’m definitely in - and here's part of the charm for those who've never experienced it...

Even better, while flicking around on ebay, I discovered these existed - I always knew soundtrack albums were a thing, obviously, but singles?  Did these theme tunes, from some of my favourite TV shows, really plan to mount a number one bid on the pop charts of the day? 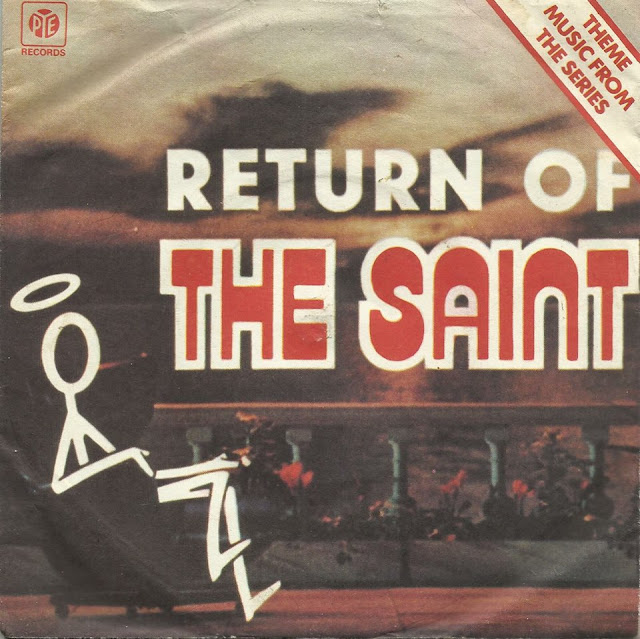 Composed by Brian Dee & Irving Martin, this was produced by Martin and Funko was the b side track.  It was released by Pye Records on 22nd September 1978 and I really wish I'd known it existed, I love this theme tune.

And for those who don't remember, this is what it sounded like... 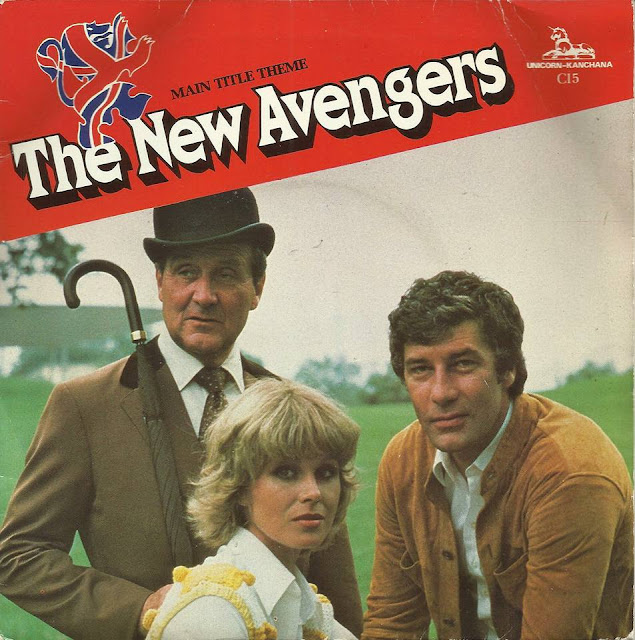 Broadcast during 1976 and 1977, I have very hazy memories of this (I was only seven when it started) but I do remember liking Purdey and thinking Mike Gambit was very cool.  I thought he was less cool when Gareth Hunt began advertising coffee on TV though.  The theme tune was composed and conducted by Laurie Johnson and released in 1976 on the Unicorn-Kanchana label. 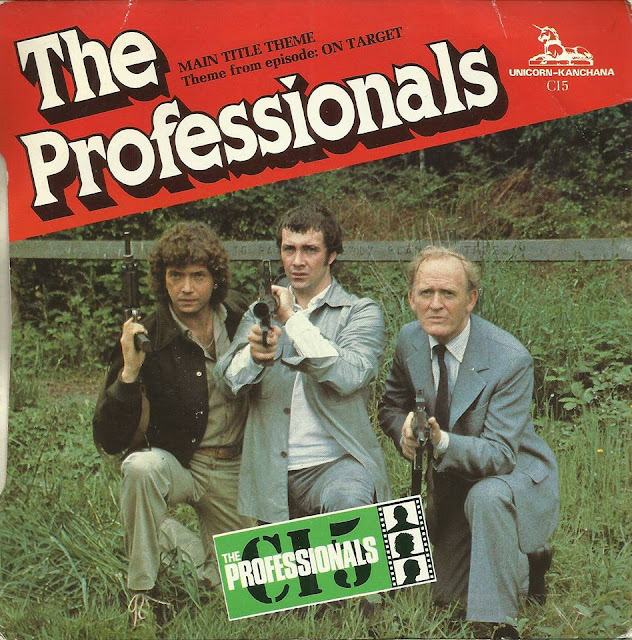 I loved this show which, bearing in mind it's 9pm timeslot, wasn't particularly aimed at kids though Corgi did a nice line of toy cars of Bodie's Capri and Grandreams published 7 annuals.  The (excellent) theme tune was once again composed and conducted by Laurie Johnson and released in 1980 on the Unicorn-Kanchana label.

Happy listening, whatever your preferred medium...