Frenzy, Sir Alfred Hitchcock’s 52nd film as director, opened in the UK on 25th May 1972.  It was produced by William Hill, written by Anthony Shaffer (from the novel by Arthur La Bern) and the director of photography was Gil Taylor.  Syd Cain was the production designer, Albert Whitlock supervised the visual effects and John Jympson was the editor. 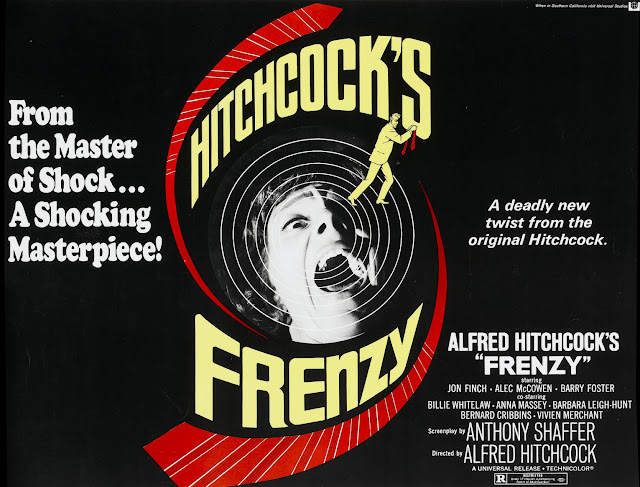 After the brutal murder of his ex-wife, down-on-his luck former RAF pilot Richard Blaney is suspected of being the ‘Neck Tie Murderer’, a vicious serial killer terrorising London. With the help of his friends, Blaney goes on the run, determined to prove his innocence.

In 1970, looking for a new project after Topaz (1969), Sir Alfred Hitchcock was given a copy of Goodbye Piccadilly, Farewell Leicester Square by Arthur La Bern and he later told journalist Rebecca Morehouse “I was attracted by the market [scenes] and by the central figure, an Air Force man who is always a loser. Today is the day of the non-hero, isn't it?”  Excited by the novel and its location, he pitched it to Lew Wasserman and Edd Henry at Universal over a lunchtime meeting and they agreed to make it, on a $2.8m budget.

Hitchcock decided it would be best to make the film in London with an all-British cast and rang playwright Anthony Shaffer, whose Sleuth was then a hit on Broadway, to ask him to adapt the novel.  After Shaffer (who originally thought the call was from friends playing a joke) agreed, the two men met in New York in January 1971 to discuss the adaption, before going to London to scout locations, looking over Hyde Park, Leicester Square, Piccadilly, Oxford Street, Bayswater, Hammersmith and Covent Garden Market.

The script meetings continued throughout February and several parts of the novel were cut back, such as the court scenes, or excised altogether, such as Blaney's escape to France.  In addition, Hitchcock insisted on using phrases from his childhood (spent in London), as Shaffer explained to Donald Spoto, “[he] was intractable about not modernising the dialogue of the picture, and he kept inserting antique phrases I knew would cause the British public a hearty laugh or even some annoyance.”

The downbeat ending of the book was changed to a more satisfying conclusion and Hitchcock and Shaffer added a recurring theme of food, along with biblical references to the Garden of Eden and Original Sin. The part of Chief Inspector Oxford was also enhanced and light relief added during mealtime scenes with his haute cuisine interested wife who was busy carrying out culinary experiments.  Although Shaffer wrote the screenplay on his own, which was completed well before filming began, Hitchcock had a firm idea of where he wanted the story to go and co-wrote the 55-page treatment the 160-page script was based on.
Casting for actors and crew began in May and Hitchcock renewed some old professional acquaintances.  Cinematographer Gil Taylor had been clapper-boy on Number Seventeen (1932), sound mixer Peter Handford worked on Under Capricorn (1949) and Elsie Randolph (who plays Gladys the hotel clerk) had appeared in East Of Shanghai (1931).

Hitchcock cast seasoned British actors for the other roles, recognised in the UK but relatively unknown in Hollywood at the time.  Alec McCowen (Chief Inspector Oxford), Barry Foster (Bob Rusk), Billie Whitelaw (Hetty Porter), Anna Massey (Barbara Milligan), Vivien Merchant (Mrs Oxford) and Barbara Leigh-Hunt (as Brenda Blaney) from the stage were joined by TV stars Bernard Cribbens (Felix Forsythe), Michael Bates (Sergeant Spearman), Clive Swift (Johnny Porter) and Jean Marsh (Monica Barling).  As he had with Psycho (1960), where Norman Bates is much older than Anthony Perkins, Hitchcock cast the much younger Jon Finch as the anti-hero Richard Blaney (who, named Blarney, is nearly fifty in the novel) though when he later openly criticised the script to journalists, Hitchcock was close to recasting.  He wanted Michael Caine for the Rusk role but the actor turned it down (“I don’t want to be associated with the part”) - Hitchcock had seen both Foster and Billie Whitelaw in Twisted Nerve (1968).
With regard to the look, Hitchcock told Gil Taylor he wanted “a realistic nightmare, rather than a ‘Hammer Horror’” with Covent Garden as the backdrop, referring back to a selection of Vermeer paintings.  The son of a Covent Garden merchant, Hitchcock was keen to film at the market and, perhaps aware its working days were numbered (it remains a thriving tourist part of London today), to document it too.

Hitchcock’s wife, Alma, had flown to London intending to spend a few weeks in England before embarking on a European tour with their daughter Patricia and granddaughter Mary.  After a weekend break to Scotland, Alma suffered a serious stroke and was treated at Claridge’s Hotel by Hitchcock’s personal physician.  She recovered enough to watch dailies with her husband and Barry Foster said later that Hitchcock awaited her reaction “like a schoolboy, showing his homework to the teacher.” Alma flew home to Los Angeles in October to receive further treatment.
Filming began in the last week of July 1971 with assistant director Colin Brewer heading the second unit, as well as handling many of the first unit set-ups for Hitchcock, who was suffering badly with arthritis.
Filming progressed smoothly and though a lot of the exteriors were filmed around Covent Garden, plenty of other London locations were utilised including Tower Bridge and County Hall (for the opening sequence), the Coburg Hotel on Bayswater Road, Hyde Park and the London Hilton on Park Lane.  Brenda Blaney’s flat is in Ennismore Gardens Mews and her matrimonial agency is at Dryden Chambers (since demolished), just off Oxford Street.  Filming also took place at New Scotland Yard, Wormwood Scrubs and St Mary Abbot’s hospital and the production was granted permission to film inside the Old Bailey the first full weekend in August.  The interiors were filmed at Pinewood Studios, with sets often on stand-by to serve as ‘weather cover’.

Hitchcock puts in his traditional cameo appearance during the opening scene at County Hall, where he’s in the middle of the crowd wearing a bowler hat.  Teaser trailers showed his dummy floating in the River Thames.

The final three weeks of filming were taken up with the complex sequence on the potato truck and principal photography ended after thirteen weeks on 14th October, though the second-unit worked for another week.

The celebrated tracking shot out of Rusk's flat, which is as stunning now as it was then, was filmed using a camera dolly since the steadicam wouldn’t be invented for a couple of years.  The interior was filmed at Pinewood Studios, the exterior (the edit masked by a passing porter) at 3 Henrietta Street, Covent Garden.
During the shoot, Hitchcock was reportedly happiest when filming around Covent Garden, a place he hadn’t visited in decades but where he’d spent time with his father.  Anna Massey later said, “It’s a brutal film, but full of things Hitchcock loved - like food, and London - and it’s a very loving portrayal of Covent Garden market.”

In interview, Anthony Shaffer said, “An old chap made his way up to Hitchcock at the market...and said, ‘I remember your father here, in all this mud.’ Hitchcock was delighted, took the man for an expensive lunch and had a long talk to him about his dad.”
The film also included this incredible Albert Whitlock matte painting of Covent Garden - the only 'live' section is the space between the green door and the truck. 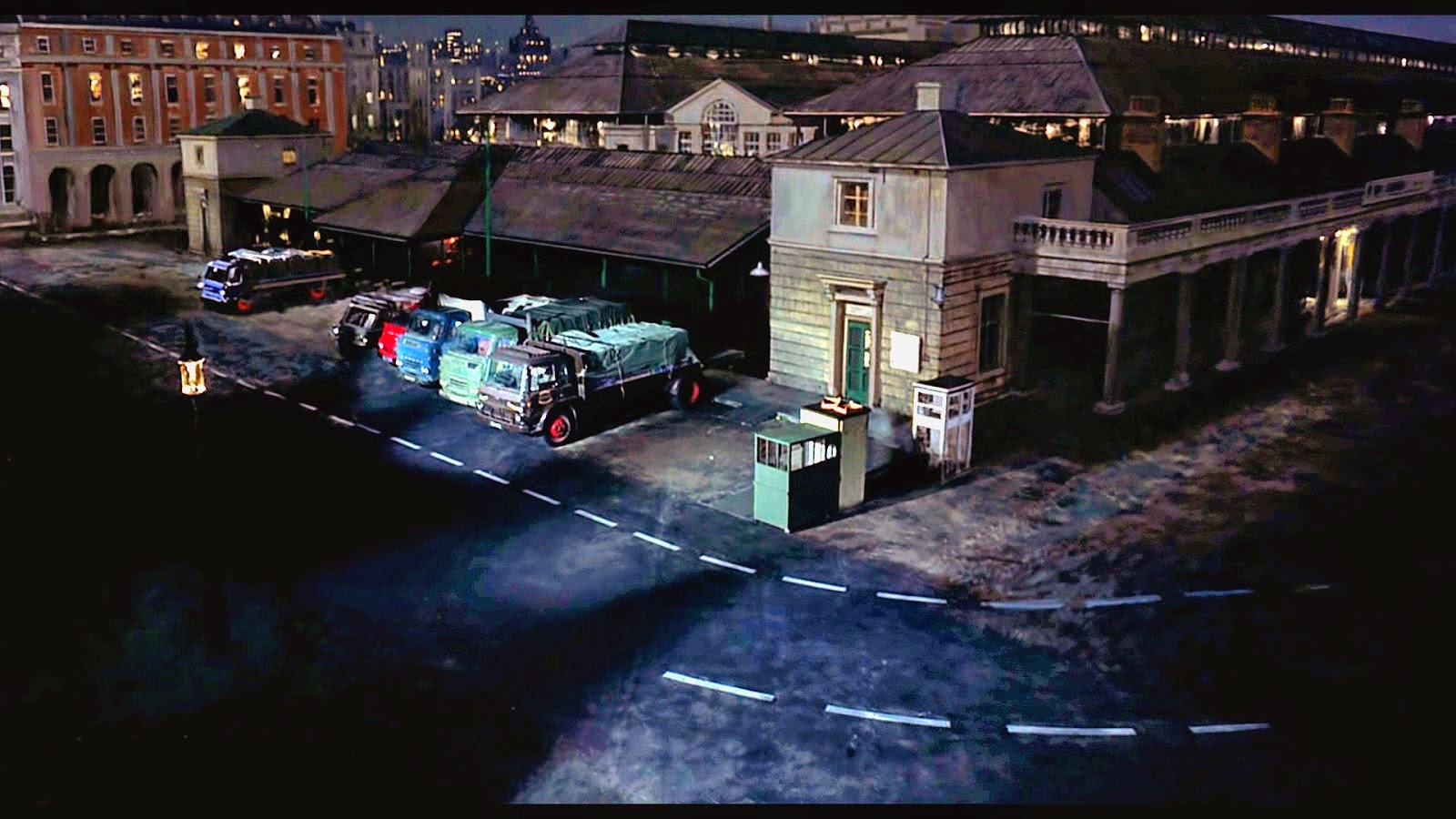 Hitchcock returned to Los Angeles on 26th October and he and John Jympson created the rough cut of the film during November.  The editor then flew back to London to supervise post-synching of the dialogue and Henry Mancini began work on the score.

Best known for Breakfast At Tiffany’s (1961) and the Pink Panther series, Mancini had also scored The Creature From The Black Lagoon (1954) and Touch of Evil (1958).  He told Catherine Scott of The Guardian, “‘Frenzy’ is very low-key picture about a neck-tie murderer, and what I have done is to just cut off the orchestra round middle C. There is none of the screeching, high, intense sounds that would be thought a little melodramatic today. It is very sparse... there's not a lot going on, but what there is will, I trust, sound pretty spooky.”

Hitchcock attended the London recording sessions in mid-December and then rejected the completed score outright.  Mancini later said, “he decided that it didn’t work, [he felt] the score was macabre, which puzzled me because it was a film with many macabre things it in. It wasn't an easy decision to accept, and it was crushing when it happened...”  Unlike his acrimonious split with Bernard Hermann over the rejected score for Torn Curtain (1966), relations remained amicable and Mancini mentions in his autobiography that Hitchcock sent him a case of Château Haut-Brion magnums.

Hitchcock then hired British composer Ron Goodwin, providing him with thorough instructions and notes regarding the new score.  The recording sessions for this took a week, beginning Monday 31st January 1972.  By mid-February, Jympson had edited in Goodwin’s score and the film was sent back to Los Angeles where small adjustments were made before the end of the month.

Due to the content - it’s the first Hitchcock film to show nudity and the sex killing was very strong for the time (it still is, to be honest) - this was the first of the director’s films to receive an ‘R’ rating in the US and an ‘X’ in the UK.

Frenzy was shown, out of competition, at the Cannes Film Festival in May 1972 where it was hailed as a “late-career masterpiece”.  He’d been worried - as hard as it is to believe now, there were people at the time who believed Hitchcock was becoming irrelevant - but the critical praise buoyed him.  At a screening in Paris, Francois Truffaut (a great fan and terrific director in his own right) said the Hitchcock touch was much in evidence and that the old master was “still experimenting”.

The trailer also features Hitchcock, in amusing mood.  “This,” he says, “is the scene of a horrible murder - it’s the famous wholesale fruit and vegetable market, Covent Garden. Here, you may buy the fruits of evil and the horrors of vegetables.” At that point, a foot sticks up out of a potato sack.

The London premiere was held on 25th May 1972 and critical reception was generally very good though several complained it was distasteful.  One of these was Arthur La Bern who wrote, in a letter to the editor of The Times, “Sir, I wish I could share John Russell Taylor's enthusiasm for Hitchcock's distasteful film. The result on the screen is appalling.”  The issue of the films graphic nature was discussed widely and both the US and UK censors had required minor cuts to the murder sequence (though Hitchcock and Shaffer had toned down the violence from the novel).

By this time, Alma had recovered sufficiently well that she was able to accompany Hitchcock on the publicity tour which lasted well into the year.

Frenzy received four Golden Globe Award nominations - Best Motion Picture - Drama, Best Director, Best Screenplay and Best Original Score - but didn’t win any.  It ended 1972 listed at number 33 in Variety’s “Top 50 Grossing Films of the Year” list, with a box-office take of $4.8m.  On a budget of $2.8m, to date it has earned over $21m.


sources:
Hitchcock.zone
Hitchcock.zone: Locations
About time magazine
Once Upon A Screen
Covent Garden: Frenzy
Wikipedia
Posted by Mark West at 09:00:00