To mark the paperback publication of her latest (and best-selling) novel, Sister, Sister, here's a guest post from my friend Sue Fortin. 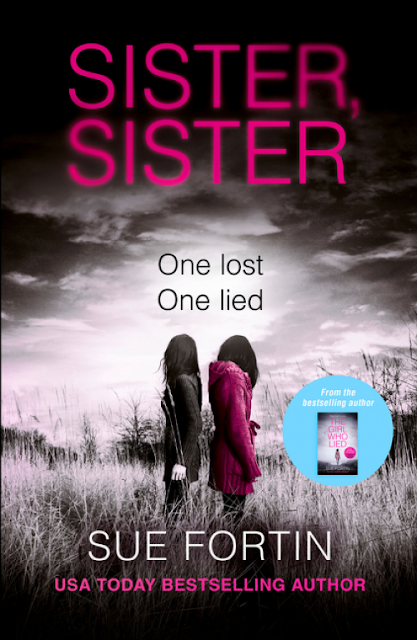 Whenever I tell someone I’m a writer, the next question that almost always follows is ‘What sort of books do you write?’. I find this question a tricky one to answer, not because I don’t know what I write, but because I’ve written in two or three different genres, yet there is a cross-over in all of them.

The first book I had published by Harper Impulse was a contemporary romance. I’ve always enjoyed reading romance and relationship stories; how the hero and heroine conquer all and finally get together for their happy ever after or at least hopefully ending.  However, I always had a yearning to write a thriller. They are the books I love to read. I’m a bit of an armchair-thrill-seeking junkie and action, mystery adventure films and books are always to ones I gravitate to.

So, when I came to write my second novel, Closing In, I decided to combine romance and crime together, giving it my own personal tagline of Crimance. I later learned that it was, in fact, officially known as Romantic Suspense. I thoroughly enjoyed writing that book, I loved the different aspects of suspense and tension alongside a relationship and this encouraged me to adopt the same style for my next book, The Half Truth. There I brought in a Russian crime element and a police investigation, as well as romance. I have to say, it was one of my favourite books to write.

Fast forward to my next book The Girl Who Lied - this had originally started off life as a contemporary romance which I had shelved several years earlier after grinding to a halt with a storyline which seemed to be doing nowhere. There was something missing and I didn’t know what. I think writing two suspense novels while this one was on the back-burner, made me realise that bringing in an element of suspense would give the book the legs it was otherwise missing. Although it was billed as a psychological thriller, in my mind, it was always a romantic suspense.

When I wrote my latest book, Sister, Sister, I had intended there to be a romantic element and to write another romantic suspense, but as the story evolved, I realised my hero didn’t really have much to say for himself and the romantic element wasn’t a key part in the story. His point of view was taken out and the book then became much more about the heroine and her struggle. Ultimately, it meant Sister Sister ticked more of the boxes psychological suspense readers expected and it slipped into that genre with ease.

Having now stepped into new territory, I’ve found there are still subtle boundaries within the broader suspense genre, which I have roughly divided into three categories.

The Twist. Where the writer delivers an unexpected surprise/turn in the story, typically at the very end, just when the reader thinks they know everything.

The Whodunnit. Where the reader has to work out who the bad guy is as the story progresses. They only have as much information as the good guy.

I think it would be fair to say that my move from contemporary romance to suspense has not been a conscious decision, but a more organic process where I’ve written the type of books I would enjoy reading myself and who knows where it will lead – perhaps one day I’ll get to write that historical novel I’ve always wanted to.

Claire Tennison leads a happy life, living with her husband Luke, two small daughters and mother and working as a solicitor.  The only dark cloud is her missing sister Alice, who was taken on holiday twenty years ago by their father but he absconded, moving to America and starting a new life.  Claire and her mother have tried for years to find the girl but now she’s made contact.  Overjoyed, Claire can’t wait to meet her long-lost sister but the young woman who arrives isn’t the person she was expecting and the joy of reunion turns sour.  It seems that Alice is different and strange, playing mind games that are pulling her into the bosom of the family whilst pushing Claire out - and she’s the only one who can see it.  She turns to her boss, Leonard, who appears to have more than a passing interest in events and her colleague Tom, with whom she had a relationship at Uni, but can they help her uncover the truth?

This is an intriguing novel, setting up the pleasant and routine life of Claire and her family before introducing Alice, who steadily begins to upend things in a beautifully played, insidious fashion that never feels overly constructed.  The characters work well and are clearly-defined (I wasn’t too keen on Luke and agreed with Tom that he was a bit of a free-loader), the children are excellent and the tense relationship between Claire, Alice and their mother is well observed and detailed.  Brighton is a well-used location, especially towards the end and the pace is strong throughout as the twists start to come (one of them is very obvious, the others less so).  With a gripping last act - I raced through it - and a clever denouement, this is a smart and very capable psychological thriller and I’d recommend it.

Sue is a USA Today and an Amazon bestselling author. The Girl Who Lied reached #1 in the Amazon UK Kindle chart and her latest novel, Sister, Sister, reached #2, with both books securing international publishing deals.

A lover of cake, Dragonflies and France; a hater of calories, maths and snakes, Sue was born in Hertfordshire but had a nomadic childhood, moving often with her family, before eventually settling in West Sussex.

Sue is married with four children, all of whom patiently give her time to write but, when not behind the keyboard, she likes to spend her time with them, enjoying both the coast and the South Downs, between which they are nestled.