The fifth, in an occasional thread, of blog posts celebrating those cheesy, sleazy old-school pulp paperbacks from the 70s and 80s, which are now mostly forgotten.  Yes, we’re not talking great art here but these books have their place - for better or worse - in the genre and I think they deserve to be remembered.

This time around, I'm looking at a novel with a bit of pedigree, though I would take exception to the cover comparisons...

Galen is an ordinary, peaceful small town. Until horrendous terror strikes … and strikes again and again, each time claiming a female victim in a fashion too hideous to contemplate.

Julian Trask, student of the occult, is used to thinking the unthinkable. As he works towards the solution of the soul-searing mystery, Galen trembles in mortal dread. For no woman is safe from the lethal lust of THE INCUBUS.

This is unashamedly pulp and all the more fun for it.  Ray Russell is a genre writer with a great pedigree (amongst many other things, he wrote the screenplay for X: The Man With the X-Ray Eyes) and this novel (first published in 1976) works a treat so long as you enjoy it for what it is, a quick and cheesy novel (though curiously coy when dealing with sex, which is ironic considering the subject matter).

Characterisation is brisk - Julian Trask, English, handsome and Porsche driving, is drawn back to the town where he once taught briefly; Laura Kincaid was a student he fancied back then, now she edits the paper he subscribes to, which is where he found out about the killings; Dr ‘Doc’ Jenkins is the town physician (I couldn’t tell how old he was supposed to be) who’s well respected and good at his job, even if his alcohol intake is prodigious (and he & Trask make for a fun double-act) and Hank Walden is the town Sheriff, a man at his wits end trying to figure out what’s going on.  There’s a big supporting cast too, with plenty of “it could be him” characters and the attack set pieces are well enough constructed that it could be anyone who turns into the monster - and what a monster the Incubus is, never really seen clearly but identifiable from his extremely large penis (which is what kills his victims - he wants to mate and rapes them to death).

With a decent small-town atmosphere, a great MacGuffin (The Artes Perditae spell book, covered in human skin so that the “i” is dotted by a navel), some great set pieces (though the section in the dormitories could have been better realised I think and the writer missed a big chance for a stalking sequence) and nicely used gore (making up for the coy sexual references), this does exactly as it’s supposed to.  As ever, your enjoyment will depend on your tolerance for (relatively well constructed) pulp, but I enjoyed it a lot and would recommend it for fans of the same.


* * *
The Incubus (1982) was directed by John Hough (who had a varied career, including making Dirty Mary, Crazy Larry which, for a long time, I only knew through the opening credits of The Fall Guy), produced by Marc Boyman ('presented by' Stephen J. Friedman, whose solid career started with The Last Picture Show) and written by George Franklin (who only has one other credit to his name according to the imdb, a 1990 telemovie called Personals).

The film was made in Canada on a budget of $5.1m, released by Multicom Entertainment Group Inc. and starred John Cassavetes as Sam (perhaps Julian was too English?), John Ireland as Hank and Kerrie Keane as Laura. It was never released theatrically in the UK (to this day, I’ve never seen it) but features a cameo from Bruce Dickinson (of Iron Maiden fame) performing with his previous band Samson.

As an aside, I like how the film poster goes in a different direction to the tone the book cover aims for (though the Drew Struzan artwork is typically wonderful).


I don't think that's really HD, do you?

As for the VHS version, they just had a field day with the artwork.  I can only assume it was never in a video shop during my teens because I would have snapped this up in moments! 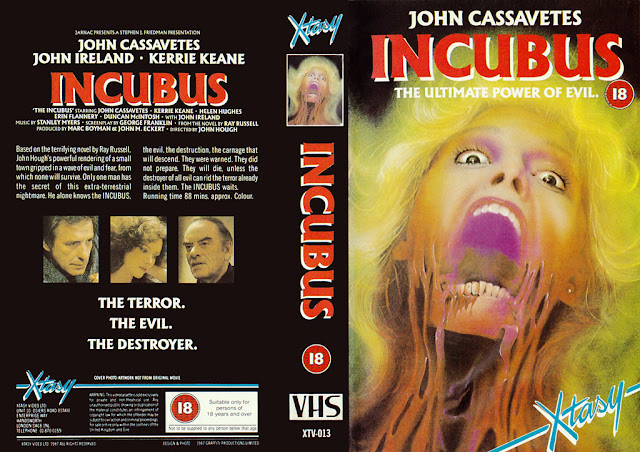 A peer and close friend of Richard Matheson, he was a prolific short-story writer and an occasional novelist, though his preferred length was the novella.  He recognised the cultural significance of genre fiction and his best-known work, Sardonicus, was a novella that Stephen King called ‘perhaps the finest example of modern gothic ever written’.  It originally appeared in the January 1961 issue of Playboy and Russell subsequently adapted it into a screenplay for the William Castle film, which was called Mr Sardonicus (1961).

An executive editor for Playboy during its formative years in the 1950s, Russell kept a strong link with the company through to the 1970s, editing (anonymously) many of the magazines anthologies, including The Playboy Book of Science Fiction and Fantasy (1966) and The Playboy Book of Horror and the Supernatural (1967).  Through him, Playboy became a showcase for genre fiction (principally SF and horror) during the 1950s and 1960s, publishing stories by Ray Bradbury, Henry Slesar, Frederic Brown, Kurt Vonnegut, Frederik Pohl, Richard Matheson, Jack Finney, Robert Bloch and Charles Beaumont (with whom Russell co-wrote the screenplay for The Premature Burial in 1962).

His other screenplays were for Zotz! (1962), The Horror of It All (1963), X: The Man with the X-Ray Eyes (1963) and Chamber Of Horrors (1966).  The superb “X”, which features a manic Ray Milland and one of the best last lines in cinema, won Russell (and his co-screenwriter Robert Dillon) a Silver Globe at the Trieste International Film Festival in 1963.

In 1991 he received the World Fantasy Award for Lifetime Achievement.

When asked why he wrote, he is quoted as saying; “I would say ... ego, guilt, boredom, the need for approval, a love of language, and the desire to entertain myself. I think it was William Saroyan who said he wrote so that he would have something good to read in his old age. That's not a bad reason.”