The Promised Land, by Robert B. Parker at 40

Promised Land is the fourth Spenser novel (following Mortal Stakes) by Robert B. Parker and it was first published in September 1976.  It went on to win the Edgar Award (presented by the Mystery Writers of America) for Best Novel in 1977.

As I wrote in my appreciation of Robert B. Parker (which you can read here), I got into crime fiction in the late 80s after watching The Long Goodbye on Moviedrome.  I read Raymond Chandler, the V I Warshawski series by Sara Paretksy, the Hannah Wolfe novels of Sarah Dunant and various stand-alone titles.  One day in early 1988, while browsing in Kettering W H Smiths, a title caught my eye.  The cover wasn’t especially inspiring but it was published by Penguin, the blurb was good so I took a chance and I’m really glad I did.

Promised Land was a revelation, a well-written, literate, amusing, sexy, violent thriller that moved at a terrific pace.  I became an instant fan of the character and writer, picking up all the novels in the series until Double Deuce, which was first published in 1992.

“I had two problems.  I had to take King Powers off of Shepard’s back and I had to get Pam Shepard off the hook for armed robbery and murder.”

For a hundred a day plus expenses, Spenser, the hard-hitting but soft-centred Boston private detective, happily agrees to find Harvey Shepard’s runaway wife.  But his assignment turns out to be less than simple.  Pam Shepard has rejected ‘domestic bliss’ in favour of liberation.  And Harvey Shepard’s underhand business deals have put him in debt with some very nasty loan sharks.  So Spenser dishes out lessons in all-American ethics as well as some hefty punches...

Spenser is hired by Harvey Shepard, a businessman, to find his runaway wife Pam.  It doesn’t take long to find her - she’s living in New Bedford with two feminist revolutionaries, Rose Alexander and Jane - but he promises not to force her to return to her husband against her will.  When he sees his old adversary Hawk at the Shepard home, he suspects his client is being threatened by local big-time loan shark and gangster King Powers, for whom Hawk sometimes acts as an enforcer.  Fired for refusing to tell Shepard where his wife is, Spenser’s then contacted by Pam who has become entangled in a botched bank robbery which resulted in the death of an old bank guard.  With help from Susan Silverman, Spenser has to try and reunite Harvey and Pam, whilst making sure Rose and Jane are arrested for the robbery and murder, as well as getting Powers off Harvey’s back.

It would be easy to say I hold this book in high regard because it was the first Spenser novel I read, but it's more likely because it was such a great place to start.  The plot works well, the pieces stacking together neatly to form a whole and yet the mystery allows character development to sit comfortably side-by-side, so much so that the novel's as much about Spenser and Susan’s relationship (and, indeed, that of Spenser and Hawk) as it is Spenser finding Pam Shepard.

Hawk, who would go on to become an important character in the series, gets a terrific introduction though it's not immediately clear (we later find out he and Spenser have known one another for twenty years) if he's friend or foe.

Shepard appeared from the door past the stairs.  With him was a tall black man with a bald head and high cheekbones.  He had on a powder blue Levi-cut leisure suit and a pink silk shirt with a big collar.  The shirt was unbuttoned to the waist and the chest and stomach that showed were as hard and unadorned as ebony.  He took a pair of wraparound sunglasses from the breast pocket of the jacket and as he put them on, he stared at me over their rims until very slowly the lenses covered his eyes and he stared at me through them.

Characterisation is key (and a big Parker strength here).  As the book progresses, a grudging admiration is shown between Spenser and Hawk which builds nicely - and leads to the events of the climax, where each man, in his own way, protects the other.  The supporting characters are vividly sketched too, including Rudy, the barman at the Silver Seas restaurant and Eddie Taylor, the overweight shovel operator who spent the night with Pam and reveals how sad the situation was for her the next morning.  Rose Alexander is militant whilst her friend Jane acts tough and often without thinking - she kicks Spenser in the balls - pushing Pam towards being herself, as long as she supports their cause.

Locations are well-used, especially Hyannis Port and Cape Cod - from both the glitzy and sleazy ends - but Boston doesn’t appear so much this time though the book opens with Spenser having had to move business premises.

I had been urban-renewed right out of my office and had to move uptown.  My new place was on the second floor of a two-storey round turret that stuck out over the corner of Mass Ave and Boylston Street above a cigar store.

Brenda Loring gets a mention but Spenser’s heart clearly belongs to Susan Silverman though when she tells him she loves him, he doesn’t respond other than to say he’s happy with how things are.  She isn’t, as there’s no wider commitment and they spend a lot of the book discussing and arguing the situation.  By putting that plot thread against his case - Pam Shepard feels trapped by Harvey’s love, to the extent they both think she’s frigid, which she’s trying to disprove by sleeping around - it allows Spenser to examine his own relationship at length.  Pam is quite taken by Spenser too - as, later, he is with her (she’s staying in his apartment on Marlborough Street, hiding out from both Harvey and Rose & Jane).  There’s also a lot made of age - both he and Susan mention they’re middle-aged on several occasions and, reading it now (not sure how my 19-year-old self felt), that’s quite refreshing.

You reek of machismo, and yet you are a very caring person.  You have all these muscles and yet you read all those books.  You’re sarcastic and a wise guy and you make fun of everything and yet you were really afraid I’d say no a little while ago and two people you don’t even like all that much would get into trouble.
- Pam Shepard

There’s plenty of whipcrack dialogue and good comic pieces, like this exchange when Pam looks at his shelf of books:

Pam: Have you read all of these?
Spenser: Yeah, and boy are my lips tired.

There are also some quite beautiful pieces too, such as “It always excited me when it rained.  The wet streets seemed more promising than the dry ones, and the city was quieter.”

But perhaps the best bit of writing is when Spenser and Susan go to the beach late one night.

Off somewhere to the right, inland, someone was playing an old Tommy Dorsey album and a vocal group was singing ‘Once In A While’.  The sound in the late stillness drifted out across the water, quaint and sort of old-fashioned now, and familiar.

They swim and make love, listening to more of the records, a perfectly pitched piece of the novel, a calm before the upcoming storm that works beautifully.

In later novels, Parker showed a quote at the frontispiece of the book to explain where the title came from but that doesn’t happen here.  It could reflect the name of the company Shepard ran that got into trouble - Promised Land, Inc. - though Spenser says “living around Boston for a long time, you tend to think of Cape Cod as the promised land”.  You could also put a case for it being Susan’s argument - she wants a commitment from Spenser but, when he asks her to marry him, she realises she doesn’t necessarily want that, just knowing the commitment is there is enough.

This novel has a lot to offer and even though it’s now forty-years-old, it’s only very minor areas that date it - fashions and revolutionary ideals, mainly.  It’s a great read, thoroughly deserving of the Edgar win and very much recommended. 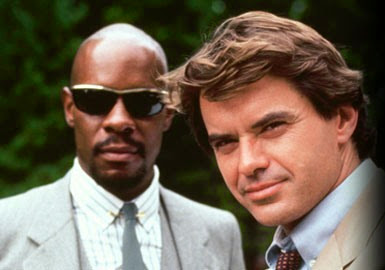 The novel also served as the basis for the pilot of the Spenser: For Hire TV series, which starred Robert Urich as our hero, Barbara Stock as Susan Silverman and Avery Brooks as Hawk.  As much as I liked Urich, I don’t picture him as Spenser, but Susan looks like Ms Stock in my head and Hawk is very definitely Avery Brooks.  In fact, when Hawk says “Spenser” in the novels, I hear Brooks’ “Spen-suh” delivery.

Promised Land, which was first shown on the ABC Network on 20th September 1985, was directed by Lee H. Katzin and written for the screen by John Wilder, based on Parker’s novel.  For some reason, the Shepards were renamed as the Pattersons (Geoffrey Lewis played Harry, though why he couldn’t be called Harv remains a mystery and Donna Mitchell played Pam), Lt Quirk and Sergeant Belsen (Richard Jaeckel and Ron McLarty, respectively) appear (they’re not in the novel) and Chuck Connors was King Powers.