"We're All Individuals!" - The Life Of Brian, under the stars with Purple Rain

Regular readers might remember that last year, my friend David & I went to see Close Encounters Of The Third Kind and An American Werewolf In London at Stanwick Lakes, in an open-air programme run by Luna Flix.  We had such a great time at both events that we decided to do it again this year. 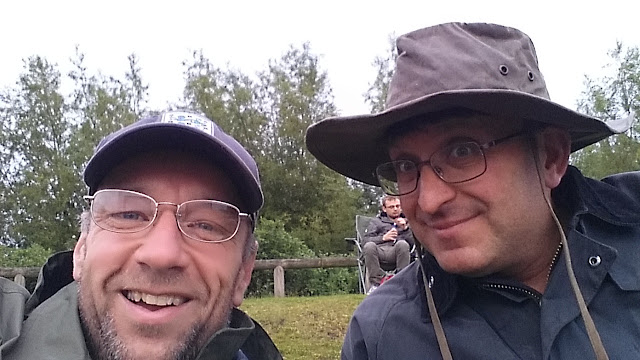 Friday evening was the first chance we had to get along to any of the showings but we were determined to see Life Of Brian.  The British weather apparently had other ideas and, right up until the morning, it was touch-and-go whether the screening would be postponed (worse, there was a heavy downpour during the day) but Monty Python won out in the end.

We got to Stanwick Lakes at the same time, parked next to each other, loaded up our supplies (he’d brought the chairs, I had the Haribo) and made our way to the ‘outdoor theatre’.  Somebody had already claimed ‘our spot’ (a favourite from last year) but we quickly found a place, settled ourselves down, put on our waterproofs (it was spitting) and caught up on each others news.  As always, the Luna Flix team had thrown themselves into it - Lucy, on the gate, was wearing a beard, Simon the head honcho was rehearsing some quotes and the refreshments man was dressed up selling “larks' tongues, otters' noses, ocelot spleens” and convincing female members of the audiences they needed beards - brilliantly, most of them complied! 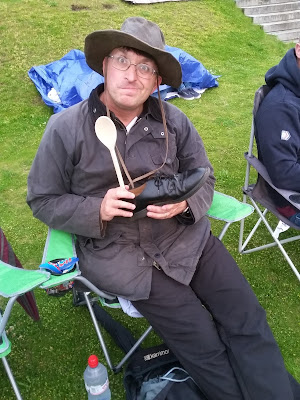 The set up was the same as last year - with a big inflatable screen, a tremendous sound system (you could hear it clear across the lake in the car park) - and this time we had a selection of Python songs blasting us until it was dark enough.  The only downside to this was that it made conversation difficult - we’d be talking away, one of us would hear a song we liked and we’d drift off, coming back to our chat after it finished.

The film began just before ten, as the last orange faded from the sky and the geese flew over the lake and it was great.  Billed as a ‘quote-along’, the team had sent out sheets of dialogue and lyrics and we’d been encouraged to take along our own wooden spoons, shoes and rocks, to be deployed at key moments.  The film looked great - it was the first time either of us had seen it on the big screen and, as David said, there were so many new things he noticed - and the humour was as pitch-perfect as I remembered it.  There was also a wonderful bit, where Simon The Holy Man breaks his 18-year vow of silence - the film paused and someone came racing out of the refreshments stand, shrieking and yelling about his poor foot, before running off as the film restarted - great fun.

The film finished at 11.50 - with the entire audience singing along to Always Look On The Bright Side Of Life - and we made our way back to the car park, agreed that it had been a great choice to see in the open air.


Alison didn’t get to any of the 2015 schedule and, based on me and David raving about it, was determined not to repeat that.  We were originally planning to see Ferris Bueller’s Day Off but, following the untimely death of Prince, it was rescheduled and Purple Rain was added to the programme.  Alison had already seen it, I hadn’t and so we decided to go. 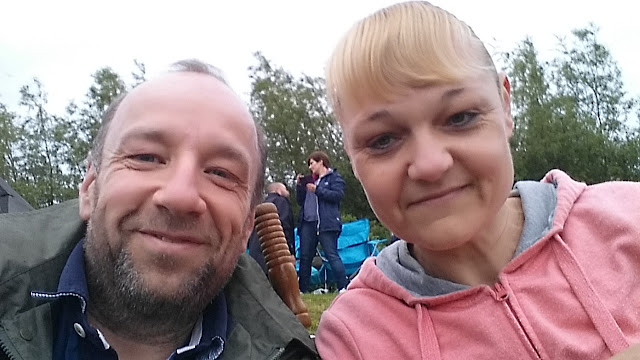 Saturday was another changeable day, weather-wise - Dude & I spent the afternoon shopping in Leicester, under various hues of sky and a few showers - but apart from the odd spit of rain, it was a dry evening.  There was a big crowd in, a lot of Prince fans and a great atmosphere with plenty of the man’s songs playing until showtime, which was again at 10pm.  Alison was excited - she really liked the film but hadn’t seen it for ages - and I was very much looking forward to it.

So what did I think?  Very much of its time (it was released in 1984), it looked terrific (with a beautifully crisp image) but it was a bit uneven, with iffy acting (though Morris Day was fantastic), an occasionally foggy story and some unexpected violence - but the soundtrack made up for everything.  Once The Kid is on stage - and we’re essentially treated to a Prince concert film - everything else is forgiven and since the film was apparently designed to showcase his talents, it succeeds admirably.  Which is the thing really, it’s all about the music.  Whether you were a big fan of his or not, if you’re about my age - mid-to-late 40s - then it’s a fair bet he soundtracked at least part of your teenage life and who didn’t dance to 1999 at a disco (school or otherwise)?  In fact, to make you feel old, that song was released in 1982 (I didn’t really notice it until the 1985 re-release, to be honest) which means it was as far from 1999 as we are now!

Ending with that freeze-fame (and a bit of a sing-along - what a great way for me to discover the film!), we had a wonderful time and Alison thoroughly enjoyed the experience, with the Luna Flix team again putting on another great presentation.  Roll on the next one!


If you’re local, check out the schedule here and pop along, it’s really good fun.
Posted by Mark West at 09:00:00