I'm pleased to report that "Tales From The Lake vol. 2", from Crystal Lake Publishing, edited by Joe Mynhardt, Emma Audsley & R.J. Cavender, has just been published.  It features my story "Photograph Of You" and I'm chuffed to be in an anthology alongside so many great names (I mean, seriously, look at that line-up!). 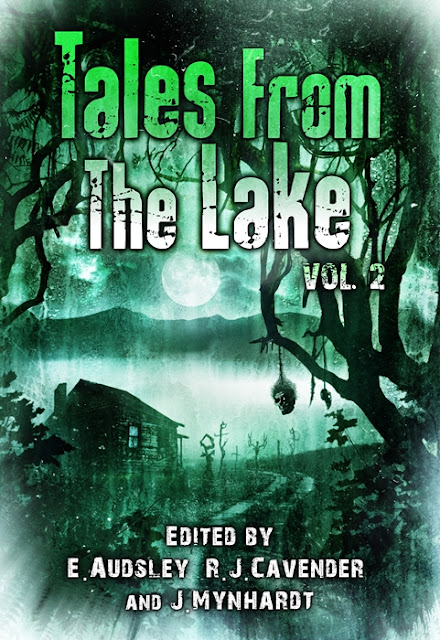 Out of the Woods, by Ramsey Campbell

The God of Rain, by Tim Lebbon

A Grand Perversion, by Ben Eads

Photograph of You, by Mark West

The Lake is Life, by Richard Chizmar

Damned if You Do, by Jack Ketchum

The First Header, by Edward Lee

Love Amongst the Redback Spiders, by Aaron Dries

When Joe Mynhardt got in touch with me during summer 2014, inviting me to contribute to this anthology, I was excited to be part of such a cracking line up.  My heart attack meant I missed the original deadline but he was kind enough to hold my place and give me some extra time.  When I came to start writing I initially drew a complete blank, which panicked me somewhat and I spoke to Steve Bacon about it (hence the story is dedicated to him).  We brainstormed some ideas and one of them - "A woman finds a series of weird photographs that get progressively more frightening" - really sparked with me and I was finally off.  As it was, the writing was quite a painful process (the first half took a fortnight, the second half a matter of days), stemming from my fear I couldn't do it and the fact that I was holding Joe up (though he was a delight all the way through).

The story features Cindy, heavily pregnant with her partner Steve's baby, who is fretting that he might be playing away.  Looking through some photographs she'd taken of him in the park, she is surprised to see that in one of them he's talking to a woman Cindy hadn't seen on the day

Her mobile buzzed as Cindy was waiting for the kettle to boil.  She put her travel-mug on the kitchen counter, delved into her bag for her phone and looked at the display.

There was a pause.  “Nothing, just checking.”

Cindy took a deep breath, making it loud enough that Angie could hear.  “I’m fine, honestly.  I look like the side of a house, but I’m fine.”

There was another pause and Cindy thought she heard Angie draw breath, as if she was going to say something.  “Is everything okay Angie?”

Frowning, Cindy closed the call.  Her phone wallpaper was a selfie she’d taken on a beach in Devon, with her too close to the lens and Steve behind her, his eyes wide and his big grin partially hidden.  It always made her smile - photographing him made her smile.

She pressed the gallery button.  They’d been to the common at the weekend and she’d left her camera at home but had taken several with the phone - a good substitute but not in the same class as her Nikon.  The first picture was Steve standing at the pond, throwing lumps of bread at ducks and swans that weren’t interested at all.  The next photo was another selfie, but it was unfocussed and she seemed to have at least three chins.

"Not the most flattering,” she said.

The third picture was Steve walking towards her, a big smile on his face.  He’d taken a call, standing well away from the trees to get a better signal and she’d walked on a little way.  The last picture was him in the distance, his back mostly towards her, the phone pressed to his ear.

Cindy looked at the photo, looked up at the kettle as it clicked off, then back at the picture.  The woman was standing right in front of him and they were clearly talking to each other.  She was blonde, her curly hair blown by the wind, her eyes wide, her mouth a thin line.  She was wearing black boots, a knee-length skirt and a black jacket she was hugging to herself.

Cindy didn’t remember seeing a woman standing with Steve when she took the photo.