I'm pleased to announce that "The Hyde Hotel", a new anthology edited by James Everington & Dan Howarth, has just been published by Black Shuck Books.  The book is available in print and digital editions and amongst others, it features my story "The Sealed Window".  Looking at that ToC, I'm chuffed to be included. 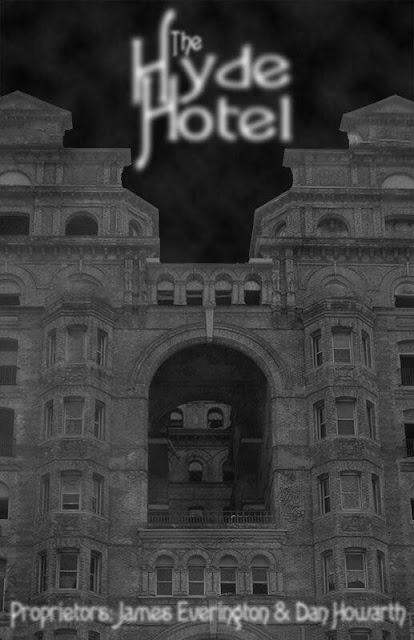 The Hyde Hotel Welcomes You…

The Hyde Hotel looks almost exactly as you’d expect it to: a faceless, budget hotel in a grey city you are just passing through. A hotel aimed at people travelling alone, a hotel where you know so little about your fellow guests that they could be anyone… and where, perhaps, so could you. But sometimes things are hiding in plain sight, and not everyone who stays at The Hyde gets a good night’s sleep…

CHECKING IN  by James Everington

THE VIEW FROM THE BASEMENT  by Alison Littlewood

THE EDIFICE OF DUST  by Amelia Mangan

WRATH OF THE DEEP  by Simon Bestwick

THE SEALED WINDOW  by Mark West

CHECKING OUT  by James Everington

The book is available in print and digital editions from Amazon


I wrote "The Sealed Window" around the period of my heart attack in August 2014 - first draft before, all revisions afterwards - and I was glad to have it there, to pull me back into writing.  James & I had developed a nice friendship over the past year or so, stemming from a mutual respect of each others writing and sealed when we hung out together at the Andromeda One Con and he emailed me, asking for a story “about guests staying in the Hyde Hotel; stories should be dark and weird although they don’t have to be traditional horror.”  My starting point was something I remember Alison, my wife, telling me - she had to go to London on a course and was put into the tiniest single room she'd ever seen.  It happened to be a particularly hot summers day and she quickly discovered the window had been painted closed, which I would have found too claustrophobic to stay in.  The very thought of that has stayed with me for years and this was the ideal place to use it.

My story concerns Hoffman who hates the city he has to visit, to go on a course.  Booked into the Hyde Hotel where everything seems just that little bit off, he discovers that the window in his very small and very warm room won't open, making it oppressively claustrophobic.  As the evening wears on and he is forced to listen to his amorous neighbours (as well as finding odd, sleazy programmes on the TV), things begin to unravel...

It was after nine by the time Hoffman got back.  The foyer of the hotel was deserted - no doorman to greet him, no receptionist behind the desk - and he trudged up to the third floor feeling hot and annoyed.  The streets had been heaving with people, all of them locked into their phone screens and not caring where they walked or who they walked into.  The couple on the next table in the lovely little Italian restaurant he found spent their entire meal engrossed not in each other, but in their phones, pausing only to fork in fresh mouthfuls or photograph their food when the orders arrived.

He walked along the corridor, the carpet swallowing the sound of his progress.  The fancy work on the ceiling looked different now but he couldn’t tell why.  He paused at door 39 and debated going back out, to avoid spending too much time in the hot little room but, then, maybe the window was fixed.

Hoffman quickly opened the door and went in.  The first thing he noticed was a heavy bleach smell, the second was that the window hadn’t been opened.  He walked over and tried the handle but, if anything, it moved less now than it did before.

His anger simmering, he flopped onto the bed and reached for the phone.  He dialled reception and the phone rang for two minutes and forty two seconds but nobody answered it.  The ambient heat in the room, combined with the heat his own anger was generating, made him feel even worse and with a growl he stalked into the bathroom.

There was no smell of bleach in there, which surprised him.  The partly opened window let in a little fresh air and he glanced at the bath, which looked spotlessly clean.  He went back into the room, got his toilet pack from the overnight bag and had a long, cool shower.