I'm pleased to announce that "Ten: Thou Shalt Not", a new anthology edited by Alex Davis, is due to be published by Tickety Boo Press next week and features my story "The Goblin Glass".  The book is available in print and digital editions, though all pre-orders of the signed, limited (to 150 copies) hardback will also receive a free copy of the ebook edition. 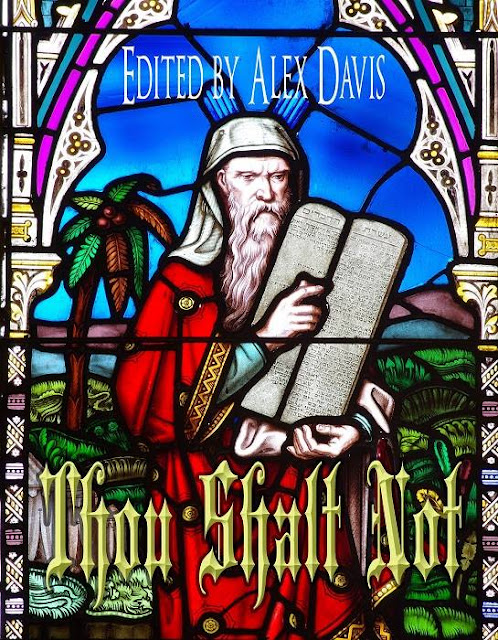 The Ten Commandments were laid down in the earliest days of mankind, a guiding set of principles for our everyday lives. For centuries these tenets have shaped our morality, our laws, our societies. But what happens when these commandments are tested – and even broken? Step inside ten tales exploring the dark consequences of breaking these most ancient and sacred of rules...

All the Best Tunes
Clare Littleford

I was really pleased when Alex approached me, giving me a pick of 'sins' to choose from and I went for 'Thou Shalt Not Steal'.  I had the original idea by the end of my commute the day he emailed me and pieced the rest of it together during my evening walks over the next few nights.

"The Goblin Glass" features Warren, who is sent by the local crime boss Mr Skinner to steal the eponymous mirror from an apparently abandoned house in a run-down, forgotten Gaffney street.  I homaged the Goblin Glass from "The Secret Of The Haunted Mirror", written by M. V. Carey (which I blogged about here) and the story is dedicated to her (though my nasty tale bears no resemblance - mirror frame aside - to hers).


“It seems to me we’d best start you off with a little breaking and entering, before we perhaps use your mechanics skills.”

Skinner took another sip and wiped his lip again.  He cleared his throat and leaned forward, his elbows on the table.  “Have you ever heard of The Goblin Glass?”

"Thought not.  It’s a mirror that was once owned by the magician Chiavos and it has an ugly, wrought iron surround which depicts goblins and sprites, hence the name.”

The Goblin Glass?  A magician?  Was this some kind of wind-up?

"It’s alleged to have magical properties, in that it allows the owner to see the future and manipulate time, but I think that’s a load of bollocks.  However, my wife doesn’t.  Do you know my missus?”

“I think so,” said Warren carefully, as it dawned on him that this absolutely wasn’t a joke - Skinner wouldn’t mock his wife.  Before she married, everyone knew her as Crystal Ball Carol - lovely girl, very pretty but absolutely adamant that she could read people’s fortunes.  So adamant, in fact, that people took the piss out of her until she hooked up with Skinner.

“Well, through various methods, she’s found that The Goblin Glass is here in Gaffney, in a private house.  I want you to break in, grab the mirror and bring it to me.”

Skinner reached into his inside pocket and pulled out a narrow piece of paper.  He unfolded it and passed it to Warren who looked at the Internet print-out.  “Ugly bastard, isn’t it?”

Warren nodded.  The mirror itself didn’t seem unusual but the metal frame was grotesque.  It had been moulded to look like tangles of tree roots and where they parted, little faces peeked out - demonic looking creatures, some of them with horns, others with slits for eyes.

"A Spanish magician called Chiavo claimed he could look into the mirror and see the goblins who predicted the future for him.”  He looked at Warren.  “Who knows, I just want it.  It’s apparently no bigger than a normal bathroom mirror and so shouldn’t be a problem to carry.  Do you want to do it?”

There was no question.  “Of course,” said Warren.


You can find a brief interview with me, where I discuss how the story came together, on the publishers site at this link

The ebook is now available on Amazon