Writing and a positive mental attitude...

We’ve just come back from our annual holiday which, this year, was spent in a place called East Ruston on my beloved east coast.  The Cottages4U website said it was quiet and they weren’t kidding - we were about three miles from Stalham (itself not exactly the hub of the universe) and the place was a hamlet, a small collection of houses, with no shop or pub or any amenities really.
And it was wonderful.  There was hardly any traffic (I quickly found a good route for my daily 2m power walk and saw perhaps three cars over the whole time), there were no street-lights (you forget just how dark the night is until there aren’t any street lights) and more importantly, there was no wi-fi.  We talked, we played footy or went for little family walks, we played Scrabble and we enjoyed the absolute peace and quiet, though it wasn’t isolated.  Our cottage was one of ten in a group and at least half of them had kids in, so we could hear people about during the day and Dude had some company close to his own age. 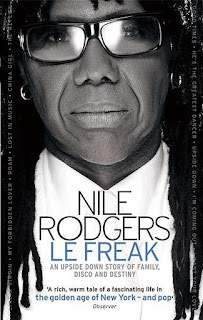 I took along “Le Freak”, the Nile Rodgers autobiography (I seem to prefer reading autobiographies when I’m on holiday) which was great (you can read my review on Goodreads here), especially how he’d started the Chic organisation with Bernard Edwards and the different creative adventures he’d had.  That, as it often does, got me thinking about my own creativity and the quiet (and lack of Net access) gave me the space to reflect.

Creativity is one of those odd things to discuss (though, strangely, I often end up doing just that).  If you’re engaged in a creative project - writing, painting, composing music, making films, crafting items, whatever - you know how it feels, you understand the pressures, the highs, the lows, the bits that make sense, the bits that don’t work at all; everyone else sees you sitting there chewing on the end of a pen.  But reading “Le Freak”, where Rodgers is aware that he’s creating great work but still astounded that it’s affecting the zeitgeist, is refreshing.  It’s refreshing in the same way as when you hear writers (in my case) you admire talking at Cons, about their processes and concerns - it re-inforces what you think and feel.

I’m on a bit of a creative roll at the moment, which is always nice.  I’m just about to start the third draft of a war-based novella (which was asked for - I’ve never written a war-time set story before) and I’ve really enjoyed the process, researching it and asking my Dad (a WW2 buff) odd questions, plus I’ve had some great feedback from  my pre-readers.  Once that’s done, I’m into the third Mike Decker story (which is already plotted), that has both a home to go to and will be my critique piece for the next meeting of the Northampton SF Writers Group.  After that, I have two more asked for short stories, then I can get to the novella I’m crafting out of half the “failed novel” pitch I did last year.

Right now, I feel good about my writing (which doesn’t happen all that often) and that peaceful week on the east coast helped emphasise that, almost as much as if I had Major Anya Amasova herself sitting there extolling the virtues of a "positive mental attitude".  I played through scenes (from the novella and the Decker short story) in my head as I walked, I read “Le Freak” without the distractions of emails pinging in or Facebook updating and I went out and did things that could inspire future story ideas or give me experience I can use on the page in the future (a boat sequence in the novella is now changed because we hired a boat - Dude did most of the work - to sail up the Thurne).

Now we’re back home, I’m writing this in between revisions with my troop of plucky soldiers and although I’m plugged back into the Net that feeling of last week, that sense of positivity and believing in what I'm doing is still lingering.  And I plan to capitalise on it.
Posted by Mark West at 09:00:00