Last night saw the inaugural Fox Spirit Writers evening at Leicester Central Library, organised by FS Head honcho Adele Wearing.  I was chuffed to be asked and appeared on the panel with James Bennett and K T Davies (both of whom I’m friends with, though it was the first time we’d been at the front together) and Hardeep Sangha, a surrealistic poet who I was meeting for the first time and whose debut book “The Velocity Of Constant” was being launched.  Thanks to traffic (nice work, Leicester City road planners), I got there late, so just time for quick handshakes all round (nice to see Ewan, K. T.’s partner, again along with Jay Eales & Selina Lock) and then we were in front of the audience (which wasn’t a bad size).  As a nice touch, we were in the kids section of the library so everytime I looked over at James, I could see the Very Hungry Caterpillar cavorting on top of a bookcase. 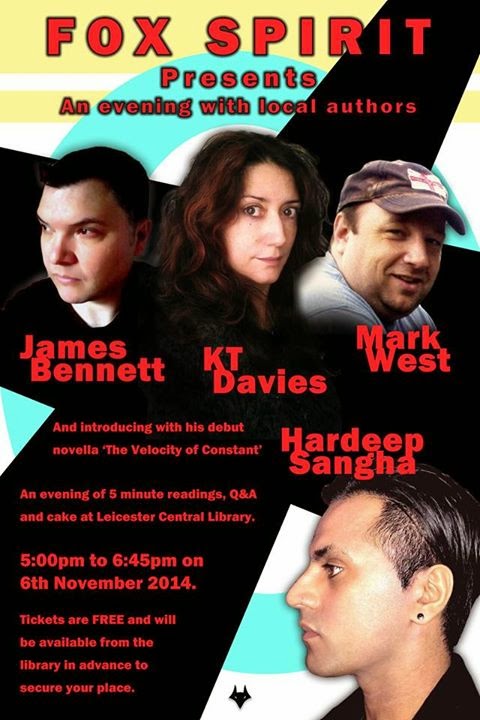 After an introduction by Adele, James did the first reading, which went well and K. T. followed him, standing up and delivering it so well that the next person (in this case me) had a tough act to follow.  I read the first few pages of “The Mill”, which seemed to go down well and Hardeep followed me.  Adele then opened the floor to questions and got the ball rolling with a few of her own, that were smart and open-ended enough that they provoked plenty of discussion (and allowed K. T. to compare writing fantasy with living in a house that smelled of cat pee!) and led to more from the audience.  I had a great time, listening to my fellow panellists and getting the chance to air my own thoughts.

The time whisked by and when the Q&A was over we mingled, tucking into the delicious fairy cakes Adele had provided.  I chatted with Jay & Selina about future projects, then discussed character and people watching with Ewan, James and members of the audience, before catching up with Hardeep (and I got him to sign his book for me too).

After promising to meet up for a meal - we writer-types do like getting together - with everyone when James was back in town, it seemed as though half the group went on to the Phoenix Theatre for an Angry Robot-associated event whilst Adele & I walked back to our cars (we were both parked in Newmarke Street) and caught up.
All in all it was a great evening, which I was really pleased to be a part of and I hope it’s the first of many!  Great fellow-panellists (and it’s always a treat to do a reading), great crowd, great organisation - what more can you ask for?
Posted by Mark West at 09:00:00