An Evening With Sir Roger Moore (in Northampton)

So, this happened last night… 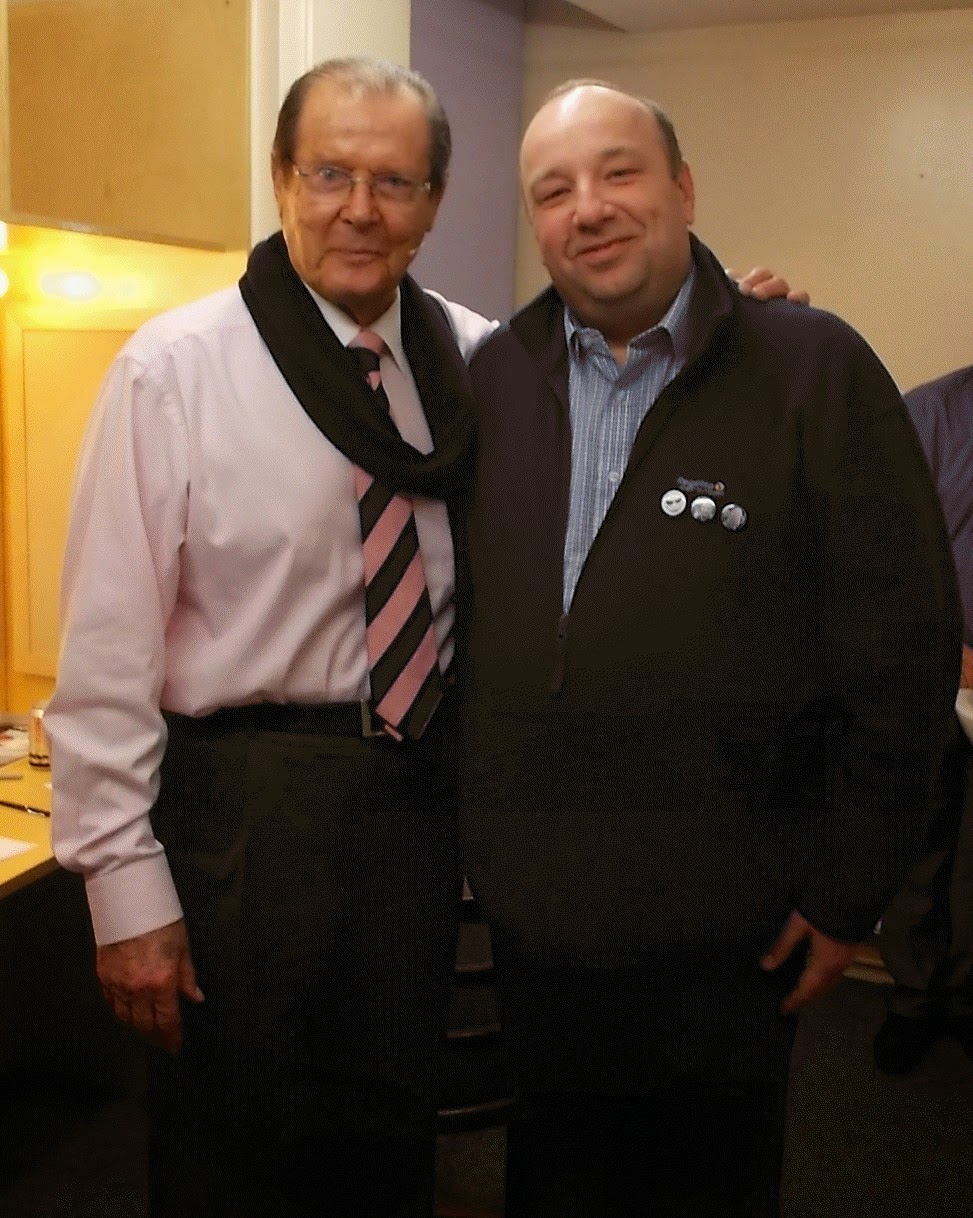 In November 2013, Alison & I went to the Milton Keynes theatre to see “An Audience With Sir Roger Moore” (which I blogged about here) and it was bloody brilliant.  When we found out that he was touring in Autumn 2014 (and would be appearing at Northampton Derngate), it took the pair of us about two seconds to decide we were going again and she booked us tickets, front row centre.  What a star my wife is.

It’s perhaps worth mentioning here, in case you didn’t know, that I’m a huge fan of Sir Roger Moore, starting with “The Persuaders”, the Crimefighters books (blogged about here) and through the Bond films (the first two of which I saw at the cinema - blogged about here - were “Live & Let Die” and “The Spy Who Loved Me” on a double bill) and he’s a real hero of mine.

Last month, Sir Roger published his latest book “Last Man Standing” (which I reviewed here), a collection of anecdotes from Hollywood and it was a great read.  I happened to mention it on Twitter and got a retweet (which made my day) and that started me thinking.  At a Memorabilia fair at the NEC, I’d seen Gareth Owen (Sir Roger’s biographer and his interviewer on the tour) and went over to shake his hand to thank him for the show.  What if, I thought, I emailed him and asked if it was possible for me to get into a meet-and-greet if they had one.  Remembering sage advice from my youth - if you don’t ask, you don’t get - I did email him (along with a link to my review of the previous show and further mentions of Sir Roger) and he replied, saying that we might be able to sort something out...

I spent most of Monday 6th October feeling nervous (not helped by also having an interview about my writing on BBC Radio Northampton - thanks John Griff!) and at 6.55, I was outside the stage door (alongside autograph hunters who were telling me it was no good, he wasn’t coming out).  I told the lady at the door who I was, she went off and then Alison & I were let in, led down narrow corridors and pointed towards a door that had a sign saying “Sir Roger Moore” pinned to it.  Surely not…

The door opened and Gareth Owen gestured for us to go in.  Sir Roger was sitting in front of the mirror, signing bookplates and his wife, Lady Kristina Tholstrup, was standing to the side and I was completely lost for words.  Sir Roger got up as I walked over and Gareth introduced me (they initially thought I was someone else, a mistake quickly rectified) and mentioned that I’d given his last show a good review on the blog, which made my hero smile.  I looked at him and tried to take everything in - he’s tall and a real commanding presence and - I’ll admit - I was in awe of him.  Sir Roger shook my hand and I can’t for the life of me remember anything I said after that, though Alison assures me I told him I’d been a fan of his for a long time, that it was a real honour to meet him and that I’d loved his books.  I snapped back to reality when he asked if I was watching the show and I said “Yes, my wife Alison bought the tickets” and when he shook her hand, he introduced his wife to us.  We chatted for a while, he posed for pictures and then we took our leave, as I thanked him again and shook his hand again and tried to take it all in.  Alison & I made our way outside and when I checked the photographs had come out okay, I found that my hands were shaking.  Wow, what a moment.

The tickets were, indeed, front row centre and we got settled in as Sir Roger came on stage at 7.30pm.  He made his way to his seat (a little more unsteady than last year maybe but still ramrod straight) and sat down, first moving the Union Jack cushion off it and saying “Sean Connery, Andy Murray.”

Hosted, once again, by Gareth Owen, the show was a real treat (over 2 hours!) and Moore’s abilities as a raconteur were superb - stories went off at tangents, we heard about his early childhood (the baby photo was funny), his early career as an animator, the moves to Hollywood and back (with Owen inserting gleeful “you were fired” comments at key points) and TV, with “Ivanhoe” (we were treated to the theme tune) and “The Saint”.  Following the interval, we got anecdotes about “The Persuaders” and then moved onto Bond (including “Bond…James Bond”, which got as much applause as it did last year).  Within this section there were a couple of poignant moments as he talked about old friends who’d recently passed away - he recalled some of the fun he’d had working with Richard Kiel (I knew the little boy on the beach in “The Spy Who Loved Me” was Kiel’s son, I didn’t realise he’s now an eminent cardiologist), his frequent director Andrew V. McLaglen and Geoffrey Holder.  Following a lively Q&A session, he wrapped up the show with a brief discussion of his work with UNICEF and quoted a poem Audrey Hepburn had told, which was quite emotional.  He left the stage to a standing ovation and as we left the auditorium, Alison & I said, “if he tours again…”

It was a terrific show and Sir Roger was on top form, telling stories and making the audience laugh (including some risqué remembrances) and name-dropping with the best of them, whilst also imitating certain key players voices when the situation called for it (his Tony Curtis is very good).  The term legend gets bandied around a lot these days but Sir Roger Moore genuinely is one and it was reflected in the show - funny, poignant at times but with a real lust for life apparent throughout and he had the audience rapt from the off.

Well done, Sir Roger and thanks also for being so nice to an idiot who was smart enough to send an email asking to see you but not clever enough to remember what he was saying when stood in front you.  I’m an unabashed fan of long standing and to finally meet my hero was a true highlight for me.