For those who don't know - or weren't around in the late 70s - there was a childrens art TV show on called "Take Hart" (which ran from 1977 through to 1983).  Presented by the wonderful Tony Hart, he explained how to create paintings and effects and was assisted by a little sidekick called Morph, who took up space on his desk and generally created havoc.

Morph was a plasticene character, one of the first creations by Aardman Animations (now much more famous for Wallace & Gromit) and appeared in one minute 'shorts' which usually started with Tony saying something to him, before the animation took over.  Morph only ever spoke gobbledygook, his point often being made with expansive gestures but communicated perfectly well with his friend Chas (who was the naughty one of the pair).  He lived in a wooden box (how I wanted one of those as a kid) and, due to his being made of plasticine, was able to morph himself into different shapes as required.

I loved the character but when I stopped watching kids TV, I stopped watching Morph (and avoided the Neil Morrisey version like the plague) though I was bought some of the merchandise (a bendy Morph now stands on my Three Investigators shelf, holding the bookmark).  In March 2009, shortly after Tony Hart passed away, a flashmob of Morph characters was organised in London outside the Tate Modern art gallery and he also appeared briefly in an epsiode of "Ashes To Ashes".

In 29 October 2013, Peter Lord (co-creator of Morph and co-founder of Aardman Animations, both with Peter Sproxton) created a Kickstarter campaign to make new episodes.  The target was for £75,000 (to be matched by the studio) for 12 new one minute episodes and was reached after 9 days, with over 1,700 backers (of which I am proud to be one).  The campaign was so successful that when it ended (with over 2,600 backers), it had raised more than £110,000 and so 15 new episodes have been produced, all of which will debut on Morph's YouTube channel, starting on the Morph of July.  As a supporter I've already seen them and thankfully they're really very good - modern, certainly, but easily retaining the spirit of the originals (and Dude particularly loved the football episode).

I'm pleased to see him back, I'm pleased to have a piece of my childhood remain as pure and funny as it was back in the day and, hey, it's MORPH!


and here's Morph, as he was back in the 70s...
On Twitter, Aardman are running a #Morphie hashtag, where viewers and supporters post a selfie of themselves and their own Morph.  You know me, never backwards at coming forwards, here's mine... 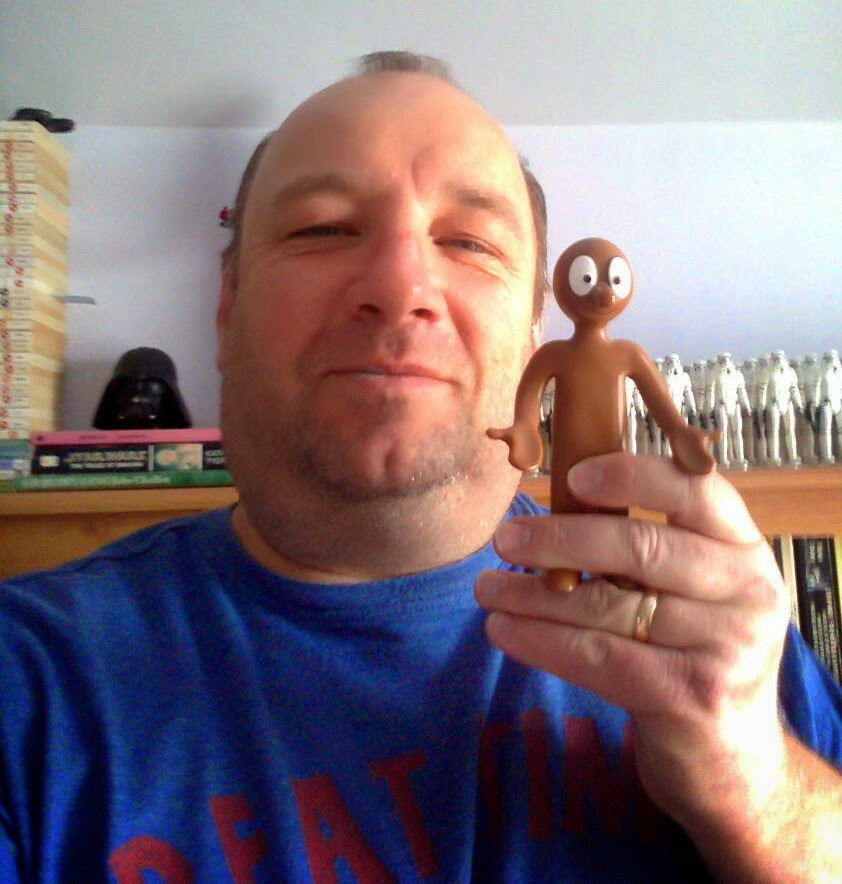